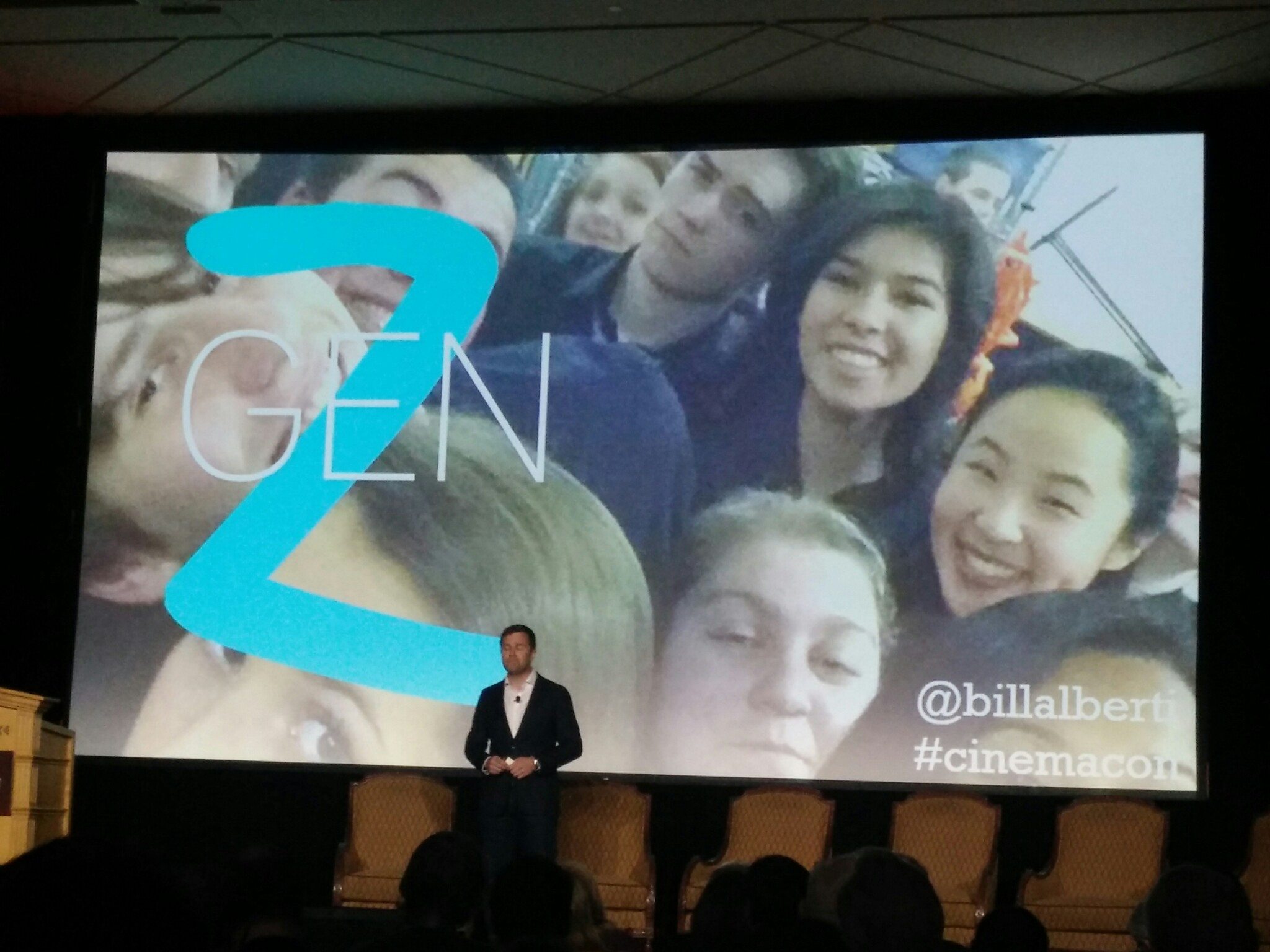 The declining cinema attendance amongst kids and young people has not gone un-noticed and CinemaCon to its credit tackled this issue at the 2015 get together by inviting several speakers that talked to the issue of what therealities are for those under 25 and how cinemas can understand them better, so that they can hopefully attract them to the cinema of the future.

The scope of this challenge should not be under estimated, but the first step of any recovery process is to aknowledge the problem and talk openly about it. The first speaker was Bill Alberti (@billalberti) from Communispace on the topic: “World War Generation Z: the Global Challenge to Attract New Audiences.”

“My first time here; appreciate the invitation.” [Asks audience how many have children under the age of 20 in their home.]

Bill: “For the next half hour, hold back the ‘my kids or nephew don’t do that’, but listen for possibilities and how we can change and adapt. Because they don’t have to adapt to us. These are the generation that will dictate all the categories we have come to know.

Mandy Messer is 12 year old in 6th grade. Loves to play Templee Run (iPhone). But why can’t the character be a girl. Lead character’s name is ‘Guy Danger’. You can pay $1 to play to be a girl or collect tokens to become a girl. [Pay for sex change!]. Out of 50 games only in 5 can you be the girl [character]. Rest you pay to switch gender. Average price to be a girl in a game is $7.53. “There were some you could be a potato,” but not a girl.

She wrote to the Washington Post and they published her letter as an Op-Ed piece. Went viral. Got back to developers of the game. No reason she couldn’t be a girl. Developer herself was a woman  Other developers got on the bandwagon. This conference i not about underlying sexism in games but about a young person challenging the staus quo that we often don’t realise.

[Bill puts up another picture of a group of girls, one of whom is wearing a red helmet.]

Red helmet Becky. Sophmore in high school. Confident girl. Asked, “What was last film you saw?” It was ‘Remember Me’. Talked about experience. Watched it on Netflix while they were doing homework. Friend watching same time in a different building. Would stop the movie to discuss plotlines with friend.

“What was last film that she saw in theatres?” It was “Into the woods” with her cousin. Read the book [?] and compared it. Contrasting the online and cinema experience. But she said there was no centre to stay beforehand in the cinema.

Great experience for the two hours that the film lasted, but nowhere to go beforehand. Why see it with her cousin? Parents are frequent cinema goers. And this generaton has good relations with its parents. But she didn’t want to go with her parents to the cinema, whereas going to concerts is different. Used to go in a big group but it is ‘too hectic’.

“Kids today…” people say, ‘that’s true for every generation’, like ‘kids grow up faster’. Think about how we have to adapt to them and their expeience.

“The biggest difference is ACCESS. They can access anything, anyhow at any time. They are learning faster, they are multitaskers. They take expectations from other categories and move them to this (‘Why can’t I…?’). It’s an ‘always-on’ generation, but cinema is ‘always-off’. Cinema risks becoming an alienating experience for this generation.”

“Movie industry is based on waiting. Posters for films coming out in July. Trailer for “Star Wars” coming out in December. This generation does not have to wait for anything in any other category. That freshness is something that we have to be relevant for.”

“Finding their own tribes – Each generation goes through this. But for this generation is less about ‘How Do I Fit In’ and more about ‘Who I AM’. That way I can find a community to fit in. I can find other people like me. Movies are a social experience, although you do not talk, but doesn’t account for anything other than physical (you are all in the same room). Yet for this generation they are not just together with people in the same school or even same county. Groups they are segemented or fragmented into are an incredible number of sub-groups like Ukelel and Knitting players. No longer just socceer or piano lessons. This generation is creating the worlds around them, because no other generation has had opportunities to be over stimulated. And they love it. Becky – multitasking helps me focus on the movie. That is her perceived reality.”

“This generation wants to be a big part of  a small change where they can have a small impact. Their photos are instantly liked. Their videos are 6 seconds long. Every kid gets a trophy. Everything is played back to them. It’s about making an instant impact.”

“‘So what?’ Theatre experience has not changed in the last 50 years. Quality has improved, but notion of content housed uniquely here and you walk into my box, which is filled with seats, lights go down, phones go off. Is there an opportunity to think differently how it could be? Adapt. Be smaller / faster/ more adaptable. They don’t have to adapt to you. There isn’t the shared common bond that older people had.”

Furious 7 did not appeal to mass but cleverly segmented a particular market.

“Think more bottom up than top down. They have these lives – how do we become more relevant to them, rather than thinking about how to get them into our box [cinema]. Think about 1-to-1 relationship, what brings their friends together. Not a group but a couple of Becky’s friends.”

“Partner with them – move incrementally towards them. When you get to know this generation, work with them, they will share the experience they want to have. Listen for possibilities. Co-create an experience. It’s good buisness practice. They understand marketing extremely well. Gen Y can smell a rat but this generation can smell its droppings. Don’t text message them. Think beyond Facebook. This generation is moving on to other platforms. Snapchat. Periscope. They will help to show you the way.”

Let them put it together. Minecraft example. There are no instructions. Lego is another one that lets people figure it out. Instructions vs. figuring it our yourself.

“Show them their impact – Twitter is immediate feedback. So many things we can do playing back to them what the experince can be and make the experience bigger in the process. Event itself of movie is only 2 hours but the echo lasts longer. They can be our best marketeers. But there is no incentive to do anything else: I watch the movie and leave. On to her ukulelee lesson.”

“Now what? – This generation can define things in a much more progressive way. We can wait for the Mandys define it for us or we can engage with them.”

[And with that the 1/2 session ended and the challenge has come more into focus, though the solutions are no less clear.]
Follow me
Patrick von Sychowski
Editor at Celluloid Junkie
Patrick was a Senior Analyst at Screen Digest, went on to launch the digital cinema operations of Unique and Deluxe Europe, then digitised Bollywood at Adlabs/RMW, and now writes, consults and appears on panels about cinema all over the world.
Follow me
Latest posts by Patrick von Sychowski (see all)
Send this to a friend