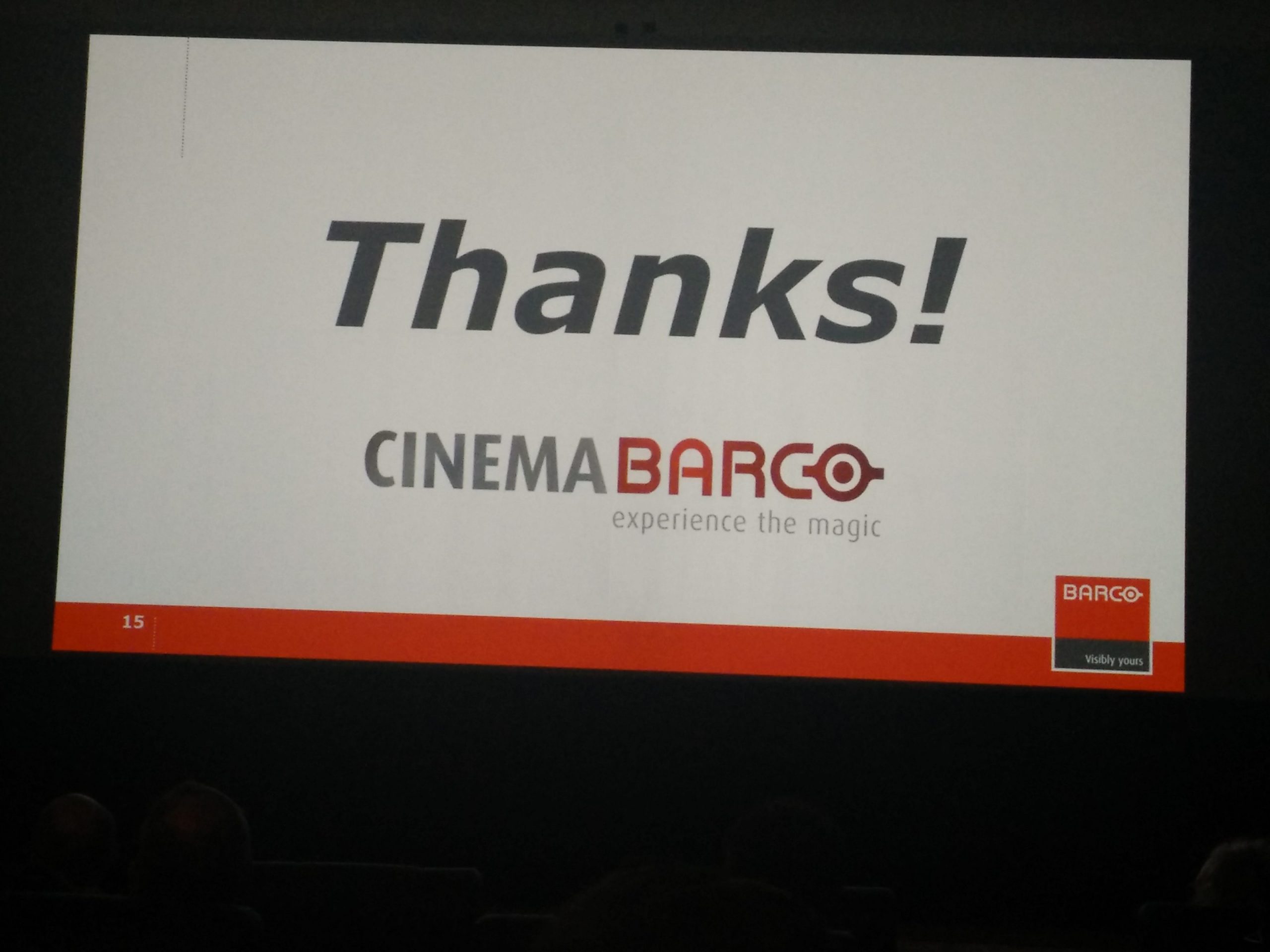 “VPFs are gone and they are not coming back,” was the stark message from Barco’s Todd Hoddick, delivered at Barco’s big CinemaCon press event on Tuesday. While this should not come as a surprise to any cinema industry insider, this message is also one that appears to guide Barco as it steers towards a post-VPF future.

With Cinema Barco having launched at last year’s CinemaCon, a year on the concept is clearly taking shape and coming into focus.

There was lots of news and announcement, including the Barco Escape deals with Jerry Bruckheimer and 20th Century Fox, the announcement about a complete family of laser projectors (including a highly anticipated retrofit), the AuroMax object-based and open immersive audio format, and a job change for Todd himself.

Yet the running theme was the new reality that cinemas find themselves in the period that is taking place between the conversion of the majority of screens to digital in recent years and the VPF schemes running their course in the coming years. We will look at these developments and announcements in turn.

Barco’s Head of Global Cinema Business Todd Hoddick introduced the session with an overview of the many things Barco is working on.

“What is Cinema Barco,” was the question faced last year, Hoddick said. “Technology for the sake of technology is not interesting. What is interesting is what drives people to the cinema. Then technology is doing something special. Brings showmanship back to cinema,” is how Hoddick summarised it. This session would be, “Where we are on delivering some promises.”

The first major annoncement was personal, which is that Hoddick is stepping down from his current position and being replaced by Stijn Henderickx as Barco’s Global Cinema Business.

Instead Hoddick will focus exclusively on Barco Escape, the three-screen system unveiled last year and used for “Maze Runner” since then. “I fell in love with it,” is how he described the format. (More on this later). But before he changed business cards, he kicked off by saying that Auro has come a long way, open standards are being promoted, the Alchemy server is the heart of Barco’s system, there is Lobby Enchantment and Audience Entertainment to be showcased.

But with laser being a major topic at the show and representing a “a major industry shift,” Bram Dieryckx was on hand to talk about the latest additions to Barco’s ‘family’ of laser projectors. Hoddick had already predicted on a panel a day earlier that lasers will come down in price significantly enough in the next nine to 12 months to be competitive with Xenon projectors – albeit not on list price, but on total cost of ownership (TCO), including replacement lamps, electrcity use, maintenance, operating expenses, etc. But still a major development

The new projectors that would complement the ‘Premium’ lasers were the DP4K-30L and DP-4K-22L, that would be available in the 4th quarter of 2015. These would mean that Barco can cover smaller screen sizes in addition to the larger 6P laser projectors that it already ships.

Perhaps even more interesting was the announcement abou the laser retrofit, based on phosphor technology. This lower cost solution to get more brightness out of older projectors would be shipping early next year (2016). “Without any lamp costs and reduced electricity cost,” Dieryckx said, it will “bring laser costs benefits to older projectors.”

Brian Claypool then came on to talk about Barco’s immersive audio format Auro 11.1. With 550 screens installed or committed to-date, 35 post production facilities and over 100 titles released or announced, Auro remains junior to Dolby’s Atmos. Yet the fruits of Barco’s further efforts in this field were also announced.

AuroMax by Barco is effectively Auro 2.0 (as in the second itteration, not stereo without bass). Thids now includes the assets of Iosono that Barco aquired last year. Claypool said that Iosono, “were the first to implement object-based sound.” Barco has now “taken that capability and incorporated that into the technology we licensed from Auro. It will be based on the standardisation effort to have one format,” he continued. The Powerpoint slide also indicated that it was “Less than half the cost” of other objects-based sound systems.

Tom Bert then talked about Barco’s Alchemy server, with which in his words, “we’ve removed the bottleneck” and can do up to live 4K 3D. It is “the engine that will drive our future in cinema,” he concluded.

Jim Molony, the Director of Strategic Partnerships talked about ‘What is Barco doing in the lobby?’ The answere is, “Lots!” It uses Hollywood films such as “Minions”, “Inside Out”, “Mad Max Fury Road”, etc. to build excitement all the way from the lobby to the auditorium.

Then a shift to Interactive Dimension, which is Barco’s effort with Audience Entertainment. On Friday the company had announced the mobile platform connecting to the big screen. Now the platform offers interaction based on motion, sound and mobile. He gave a demonstration for a ssimple but effective voting functionality.

The previous day I had witnessed the TimePlay demonstrations, which seemed very popular, but my phone kept getting kicked off the TimePlay WiFi network and the app had problems reconnecting. The elegance of the iD/Audience Entertainment smartphone solution is that it does not require users to download a dedicated app, but simply to connect to the WiFi network and open their browser. That’s it.

The film we voted for was “SF Noir”, a short clip that showcased the Barco Escape system/screens capabilities beautifully.

Ted Schilowitz, Barco’s CinemaVangelist came up to talk more about Escape. “Maze Runner was really a experiment,” he said, alos calling it “A big risk for Barco. Were we drinking our own kool-aid?” It played in several Cinemark theatres in the US plus two Kinepolis cinemas in Europe. “Audience feedback was absolutely spectacular,” said Hoddick, now back on stage. “Thus I decided to leave my dayjob.”

T&T then talked about the deal with Jerry Bruckheimer, who came to see their demo and was only expected to stay 10-20 minutes, but ended up watching it for over two hours. T&T confirmed that in addition to producing a new film in the format, “he wants to re-envision an older film” as well. No confirmation or speculation which one. (I’m guessing Armageddon. And as an aside, Bruckheimer was one of the first to use the Red camera for his TV show “C.S.I.”, with Schilowitz working for Red back then, so I guess it is a relationship that goes back quite some time.)

Another confirmed film will be NASCAR racing. Todd (or maybe Ted) said that previously it was though that “everything should be in 3D – that was a huge mistake. We use this format when it enhances story telling. We appreciate what this can do for horror films.” Apparently Slash (the former Guns ‘n’ Roses guitarrist) is going to be making “The Hell Within” for Escape, “natively shot” for the format.

The big film/Escape announcement was the multi-year and multi-title deal with 20th Century Fox. “Our friends at Fox were very happy,” Todd (or Ted) confirmed, saying that it “exceeded expectations.” Under the new agreement 20th Century Fox will work on multi-year arrangement (5 years), with multiple titles per year. The first one in 2015 will be “Maze Runner 2” that will open on 18 September in 25 locations (not confirmed which or where).

The same number of sites will play the Escape concert of Lady Gaga and Tony Bennett, which they showed an extended clip from. There is no firm release date for this, though the footage looked promising.  Hoddick concluded that “There’s no where else to experience what you experience here,” meaning in cinemas, but also using Cinema Barco’s suite of solutions.

The laser projectors and upgrades to existing projectors will have an appeal to exhibitors that face the end of the functional life of their first generation instals. “Upgrades” and “replacement” cycles are two concepts that exhibitors are only reluctantly starting to consider for their digitla cinema equipment, perhaps not surprisingly as their previous analogue equipment was good for 30, 40 or even more years. Now they are having to face switching to laser without the benefit of VPF. Whether they like it or not they will have to look at new business and funding models.

So while the end of VPFs means greater flexibility in programming, it also means financial uncertainty. This is the future that Barco is creating a role for itself to stay relevant and innovative in.