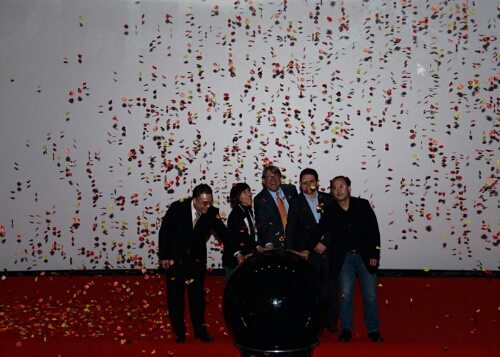 Eying 1958 recently set a new industry benchmark when it installed the world’s largest single 6P laser theatre, the Barco Laser Theater in Chengdu, named after the eponymous Barco DP4K-60L single projector 6P laser 3D system, which is at the heart of the unique landscape-style campus theatre.

Celluloid Junkie: What has been the experience of being one of the first cinemas in the world to install laser projection?

Ms. Peng Jin: It’s by no means fortuitous for Eying 1958 Cinema, owned by Emei Film Group, to be one of the first cinemas in the world to install laser projection. Emei Film Group has been highly concerned about new technologies, and has attached special value to the development of strategic partnership with world-leading industry pioneers.

The construction of the world’s largest single laser premium theatre – Barco Laser theatre of Eying 1958, adopts the new technology and the optimal solution for the first time. The hall uses a 6-Primary (6P) laser-sourced digital film projector DP4K-60L, the first of such products ever made by Barco, one of the world’s digital cinema leaders.

Compared with projectors sourced by xenon light (which usually generate 30,000 lumens singly) widely used in cinemas currently (including DMAX), this projector provides up to 60,000 lumens for projection, offering brighter and more colorful expression for both 2D and 3D films for audience to immerse themselves in more vivid plots.

The high-quality laser light machine enables the creation of unparalleled and revolutionary experience for the audience. 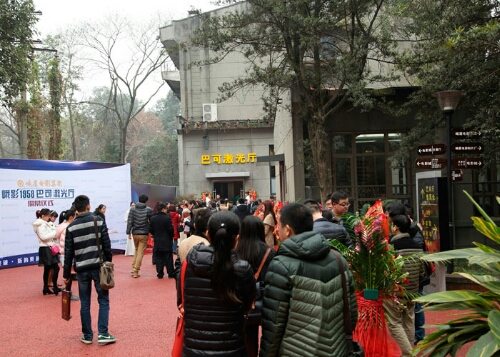 CJ : Can you tell us about how you have worked together with Barco for this and how they supported you?

Ms. Peng Jin: As you have mentioned, while carrying out our laser projector plan, we established close cooperation with Barco.

We both had our own special project team and staff responsible for technologies and promotion to take care of all aspects of the project through effective communication and all-round cooperation. A good example was seen on the launch ceremony for Barco Laser theatre of Eying 1958 on January 26, 2015.

The operation of the laser theatre would never have been achieved, of course, without the support of Barco. First of all, in terms of technology, Barco had frequently assigned specialists to review the blueprint and inspect the theater before installing the projector in order to avoid unnecessary workload and provide professional guidance for the environment, luminance uniformity and seat distribution of the theater.

To install the projector, Barco sent a team of senior engineers from the laser projector R&D team at their head office in Belgium to carry out strict debugging, such as the complex calibration, optical path check, server synchronization, and the superior difficult calibration of 6P laser color, following the latest Hollywood film show conditions and parameters.

With the heavy task to be completed in a short time, Barco’s engineers went all out and finally provided a perfect audio-visual feast for the audience. After the laser theatre was put into operation, the senior engineers kept on with the 24-hour monitoring of equipment with no dead corner to ensure safe operation.

For promotion, Barco invited the co-founder of LIPA (Laser Illuminated Projector Association), the widely admired the Laser Guy–Bill Beck to the laser theatre launch ceremony, where he demonstrated and explained the difference between projectors with the traditional xenon light and those with laser, attracting the attention of many mainstream media.

In addition, with the support of Barco, Eying 1958 Cinema carried out a campaign for selected audience can only pay “5 yuan to watch movie in laser theater”, comparing to normal ticket cost 60 yuan instead. The one-month campaign has attracted more than 5,000 visits, making the laser theatre even better known. 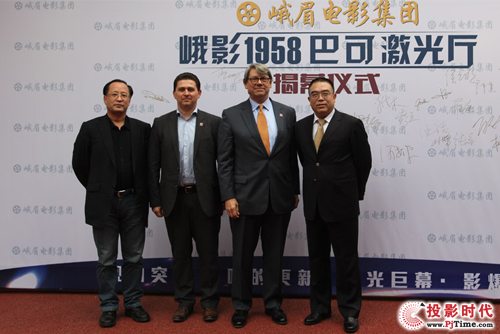 CJ : Do you promote the fact that this screen is laser projection to cinema goers and if so, in what way?

Ms. Peng Jin: The Laser Theatre of Eying 1958 is, and will remain the most competitive star hall of all in Eying 1958 Cinema. The Cinema will spare no effort to introduce the hall to the public. The introduction is mainly divided into the conventional movie screenings and event highlights. For the former one, all the key films have been, and will continue to be screened in the hall ever since it opened to enable more movie fans to experience the revolutionary change brought by laser projection.

What’s more, our star Laser Theatre will not of course miss those big events. The cinema will have various kinds of influential events to be held in the laser hall, such as: Jackie Chan’s fan meeting for “Dragon Blade”, promotions of new films by Chengdu Film Promotion Association, and the preshow of “Wolf Warriors in Chengdu”, and so on. Additionally, as the lavish “Fast and Furious 7” came out as one of the most expected films in 2015, the Cinema carried out some special campaigns in the theater. We invited Sichuan’s top sports car team to watch the film in the hall and cool cars and car models to the cinema. We’ve got the attention of the media and made the laser theatre more visible and famous.

CJ : Do you see laser projection as a consumer differentiator for “1958” and how does it compare to 4K, Imax, Dmax and other cinema technologies?

Ms. Peng Jin: There is no denying the fact that the presence of the laser projector provides a better choice for the differential operation of Eying 1958 Cinema. The laser projector, being the core of upgrading film experience currently, is a typical and sophisticated tool in the industry as it has been integrated with all the new technologies such 3D, IMAX, 4K, HFR, and laser. It provides not only excellent brightness but also luminance uniformity and color expression, which enables the best 3D effect and a giant leap of quality, bringing a perfect 3D experience for the audience.

To our excitement, Barco Laser theatre of Eying 1958, besides its ability of seamless switching between 3D and 2D, doesn’t need any plug-in 3D systems for 3D films, which effectively increases the brightness and provides flawless presentation of films with no speckle effect. Barco’s laser projector keeps the cost down with almost zero consumables. The service life of the laser light source, is more than 30000 hours, but it manages to provide consistent image quality, which projectors using xenon light can’t do.

CJ : What are your future plans for using new technology (laser and more) for making “1958” a top cinema brand in China?

Ms. Peng Jin: With the vigorous development of the Chinese film market as well as the corresponding surge in the number of cinemas, Eying 1958 Cinema must take innovative measures to further consolidate its outstanding position in the competition. And of course, given the immersive viewing experience brought by the laser projector, it’s not impossible that we will build more laser halls in our cinema considering the picture quality and the equipment maintenance. This is the work that is very worthy of being done. 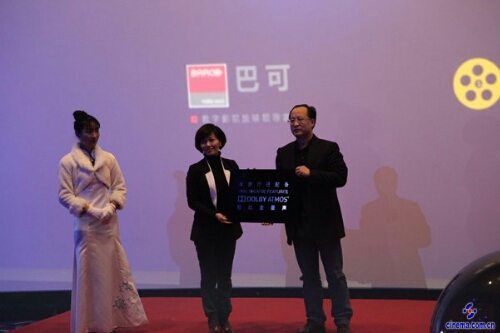