Yesterday we reported how cinema patrons’ bags were searched and a man was attacked with a broken bottle (by women!) in relations to screenings of “Fifty Shades of Grey” in Glasgow. It seems that this was only the start of various antics tied to the S&M romance film across Britain – plus cold showers in Canada and one very red faced woman in Mexico.

It appears that some people (mainly women) attending screenings of “Fifty Shades of Grey” are enjoying it in the style of “The Rocky Horror Picture Show” midnight screenings, according to cinema staff.

Moviegoers turned up wearing full-body latex suits, and one even asked if SEX TOYS were supplied.

Staff have found all sorts of x-rated objects on cinema floors since the movie’s release last week – including used condoms, masks and handcuff packaging.

A group of women were caught in the dark after other audience members made complaints during the movie, which is filled with explicit sex scenes.  LINK

In Northern Ireland alcohol was apparently frequently consumed prior to patrons going to see the film, according to the owner of Movie House Cinemas, Michael McAdam:

“Particularly in the city centre, where people were certainly high-spirited, I think there were people who came along with groups of girls, maybe one or two didn’t really want to be there – there’s nothing more annoying that when you go to the cinema, people are just sitting talking.

“While other people were saying ‘look, hang on a minute, I want to see this I bought my tickets two months ago’, these people just didn’t care and were incredibly rude. Incredibly rude to each other, rude to staff and it just isn’t acceptable.”

The managing director said he was shocked that some cinemagoers refused to leave when asked.

“We were taken a little bit by surprise at the [im]maturity, I mean we’re talking about women in their 40s and 50s who were totally out of order,” he commented.  LINK

Living up to the stereotype as the hard drinkers of Britain, an Odeon cinema in Scotland’s Dundee had to evict an allegedly drunk woman from the premises.

An incident during the first batch of screenings of the blockbuster hit in the City of Discovery saw two would-be movie goers become embroiled in a foyer stand-off at the Odeon.

Odeon confirmed the “disagreement” between the two guests at their multiplex in Douglasfield as temperatures rose ahead of the raunchy film.

It is understood cinema workers had to intervene to calm the feuding pair before the movie started.LINK 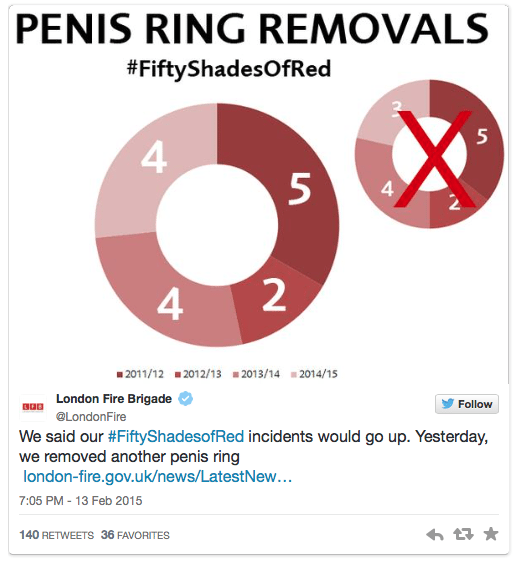 London Fire Brigade is so concerned about what they fear people will get up to related to screenings of the scandal du jour film that they have issued pre-emptive warnings hash-tagged #FiftyShadesofRed.

From a man trapped in a titanium chastity belt to an unfortunate gentleman whose penis had become stuck in plastic bottle, the capital’s fire crew has seen it all.

The campaign was launched in response to fire chiefs’ fears that the new Fifty Shades of Grey film could lead to more people being stuck or trapped in objects like handcuffs or rings.

In 2013/14, firefighters attended 472 incidents involving people being trapped or stuck, often in everyday household items – but this has increased year on year since the raunchy book series was released.  LINK

Meanwhile moviegoers in Canada got a cold shower – literally – watching “Fifty Shades”. And “The SpongeBob Movie” – soak up the irony of that one.

A theatre full of moviegoers had their passions doused when a burst sprinkler shut down a screening of ‘Fifty Shades of Grey’ at an Etobicoke movie complex Monday.

Images sent to CP24 by viewers in attendance showed water dripping through the lights at Cineplex Cinemas Queensway & VIP at The Queensway and Islington Avenue.

“We have experienced a burst water pipe and will not be able to continue the show,” a staff member told patrons at the theatre in an audio clip posted to social media.  LINK