The figures show an overall slight upward trend for the EU as a whole, breaking a long pattern of decline, but only slightly and primarily thanks to strong box office in three major territories. Most west European territories reported a decline.

The Observatory estimates that total admissions in the European Union increased marginally by 0.6% to 911 million tickets sold, around 5.4 million more than in 2013 (906 million). The small increase was primarily ensured by a strong year-on-year performance in France and Spain which kept EU admissions from continuing their downward trend of recent years.

As in 2013, two thirds of EU markets experienced a decline in cinema attendance, while admission levels increased in only nine out of the 27 EU territories for which provisional data were available. The year-on-year increase was most pronounced in France (+14.8 million, +7.7%) and Spain (+10.5 million, +13.6%) with cinema attendance in both markets recovering from exceptionally weak results in 2013.

Although both UNIC and EAO figures are provisional, they come to similar conclusions, positing a 0.7% and 0.6% increase respectively for EU countries. UNIC sources its data from UNIC members while EAO data has been “collected with the collaboration of the EFARN (European Film Agency Research Network)” mostly from national film institutes and public audiovisual bodies.

UNIC represents exhibitors and trade bodies in 36 territories, but only published provisional data for 24. It did not yet have data for Belgium, Bulgaria, Cyprus, Greece, Hungary, Iceland, Malta (EAO also not), Montenegro, Macedonia, Romania or Slovenia, for which EAO has provisional data. Neither UNIC nor EAO covers Serbia, Bosnia, Belarus, Ukraine or Moldova. The omission of several Central and Eastern European territories from the UNIC figures misses out on some of the larger growth markets, as noted by EAO:

There were also some minor discrepancies between UNIC and EAO data for some contries reported by both, notably Germany, though this had to do with FFA only releasing its data on 9 February. For Sweden, for example, UNIC has +0.8% growth in BO but -1.7% decline in admissions, whereas EAO has +0.5% BO and -1.9% admissions. There is also a larger discrepancy when it comes to Russia’s BO and admissions, which UNIC sees as stronger than EOA does.

Given the BO drop in its North American home market, it should also not come as a surprise that Hollywood films’ box office share declined in Europe in 2014.

US market share on the other hand declined in 12 out of the 14 EU markets for which provisional data were available with the average US market share in these markets dropping from 70% to 63%.

This is likely to change in 2015, with a stronger slate of Hollywood films.

The EAO will publish more definitive figures in early May, prior to or during the Cannes Film Festival, though the figures are unlikely to change by much.

It would be interesting to know if event cinema (alternative content) is included in the box office tally and what proportion it represents in individual territories and across the region. It may be that strong showings of operas in cinemas in UK and Sweden may be masking a more significant decline in cinema film admissions and attendance than apparent. 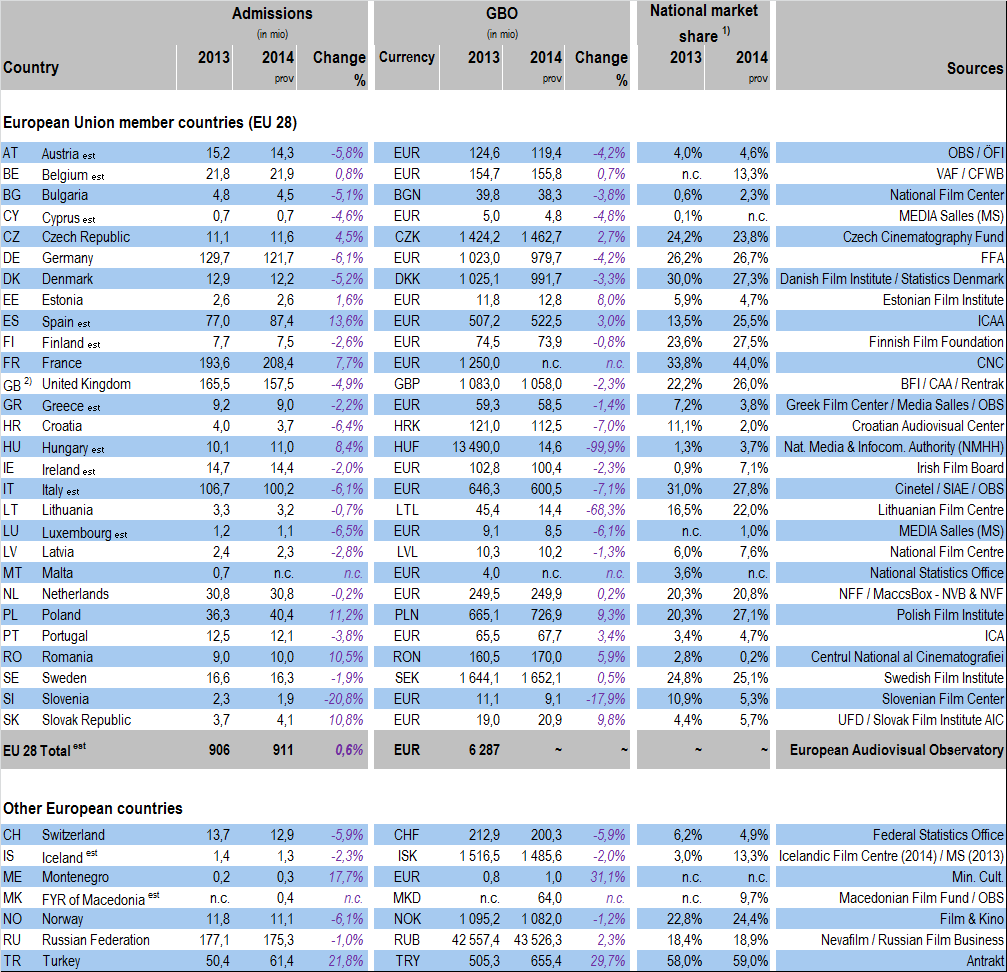