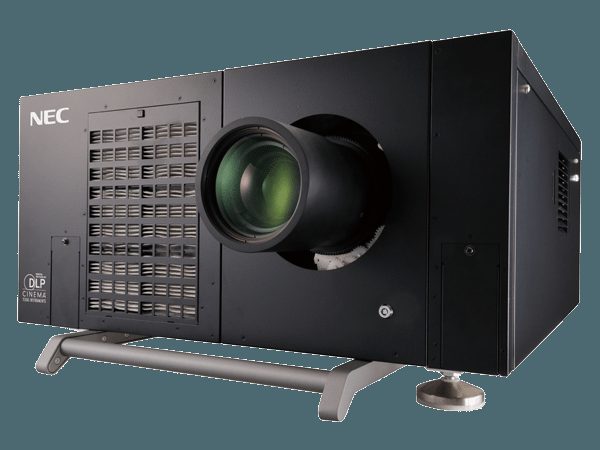 This year (2015) is definitively the year the world became completely digital as Sundance Film Festival announced that not one film shown was on celluloid-film. Most of the major markets are now completely digital. If you listen carefully, you can hear tens of thousands of cinema owners letting out a sigh of relief as they think now that the transition is over they can forget about it for the foreseeable future. Unfortunately this is not the case.

The use of lasers as a light source has been an interesting topic for many years. It has taken a change in government restrictions/regulations to put a rocket under laser, and it is literally taking off. We now have Barco and Christie with LPF (Large Premium Format) offerings. But more importantly, it is the NEC BPP (Blue Pump Phosphor) that is of most interest.

Recently Bill Beck, now at Barco, did a detailed techical presentation of Laser for SMPTE. After watching this presentation and a number of follow up Emails, it became clear to me that BPP-based laser projectors would flood that market in 2015.

NEC has shown BPP-Laser works well with small screen solutions.  This year we will see the next generation of BPP-Laser projectors based on more effective Blue Lasers allowing BPP-Laser based projectors to replace small, medium and potentially large cinema projectors. It was also made very clear that Xenon, at current prices, would quickly be overtaken by laser, making Xenon solutions obsolete.

This leads to a realisation of another equipment transition. If projector vendors stop making Xenon projectors, this would eventually lead to Xenon lamps no longer being manufactured, and we are back to a similar situation to film.

Fortunately it is unlikely to be as quick a transition as film, because making lamps is likely still relevant for other industries. A more gradual run down of the lamps supplies is more likely, however it will eventually end as manufacturers see no new Xenon projectors being sold.

This does bring up other historical issues with those keeping film projectors around for historical or archival purposes. If suitable lamps are no longer available for them, more creative solutions for their light sources may need to be created.

The big question out of all this is “How Long Do We Have”. That’s a difficult question and is unlikely to be easily answered until the end of the year when the next generation of Laser projectors is upon us, but 10 years or less would be a reasonable estimate (ten years being the industry standard for projector equipment life span).

Where laser needs to improve

Laser is a very young technology for use in projection light sources. Currently we have the larger 3&6 Primary lasers made by Barco, Christie, NEC. These are typically very large due to the active cooling requirements. Active cooling being some form or cooling system above that possible by typical fan and air flow. (ie. refrigeration system as an example)

Heat is the problem with laser as it has a large effect on its lifespan, and it is lifespan that makes Laser so appealing, making it a critical issue. BPP-laser is a compromise between these two issues. Its life span is considerably shorter, but its also much cheaper to build and run as it can work on inductive cooling, unlike the primary laser solutions.

The key point here is that we have a long way to go with improving the efficiency of the lasers in this type of use. Each primary laser – Red, Blue and Green – use different methods in their implementation. Blue is the least efficient and has a lot of room to improve.

This will only improve BPP-laser, but ideally, we will hit primary based solutions at some point, hopefully without the need for active cooling. Active cooling is likely to keep primary laser to the PLF (premium large format) based screen for the time being.

Primary Laser is the eventual goal

It is well known that the primary laser solutions can be very bright. They can also be amazingly effective for 3D by using 6 primaries and wavelength multiplex visualization. One eye sees primaries R1G1B1 and the other eye R2G2B2 using dichroic filters. This is similar to the typical Blue and Red 3D glasses of old, but on a very refined level filtering out colours that are very close to the primaries (RGB). Ultimately the use of primary lasers is the goal as High Dynamic Range (HDR) images are the goal – and it is the primary laser technology that will be the most efficient in achieving this. The use of Xenon or BPP-Laser would require filtering out a very large portion of the photonic energy to archive the colour purity needed to archive colour spaces such as BT.2020.

Going Laser is not the end

After laser projection, the next big transition will be that of supporting next generation colour spaces. In simple terms, better and more true to life reproduction of color. ie better quality pixels rather than more of them. The new colour space the industry is aiming for is called BT.2020. Currenty a lot of work is going on in that area. Display vendors are not exactly sure how close they can get to this lofty goal, but 3 or 6 Primary based Laser solutions is one of the technologies more likely to archive this.

Following up from this article, in my next, I want to look into the aftermath of the initial conversion to digital. The feast is over and now the famine begins for the sales in cinema technology equipment. This will lead to amalgamation. Who will rise to the top, and who will fade away into history.

James Gardiner is a cinema industry professional and founder of CineTechGeek