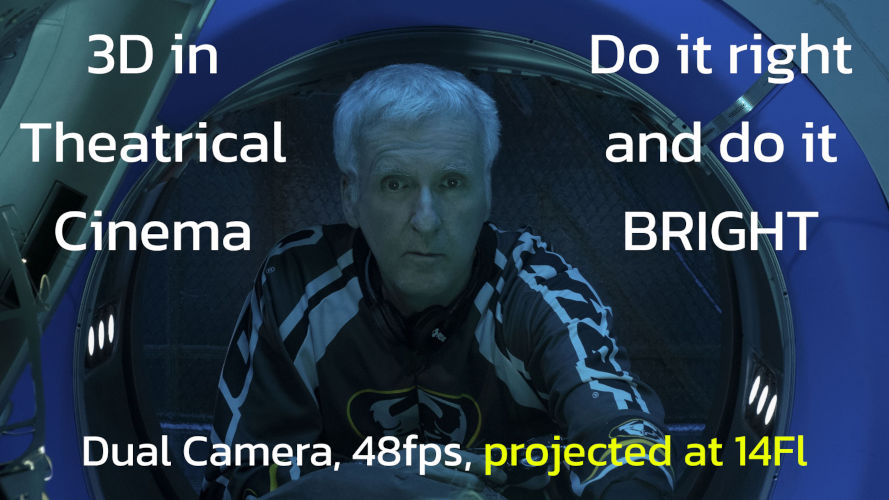 Cinema exhibition is now in an era of change. As when TV or VHS came into existence, consumer behaviour has been affected. With the advent of living with COVID and the studio direct-to-consumer streaming era, we are in the middle of a new re-alignment in terms of attendance levels. Never has it been more critical to offer exclusive premium experiences that cannot be easily reproduced in the home.

“Avatar: The Way of Water”, has shown us, yet again, that 3D done right, is a compelling experience that consumers are willing to leave their homes for.

In this SCO newsletter, we will take a look at the metrics of “Avatar: The Way of Water”, and how we can potentially leverage this in the future to become more competitive for consumers’ attention and attendance.

Where did Avatar: The Way of Water shine?

Looking at Numero stats, we can see that with “Avatar: The Way of Water”, over 52% of consumers saw the film in 3D. This percentage has grown from around 48-49% on opening week. Considering 3D was not in many locations, this shows a strong awareness of 3D and consumers seeking it out.

Now we are in the 4th week, and based on my own small cinemas, the experience is that the 3D sessions are holding better than 2D.

Although not detailed information, it has been well circulated that high-brightness 3D experiences have the strongest bookings. (specifically IMAX)

The conclusion we can take away from this data is that consumers are strongly attracted to bright 3D done right.

This leads us to the question. Can cinema exhibition make 3D a compelling option again? Especially if we can now do it right and bright?

The original “Avatar” film was an ignition point in the transition from film to digital. Many independent cinema owners were very reluctant to install a digital system until “Avatar” and the new 3D systems were on the horizon. Once experienced with digital, exhibitors become much more amicable to going fully digital as we are today.

In the initial 3D days, even with the new digital cinema equipment, doing 3D well was beyond difficult, with extremely dim 3.5Fl (Foot lamberts) being the norm. This resulted in special low and high-brightness versions of 3D films being required. This is because, at such low light, our eyes are not as effective at picking up colour, and to obtain the best result, new colour-timing/grades were produced for lower light levels. For “Avatar: The Way of Water” and with far more powerful projection systems now available due to laser projection, 3 versions of 3D were available: 4Fl ,6Fl and 14Fl.

Unfortunately, with the poorly maintained 3.5Fl 3D solutions dominant in the industry, and most 3D films after the original “Avatar” being “faux 3D”, ie. 2D films converted to 3D by cutting the image up into layers and applying artificial 3D effects on objects resulting in an uncomfortable uncanny-valley (looks not quite right) effect, 3D has largely been abandoned by the consumer and in effect the exhibitors have stopped showing 3D as no one was buying tickets.

3D Rebirth with Avatar: The Way of Water

It has taken the Juggernaut of James Cameron and his sequel for “Avatar”, to wake the industry up again and take 3D seriously. Many cinema operators did dust off the old 3D equipment and push it back in front of their projector, but fewer than hoped by Disney and James Cameron, went to the expense of upgrading the equipment to high-brightness/High Frame Rate 3D.

The problem with an older Xenon lamp-based 3D system is that the lamp has a short range of power ability, typically 80-100% power, while a laser projector can typically go from 30-100% power. Due to this, Xenon-based projectors could only do 14Fl-2D, the predominant format shown in a cinema, and when turning it up from 80 to 100% only a 3.5Fl 3D result was possible, unless the lamp was changed between 2D and 3D shows (not a viable path). With lasers and a 2D show rating at just over 30% power, the cinema has the ability to turn the light up from 30 to 100% (3 times the power), giving the projector the ability to obtain 14Fl on 2D and 3D presentations.

Unfortunately, there is more to it than just turning up the light output to make bright 3D possible. Many different 3D technologies are also in the equation. These include:

Even considering these headwinds, now we have

With all these advances in technology, 3D may have yet another resurgence.

Avatar 3 and more to come

Considering this, and with “Avatar” 3 and 4 likely now coming to cinema in the coming years, I would encourage those in the position to consider investing in 3D in the form of replacing projectors with units suitable to produce 2D and 3D at 14Fl. This is an especially opportune time and many cinemas are reaching end-of-life on current projection equipment in the next few years and will need to re-purchase current projection technology.

If nothing else, with 3D being abandoned by home consumer electronic manufacturers, we are in a position to build a major differentiation between Cinema and home (distributor direct streaming) experiences. This dynamic also makes longer windows more relevant as going back to windows with more differentiation makes it more likely the distributors can get more money out of the consumer.

I recommend cinema owners discuss this with their preferred integrator. There is no hurry, “Avatar 3” is likely a while away, and if you like, you can give SCO a call to discuss the paths you are being pushed towards. As always, the SCO mantra is, an informed decision is a good decision. SCO has no skin in the game but for cinema as a culture to thrive