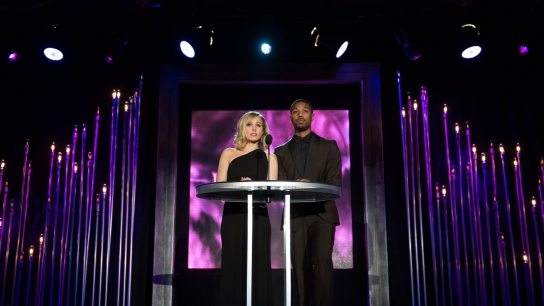 Last year the Motion Picture Academy’s Science and Technology branch effectively closed the book on film as a distribution medium for motion pictures by awarding the Academy Award of Merit (Oscar Statuette) to every single film processing lab in the world. So it is perhaps fitting and symmetrical that this year’s recognition would go to the technology that replaced it, i.e., digital cinema, or more specifically Texas Instruments’s team of engineers (and one from Dolby, more on which later).

The Academy of Motion Picture Arts and Sciences or AMPAS (to give the Oscar Academy, or just ‘the Academy’ its full name) is staying true to the latter part of its name (‘Science’) by each year recognising those people behind the scenes that have contributed to the advancement of motion picture technology, and thus storytelling, by handing out the Scientific and Technical Awards at a ceremony prior to the red carpet Oscars. As AMPAS puts it:

The Academy’s Scientific and Technical Awards honor the men, women and companies whose discoveries and innovations have contributed in significant and lasting ways to motion pictures. Honorees are celebrated at a formal dinner held two weeks prior to the Oscar ceremony. The Sci-Tech Awards presentation has become a highlight of the Academy Awards season.

It is important to remember that these are not awarded to companies but to people, though individuals given the awards have often made their achievements working for companies that have often also given the name to the technology being recognised. While it honors the technologies, it is the people behind them that are being feted.

There are furthermore three levels of recognition: the Technical Achievement Awards (which entails an Academy Certificate), the Scientific and Engineering Awards (gets you an Academy Plaque), the Academy Award of Commendation (Special Plaque), and finally the Award of Merit (an actual Oscar statuette). What is remarkable is that this year Texas Instruments was selected in not one but all three of the main categories, putting a big AMPAS seal of approval on the digital cinema technology that has defined the cinema business.

These awards are spread widely, just like the red carper Oscars, with 21 winners this year. In recent years they have leaned towards computer-based technologies in the field of visual effects and post-production processing and this year is no exception, with winners including people behind such innovations as the ILM Shape Sculpting, MOVA Facial Performance Capture, and Barbershop hair grooming system at Weta Digital (yes, that’s an Academy Certificate for virtual hair stylists from New Zealand).

But by far the biggest winner this year, in a way that is almost unprecedented for the AMPAS Sci-Tech Awards, is Texas Instruments, or rather the people behind the DLP (digital light processor) that is at the heart of the digital projectors that enabled the switch from analog to digital cinema. Their names and commendations in full are as follows:

By way of comparison, the ‘runner-up’ in the total tally, ILM, won two Technical Achievement Awards, while Dreamworks and WETA won one each (the latter for that snazzy digital hairstyling). This is a major recognition for digital cinema, DLP, Texas Instruments and its engineers, though it is important to put it in its proper context.

DLP Cinema is not the only digital cinema projection technology, but it was the first and most significant one. Yes, Sony also has LCOS (and first with 4K) and before that there was JVC’s D-ILA. But it was DLP that kickstarted the digital cinema revolution with the screenings of “Star Wars: Episode I – the Phantom Menace” in May 1999. Moreover TI spent tens of millions of dollars to further develop the technology over the next decade, before mass conversion started to take place from 2009 onwards.

Secondly, projection is not the only engineering achievement that was required to enable digital cinema. Major advancements in the fields of encoding (specifically JPEG2000) and encryption were also instrumental. But if it had not been for a projection technology that could match and surpass 35mm film as a distribution medium (whatever Tarantino and Nolan may claim), then these other technological advances would have counted for nothing.

Thirdly, while important and rightly recognised, these were of course not the only people inside and outside TI responsible for making DLP Cinema a success. I do not know the precise inside workings of TI, though I have talked to many people involved in the early developments of the DLP technology. Some of the ones in TI who were passed over for recognition, perhaps because their roles were not strictly engineer-focused, are Doug Darrow and Paul Breedlove.

Outside of TI, but very much working with them, there were many more. At ETC there was Matt Cowan and Loren Nielsen, who shepherded TI through the minefields of Hollywood studio politics. There was Garrett Smith at Paramount and at Disney Bob Lambert and Phil Barlow (though Phil would be the first to tell me off for not giving recognition to others in Disney), as well as Dave Schnuelle at Lucasfilm. And finally there is Brian Critchley, who, though working for Rank-Brimar (and later Digital Projection Inc.) and not TI, was key in the advancement and implementation of DLP as a cinema projection technology. If the AMPAS T&S Awards had a Best Supporting Player category, these and many others would deserve that award for their part in bringing the DLP technology to the big screen.

The key to TI’s success is made clear in the first part of the second explanation for the awards, “Working in conjunction with the film industry.” Because the company best known for calculators, Speak-n-Spell and smartphone chips did not make DLP Cinema the global replacement for 35mm by toiling away in solitude in its R&D labs in Plano, TX. They did it by engaging with Hollywood over and over and over again. TI’s engineers showed what they had developed, took onboard the feedback (often harsh), went back, tinkered some more and returned for more guidance. This process of iteration is almost taken for granted in hindsight but it was the meeting of two completely separate cultures (microcircuit engineers with pocket protectors meet Hollywood executives with Porsches) that could have ended in disaster.

It is to the Academy’s credit that it is honoring the achievements of TI and its staff, not just as a technology, but as a collective and Herculean effort. And the Oscar statuette to Dr Larry Hornbeck (above) is completely deserved because he alone deserves the most credit. Without him, no DMD, no DLP, no DLP Cinema and while digital cinema could conceivably happened without him, it is likely to have taken much longer and may have been a less perfect technology. Incidentally, 1997 was the year that AMPAS chose projectors using DLP (NB: pre-DLP Cinema) to project the Academy Awards.

And as so often in cinema, image takes precedent over audio despite the latter being half the experience, but we should remember that the other AMPAS T&S Award Oscar statuette was given out to a man who has done more than most in enhancing the audio experience in cinema:

GORDON E. SAWYER AWARD (OSCAR STATUETTE)
David W. Gray
Given to an individual in the motion picture industry whose technological contributions have brought credit to the industry.

As Variety’s David S. Cohen observed, “The Sawyer Award is not given every year, but this year the Acad singled out sound expert David W. Gray, currently VP of global services and industry relations at Dolby Labs.” Gray has been instrumental in several audio developments, including the latest Dolby Atmos.

So with the same perfect symmetry that balanced 35mm film labs last year with digital cinema DLP technology this year, 2015 also saw a balance of recognition for picture and audio. Congratulations to all of you.