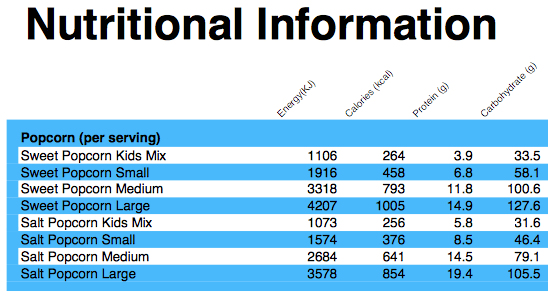 When you go to see “Star Wars VII: the Force Awakens” at a Regal Cinema next year you will have the choice of watching it with a 960 calorie large tub of popcorn (with optional 260 calories “buttery” topping), a 500 calories 54 ounces soda, a 650 calories hot dog or perhaps a 716 calories nachos with cheese. Or if you prefer Marcus Theatres’ Big Screen Bistro, perhaps a glass of Sycamore Lane Chardonnay at 123 calories with a 12″ Pepperoni Special pizza at 215 calories per slice or 1,720 for the whole pizza.

That is because from 1 December 2015 all US grocery and convenience stores, fast food restaurants, amusement parks and, yes, cinemas with 20 or more locations will be required to display calorie information next to each item on their menu. This is the result of a U.S. Food and Drug Administration rule linked to the Affordable Care Act, also known as ‘Obamacare’.

Here is what the FDA News Release had to say on the issue:

The menu labeling final rule applies to restaurants and similar retail food establishments if they are part of a chain of 20 or more locations, doing business under the same name and offering for sale substantially the same menu items. Covered food establishments will be required to clearly and conspicuously display calorie information for standard items on menus and menu boards, next to the name or price of the item. Seasonal menu items offered for sale as temporary menu items, daily specials and condiments for general use typically available on a counter or table are exempt from the labeling requirements.

Vending machines have an additional year to comply with these requirements. But are cinemas ready for this?

According to this article in Omaha.com some cinemas are only now starting to grapple with this challenge ahead.

Many business representatives interviewed say they still don’t fully understand the requirements or potential costs of the rule, which was finalized this month.

Officials at Milwaukee, Wisconsin-based Marcus Theaters, which in seven states has 55 locations, including eight Nebraska theaters, are only beginning to pore over the 395-page regulation, said spokeswoman Mari Randa.

With less than 12 months to go and a busy cinema year ahead, it is high time for cinemas to get organised in partnership with their concessions food vendors as well as their trade bodies NAC and NATO (more from the former later).

The change will not be cheap with several hundred dollars for testing/measuring the calorie content of each food item, changing signboards and menus (though electronic signboards in cinemas make this easier) and training staff all ads up to not-insignificant costs. Not least as many cinemas are now offering expanded in-theatre dining options.

Fortunately the example from UK shows that it can be done. While exhibitors are exempt from having to display the calorie count on the menu boards (unlike fast food restaurants like Pret a Manger), the full breakdown of the calorie content of all menu items are available on the websites of the likes of Vue, Cineworld and Odeon, such as this one from Odeon.

Some US cinemas are, however, getting out ahead on the issue, such as this one interviewed in the above article.

Bill Barstow owns eight theaters, including Aksarben Cinema, through Main Street Theaters. Even though he’s exempt from complying with the law, he said he’s considering complying with it anyway.

“I’ve often said you’re not eating a meal out of a movie theater concession stand, but stuff like that is important to some customers,” Barstow said. He plans to get the information from his food vendors.

We reached out to both NATO and NAC to get their take on the issue.

NATO is, perhaps understandably, preoccupied with the fall-out from the Sony-The Interview-North Korea crisis, but Dan Borschke, Executive Director of the National Association of Concessionaires (NAC) kindly took time to reply to a few questions via email.

Below you can read the replies in full. Expect to hear much more on this issue in 2015

CJ:  What is the NAC’s view of the requirement for mandatory calories display in cinemas and other food retail establishments as of 1 Dec. 2015?

NAC:  It is unfortunate that the FDA has determined that Theatres should be included in mandatory calorie posting and nutrition analysis of the food and beverages purchased. Despite the development of in-theatre dining, theatres are still entertainment venues first and foremost and certainly do not take up anywhere nears 50% of the allocated space of cinemas for food and beverages.

NAC will continue to work with regulators regarding these new rules but we also see our role as assisting our members to comply with mandates that will be upon them in less than a year.

NAC:  Thankfully many of the single serve items such as candy are already labeled due to the 1990 NLEA (Nutrition Labeling and Education Act) but the concern is for in-house prepared items or non-traditional concession items which will need to be analyzed by the supplier or in the case of a Proprietary Item by the individual theatre owner via a certified food lab.. Though nothing is firmed up I have seen pricing at labs that can exceed $1,000 an item.

Of course software, hardware and consulting will all need to be considered in the budget for 2015 because the Menu Boards will need to be updated. And past experiences have shown us that money is not just a consideration but also time – December 1, 2015 is not that far off.

CJ: Is there awareness amongst exhibitors for this requirement?

NAC: NAC has hit the floor running – we have already sent 2 full member announcements and have even created a logo for the program that we will conduct to assist our members in this venture. However, as we all know, there are early-adopters and those who wait until the last minute and we will be there for both.

We have already scheduled sessions on this topic for CinemaCon in April and at the NAC Concession & Hospitality EXPO scheduled for July. Those sessions will include a dietitian, an attorney, a digital board company representative with one of their clients as well as a concessionaire or two and a supplier.

CJ:  Is there a role for the NAC to play in raising awareness and assisting cinemas in implementing this policy?

NAC:  All industries need be made aware of changes within their realm. Most very large circuits have been on top of this concern since the ACA (Affordable Care Act) in 2011 proposed restaurants post calorie counts on their menus and menu boards. Our concern is for the mid-sized companies that don’t have the manpower to make these changes happen in mid-stream – especially since the 2015 budgets have probably already been firmed up. NAC pledges to work with our membership to make these changes as palatable as possible.

CJ:  Do you expect this policy, once implemented, to have an impact on cinema patrons’ concession purchasing behaviour?

NAC:  We are only aware of just one US-based cinema company that has voluntarily posted calorie counts on their digital menu boards just as McDonald’s has voluntarily posted calories at their numerous outlets. By all accounts the impact has been minimal at best. Matter of fact I would advocate that some of the products will have an upswing in consumption when consumers determine that those calories “aren’t as high as I thought they were.”

A recent Johns Hopkin University poll found that only 30% of all consumers admit to reading nutrition labels on packages. Of course we all know that what people say and what people do are two different things and that figure is probably in reality even less. There are case studies of food operators who started selling higher calorie items so that their usual items look better in comparison.

Whether such a situation at the concession stand occurs in the future is open to conjecture but I wouldn’t be surprised that to see a full panoramic view of products at the concession stand so that consumers will have the opportunity to purchase what they desire. Cinemas are not a philanthropic agency – we sell what people want and if there is a demand for a certain food or beverage – we will make sure it is there for their purchase.