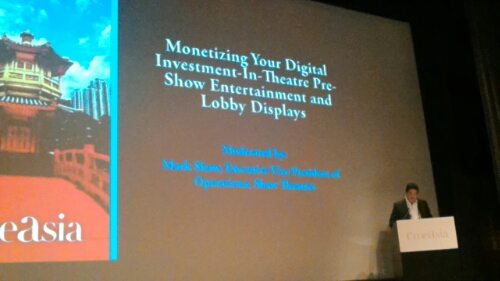 Cinemas have been digitized, but for new cinemas that were not covered by VPF there is still a need to make money off digital and the pre-show. That was the topic of the second session of the second day of CineAsia, introdiced by Mark Shaw from Shaw Theatres. The talks were short and because the previous Christie session over-ran, everyone on stage talked extra fast.

Todd Hoddick, VP Global Entertainment Barco –  “You are going to see a lot of great ideas today,” he promised. “All about the ideas you see there are two things – we must improve the audience’s experience, give them an adventure and romance, something they can’t get at home. Secondly, drive revenue. These things will not be driven by VPF. With that, lets start the presentation,”  Todd announces.

Current state of digitization – mostly converted. Flashes up digitisation by continent (Latin America still lagging). “Most of our customers look for ONE partner they can trust. We are happy to partner with out friends GDC, Doremi and Audience Entertainment. Bring a full solution so you can have a choice of partners.”

“In mature markets we see very flat growth, maybe at most one per cent. Whereas in China we see tremendous growth. 14 screens per day in China,” Todd points out are opening. 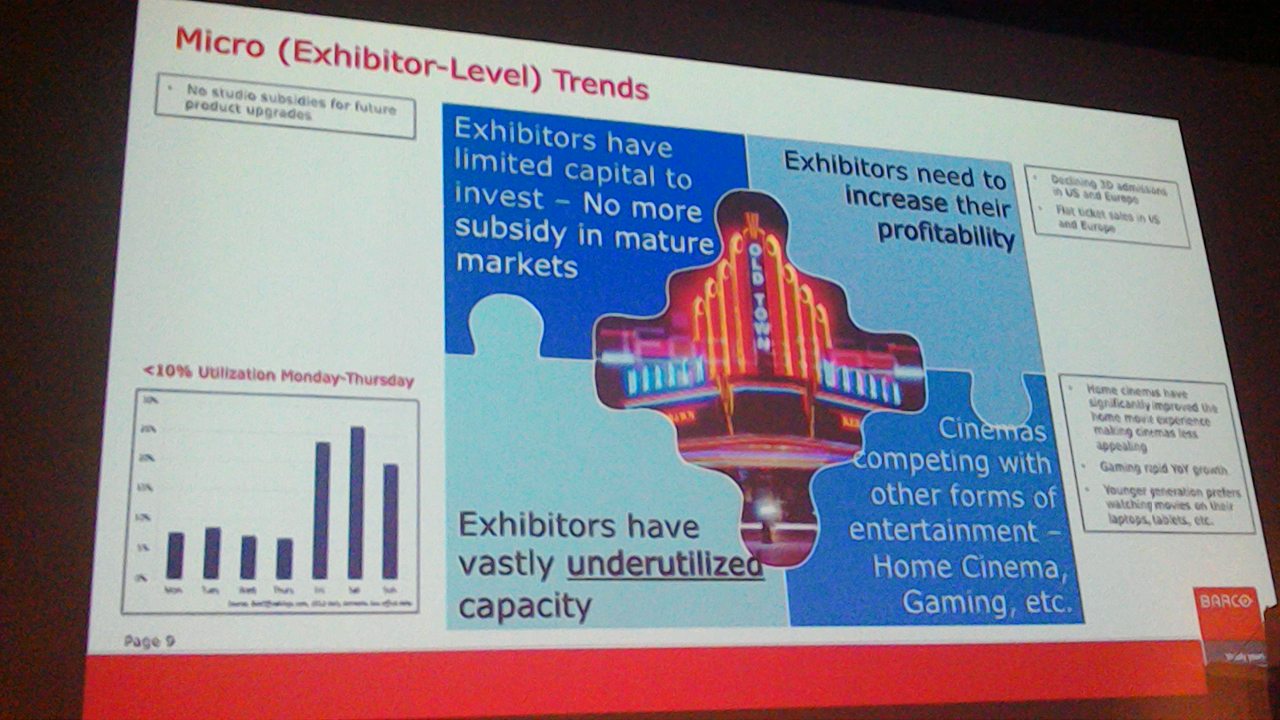 Micro-trends: “No more VPF happening; exhibitors have under-utilized places – competing with the likes of Netflix we need to differentiate. These products have to be profitable. They will not be subsidized by anyone else,” Todd re-itterates, in case there is anyone who still believes in Santa Clause the Easter Bunny the Tooth Fairy Second Round VPFs.

Todd then casts his mind back to his Disney experience, when  people asked why they did not have more rides on Main Street? “Because you need time to acclimatize. It needs to be special. Technology should fade into background and support those stories.” (Plays ‘Cinema Barco: Experience the Magic’ clip)

Which leads to the (truncated) point 2. Cinema Barco – Our conrnerstone

“Thank you for making Barco the global number one digital cinema company and number one in China. We are listening,” was his final point.

The last point (which got covered) was: 3. Improving Movie-Going Eperience to Improve Exhibitor’s Bottom Line 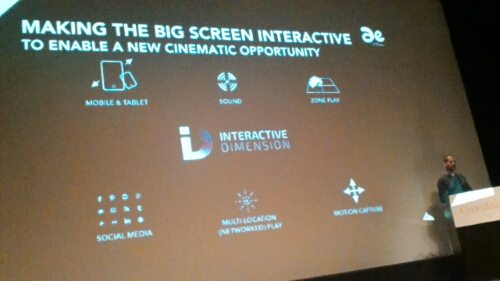 “I will tell you a small story before we start. Eight years ago I spoke on stage in Beijing about the future of 3D. The Culture Minister with me on stage saw the vision and next three years there was big uptake of 3D in China. That is the way I feel right now,” is how Ami opens his presentation.

(Makes everybody stand up.) “We have tiny camera in the theatre. We know when you talk to a friend, we know when you take out your phone. We know everything. I have three kids, they all have mobile phones. They want to ouch the screne. That is what AE allows.” [He says this wihout making it sound too much like 1984] Ami also agrees with Todd that it needs to make money.

“The Barco logo is there for a good reason: they are a major shareholder,” Ami aknowledges.

Talks about the difference between passive and active interactivity. “The former is syncing your mobile phone to the big screen. But active interactivity allows us to control what is happening on the big screen.” He stresses that AE has been around for a long time in concerts and Time Square. “But now that cinemas are digital it opens up opportunities.” He then states “You will remember the one presentation that made you stand up and sit down. That is why advertisers are prepared to pay four times more. Go to advertisers and show them what is possible now. If they want results, point them to our website. There is all the data there.” More tomorrow (Thursday) morning is promised. 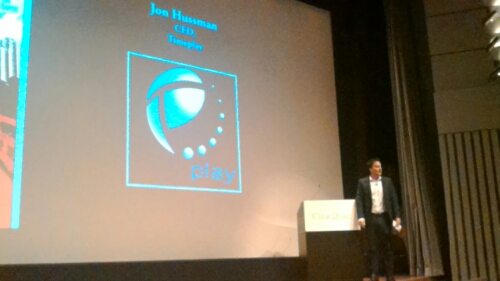 “We don’t have a lot of time, so I will try to do it quickly. I agree with Todd and Ami that this is about bringing new innovation to cinema. Imgine how engaged your audiences will be if they could interct with the big screen. Everyone has a mobile phone so that is what we are focused on,” is how Jon opens his presentation.

TimePlay currently operates in over 700 cinma screens before every movie, he shares.

“There are 1.76bn martphones world wide; 66% mobile phones in China are smartphones. – it is all about mobile. It is becoming part of the fabric of everyday life. We turn your phone into a controller.” He says theirs is the only system where the audience controls what is on the screen.

“We can leverage the billions of dollars of investment by EA and others.”

Results: “Consumers love it. We have a cult following. People perceive it as entertainment. Partners selling for 100-200% more than linear [adverts]. 6 million downloads per 1,000 screens. 52% voluntary email sign up rate,” are some of the stats that Jon shares.

This puts consumerdata in the hands of exhibitors and advertisers, he observes. Skinnable template. Engagement, amplification, dpath to purchase – it’s what it is all about.

Trailers: “we’ve done a bunch of stuff with studios.” “Star Trek: Into Darkness” flashes up on a poster.

Interactive dedicated content. “We built it so that we could support 90 minutes of Halo [the video game]. We are working with big studios, whether people buiding Angry Birds or Halo. There is a whole new business being created. We are making it open and available for people who have invested billions of dollars in (games) platforms.”

Using it for business meetings is another potential this has – Microsoft is already the first client. Paying between $5,000 and $10,000 per event.Movie goers, exhibitors, audience and advertisers.

TimePlay has spent $50 million dollars on developing this technology. “We have an extremely valuable patent portfolio.”

“This is the next big thing in digital cinema – interactive cinema. This will let you engage, entretain, inform and earn. Demo at 5:15pm,” Jon concludes. 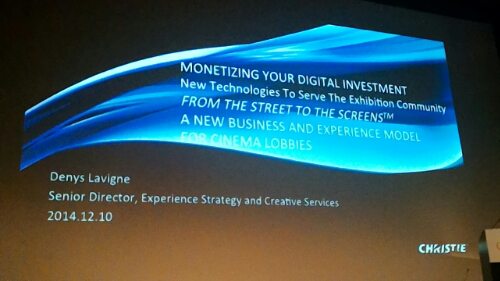 “The lobby has historically not been used to its greatest potential. We are now at a point when the lobby needs more love. We are doing a lot of things at Christie to fascilitate that,” is Dennis’ opening statement.

Dennis founded the experiential digital signage company that was acquired by Christie last year. Had colaborated with Christie a lot over past 5-6 years. Experiental is happening in a lot of environemnts – stadiums and airports – but not cinema. The agencies are looking for new channels to showcase their brands and connect with audiences. Guzzo Cinemas in Montreal, Dolby Theatre Barcelona. Moscow Cinema [I missed the name].

Christie Experiential Network – Introduced in North America in Oct 2014. 1st location opening in Detroit in two weeks. Dec 18. Christie invests in the technology. “Business model is revenue share. Christie will sell advertising through its own agency to brands, agencies and studios. Expansion into Asia in the coming months,” Dennis promises.

New layer in the Christie business offering. (Plays intoduction ‘From the Street to the Screens’).

“Our approach to the lobby is not just one techonlogy – it is about multiple layers of engagement. The aim is to bring more value to the cinema destination:”
New Experience, new ad revenue
Longer stay, higher spend
Moe loyalty, have people come more often.

“Cinema lobby is a strategc space that has been underutilized. Christie wants to facilitate the integration of next-generation digital experience.”

And with that this session ends.