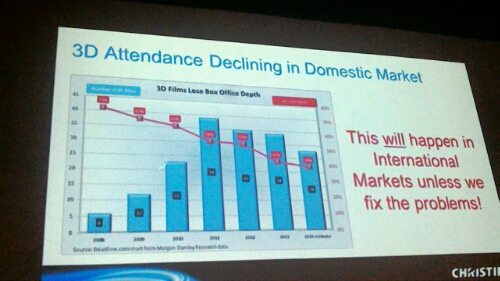 Early morning talk and demo of Christie’s 6P laser light illuminated projector. Most of this is a repetition of what was said at IBC’s Christie 6P laser demo in September. First topic is ‘Market need’. Given that lasers are not cheap, why do exhibitors need them, particularly when many of them have just gone through the expensive upgrade from 35mm?

“Not because it is cool or because Bill Beck [Barco] is building 6P laser projectors. Butbecause there is a well established market need – for PLF [premium large format] and for 3D. Both of them are places where exhibitors can make more money. PLF gives you an opportunity to give a differentiatied exerience and you can charge more for it. 3D has been around for longer. Ever since the “Avatar” effect. The only way to get a true immersive 3D experience is to go to cinema. The most important thing about 3D is that premium, the upcharge.”

Flashing up the chart demonstrating the decline in 3D attendance (using Screen Digest/IHS data – see above). “This is what will happen in international market if we don’t fix the problem. What does this mean to exhibitors? All the money for 3D premium is drying up.”

So what’s wrong with 3D? Journal of America Academy of Optometry identified several problems. Don uses the example of how low light levels in cinema is analogous to reading in the dark. Eye strain, headache & blurred vision. “It won’t ruin your eyes – like your mother warned – but it won’t be a pleasent experience,” he observes. Stereopsis – it is our primary cue of depth perception. Naturally simultaneous. Therefor natural preference for simulataneous L eye/R eye.

“The big issue that people aren’t talking about is silver screens. Here’s the problem – the hot spot in the middle.” Inevitable with silver screens, Don comments.

Discusses the Christie laser technology: “In our lab we have built prototypes of projectors with over 100,000 lumens – with no smoke coming out of it,” Don swears. Another advantage is cost over life time – 30,000 hours with no lamp change. Works with most 3D systems – except Dolby (“will get back to that in a moment”).

RealD’s Light Doubler is about 27% efficient, meaning just over a quarter of the light put out by the projector reaches the eye. “Doesn’t sound like much but it is the most efficient one in the market for Xenon bulb, ” says Don. By way of comparison:
– MasterImage’s spinning wheel is 16% efficient.
– Static polarized glass is about 16% efficient.
– Liquid crystal light polarization is about 15% efficient.

According to Don, “A truly good 3D experience should be on a matt white screen.” Shutter glasses are only 13% efficient plus alternate L/R can be percieved as flicker. Color separation (the system Dolby 3D uses) – “on a good day you might get 10% efficiency” – but many would say it has the best image quality. Creatives want to grade use the Dolby 3D system.

Looking at the competiton’s lasers (Barco and NEC), “Large external chiller means a single point of failure.” Talk then switches to the challenges of achieving 6P laser DCI spec color compliance. Staying within the DCI triangle is a challenge, particularly for both eyes and for two colors each. Don claims that Christie is the only one in the market that has achieved this.

Christie will ship >USD $25 million in laser projectors in this FY.

Next up Christie Vive Audio