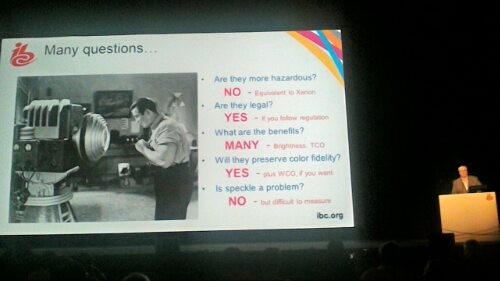 Peter  Lude’ (now with Real D) dives straight into the deep end of the many questions buzzing about laser ILLUMINATED (his emphasis) projecton, ranging from safety to speckling. He even provides a quick Cliff Notes answers to those questions (see above). He then outlines the afternoon (in two parts)

There are over a dozen laser illuminated projectors that you can buy today, most of them small projectors for conference rooms. There are about 90,000 units sold per year and 1st LIP was launched in 1Q13. Around 10,000 units sold per year would requie FDA variance. Currently all devices that contain lasers are regulated, whether or not they actually emit a laser (like BluRay players). The goal is a new laser notice by January 2015 in terms of regulations to reflect the new IEC Edition 3.

Jan Daem (Barco) comes up to stage to talk about bringing regulaion up to date with technology, but from a European perspective. Begins by talking in technical detail about what a saler is. “Thermal induced retinal damage” measurement makes it sounds scary. Talks about national and Eurpean regulation and legislation. Final situation will be Class1RGX. (This presentation has a feel of engineer white paper. Not much that I can usefully summarise.)

Matt Cowan (ETC) whose title is ‘What do we do with all that Color?’ Will deploying different laser primary selection have an impact on color grading, does BT.2020 reqiure narrow band primaries. He then does “100 years of color science in 1 slide” looking at ‘what we see, what we measure.’ He observes that color spaces changes throughout the workflow. “There’s no colors that cant be defined with X’Y”, even colors that we cannot see,” Cowan affirms. He explains to the audince how we can get any colour by mixing red, green and blue light. “Mathematics provides exact conversions among different color representations.” How does projector handle XYZ color? Through projector calibration, Cowan explains. He then did a primary color comparison, highlighting the differences between Rec.709 and BT.2020. For speckling, multiple wavlengths get close to 2020.

Don Shaw (Christie) starts off by discussing why Christie is building laser projectors. “Not because it is cool or because Barco is doing, it is because that’s where cinemas are going.” Highlights Premium Large format (PLF) that offers customers a differentiated experience (and a significant increase in box office proceeds). 3D movies allow a >30% upcharge. But 3D atttendance is declining in (US) domestic market. Novelty has worn off. “This will happen in international markets unless we fix the problem.” LIPs are that fix, apparently.

Study in Journal of American of Optometry highlights the problems with 3D, including nausea, dizziness, etc The bigest reason, according to Christie, it is due to low light level on the screen. “Dim 3D films is like reading in the dark.” Other area of improvement: cross-talk, glasses comfort/fit, system efficiency (brightness, power efficiency), conventional silver screens (hot spots, uniformity issues, speckle – based on audience feedback from laser demos).

He then goes o to discuss the Christie 6P system architecture: Dual Projector Heads, Fibre Coupled Lasers, which are scalable, upgradable, built-in cooling, redundancy. ‘Remote-able’ light source – for boothless cinemas (“Put in three more rows of seats!”). 6P lasers projection and color space means challenges in selecting primaries. “Christie 6P laser achieves DCI P3 in both eyes – no other commercial laser projector system achieves that,” Shaw definatly states with the statement in bold on its own slide. He elaborates that laser phosphor is not more efficient than Xenon for cinema right now. “The time for RGB laser projection is now!” and “Christie customers are all actual paying customers.” Over $30 million in orders this year. Two clips from Disney’s Frozen and Fox’s Avatar are screened and both look bright and colourfull.

That evening 20th Century Fox’s “Dawn of the Planet of the Apes” is shown using the 6-P Christie laser in 3D with 14fL off a 1.0 gain matt white screen (with Dolby Atmos). Same as “Life of Pie”, it is not the brightness that is primarily noticable (though you do) but the strong colours, high level of detail even in dark scenes and the vividness and clarity of the image. As I’d said earlier, it is going to be tough for me to go back to seeing regular (dim) 3D after this.

[The second part was more technical and I had to cut it short for a chance to do the rounds of the trade show floor and talk to the likes of Qube exhibiting.]
Follow me
Patrick von Sychowski
Editor at Celluloid Junkie
Patrick was a Senior Analyst at Screen Digest, went on to launch the digital cinema operations of Unique and Deluxe Europe, then digitised Bollywood at Adlabs/RMW, and now writes, consults and appears on panels about cinema all over the world.
Follow me
Latest posts by Patrick von Sychowski (see all)
Send this to a friend