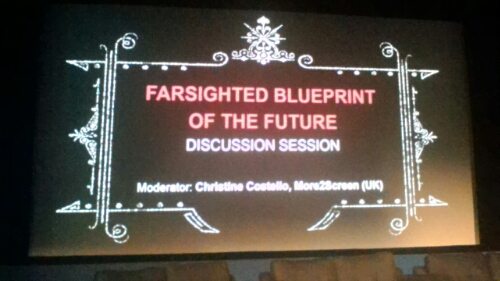 Christine Costello from More2screen introduces the session looking ahead by quoting Bill Gates about over/under estimating change in the short/long term, as well as getting it wrong (as Bill Gates and Microsfto did with the Internet).

There is no panel, but an opportunity for discussion between Christine (a true veteran and event cinema expert) and the audience. She starts off by giving a background to her companyand the industry, ticking off several firsts and partnerships with the likes of Glyndbourne and the Royal Opera House into UK and international markets.

More2screen has gone out on 5,000 screens, 60 territories for 150+ productions (as you can see from the slide at the bottom). What’s new in 2014 is the British Museum for the first archeological exhibition (earlier ones had been art-focused), representing new genres. “Where there is new technology, we want to be using it,” Costello affirms. Which ties in neatly with how they also did the 4K concert for Peter Gabriel this year.

Key themes are using new technology, building new genres, collaboration, innovating wherever possible and partnering. “That’s us. Now we come to the big question: how will event cinema change ib the next ten years.” Admitting that none of us have crystal balls, she sent out the question ‘How will Event Cinema landscape develop in the next decade?’ to leading members of the industry all over the world.

The question/statement was: Event cinema is on a steady growth curve and by 20202 will represent the following % of my territory’s box office: 5%, 10%, 15%, or other. In the US it is just 2% today. The majority seem to be voting 10%, with 3-4 people voting 15% (including myself and Hancock, so that’s the analyst’s guess) with Rickard and Isabelle voting for ‘other’.

Hancock is asked why he voted 15% and he says that he thinks it might be more than fifteen. He  points to the curve going up (aknowledging Nielsen’s data as well): “Looking at it as a whole for the past ten years is the business talking to itself and preparing itself for what it can do. The business hasn’t been ready until now, but the busness is now in a position to comunicate it to the consumer. After that the growth won’t be steady, it will be exponential because of consumers getting on board. The idea of charging a premium of the experience, whether Atmos or Imax, it enables an experiential thing that wasn’t possible before, for which apremium ticket price can be levied.”

Hancock says that today alone he has spoken to five content people who are thinking about what they can do in cinemas, which creates an exiting opportunity. He thinks that it could be as high as 20 per cent or more – though to be clear, he had been asked by Christine to be a bit bold and provocative with his estimate to spark a discussion. Giovanni Cozzi intervenes that 20 per cent might be the case for the UK, but the UK is a special case. Christine agrees that North America is not as developed and Hancock clarifies that he was speaking to his territory (UK) specifically.

Microphone then goes to Rickard giving a Swedish perspective. “I’m not sure territory is a relevant term, but that we should be looking at it in terms of cinema chains.” For his chain (Folkets Hus & Parker) the turnover for event cinema is as much as 30% or even more, particularly as many of these cinemas are located in rural and countryside cinemas.

Christine asks for input from a larger exhibitor. The microphone goes to John from Cineworld. This year his circuit will do 3% but next year it will be 2% because 2015 will be such a big year from cinema box office. Cinema attendance is likely to go up from 2.5 to more than 3 on the back of Avengers 2 and Bond 24. Next  word from Kinepolis, who says that it will depend on how the industry will organise itself. “Our experience is that it is not possible for everything to take place at the same time,” with them having three-four events on at the same time. “I don’t think people will be prepared to go two times or more to see the same content,” he says .

Claudia speaks from a Central and Eastern European perspective for distribution. She gives the example of a cinema in Budpest where 50% of the box office come from event cinema. “We achieved this by creating a very segmented choice; but at the same time the numer of visitors is decreasing. So you have to work really hard on the marketing side and giving them a broad choice of topics, as well as special live events, such as a whole day on Shakespeare’s birthday.

Next Christine highlights factors that will influence it, as seen below: 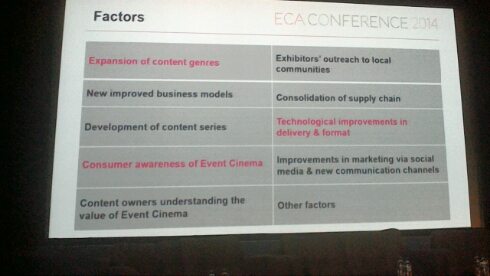 Costello then skips to what is the most compelling reason. “We exhibitors have to become like the IMPRESSARIO of the good old days’ is the quote that was quickly sourced the Graham Spurling.  Costello highlight that event cinema is “the least vulnurable revenue stream.” 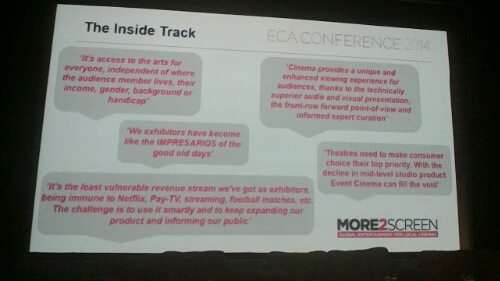 Costello then passes the word to British Museum’s Patricia Wheatley who talks about the survey they did for the Pompeii exhibition (budget restriction meant they couldn’t do it for Vikings). Interestingly 46% of people who saw it in cinemas wanted to go and visit the exhibition in person. People also flagged how the cinema experience was able to get up close with the artefacts on display. “98% of people we canvassed wanted to see more of the same. But it is a crowded arena so we have to be more strategic.”

With that the short session had to wrap with a few positive words from Costello urging us all to innovate. She also marks the anniversary of someone in the audience doing their 500th event this year, so there is a drink prize to Graham Spuring, “a real pioneer of event cinema.” He jumps up on stage and embraces Chrsitine as he grabs the whiskey. “We love it, we did it in 2009 in Ireland with the only three cinemas in the country that offered Met Live and realised that live is the only way to go. We did British Museum and it did 56-86% of the box office on the Monday it went out, so if you didn’t have it then you didn’t have anything. 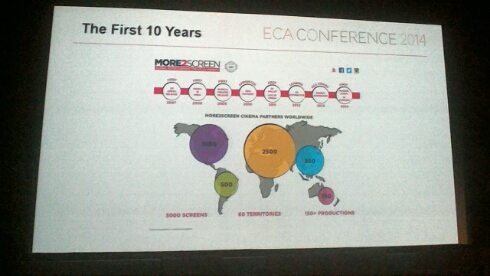