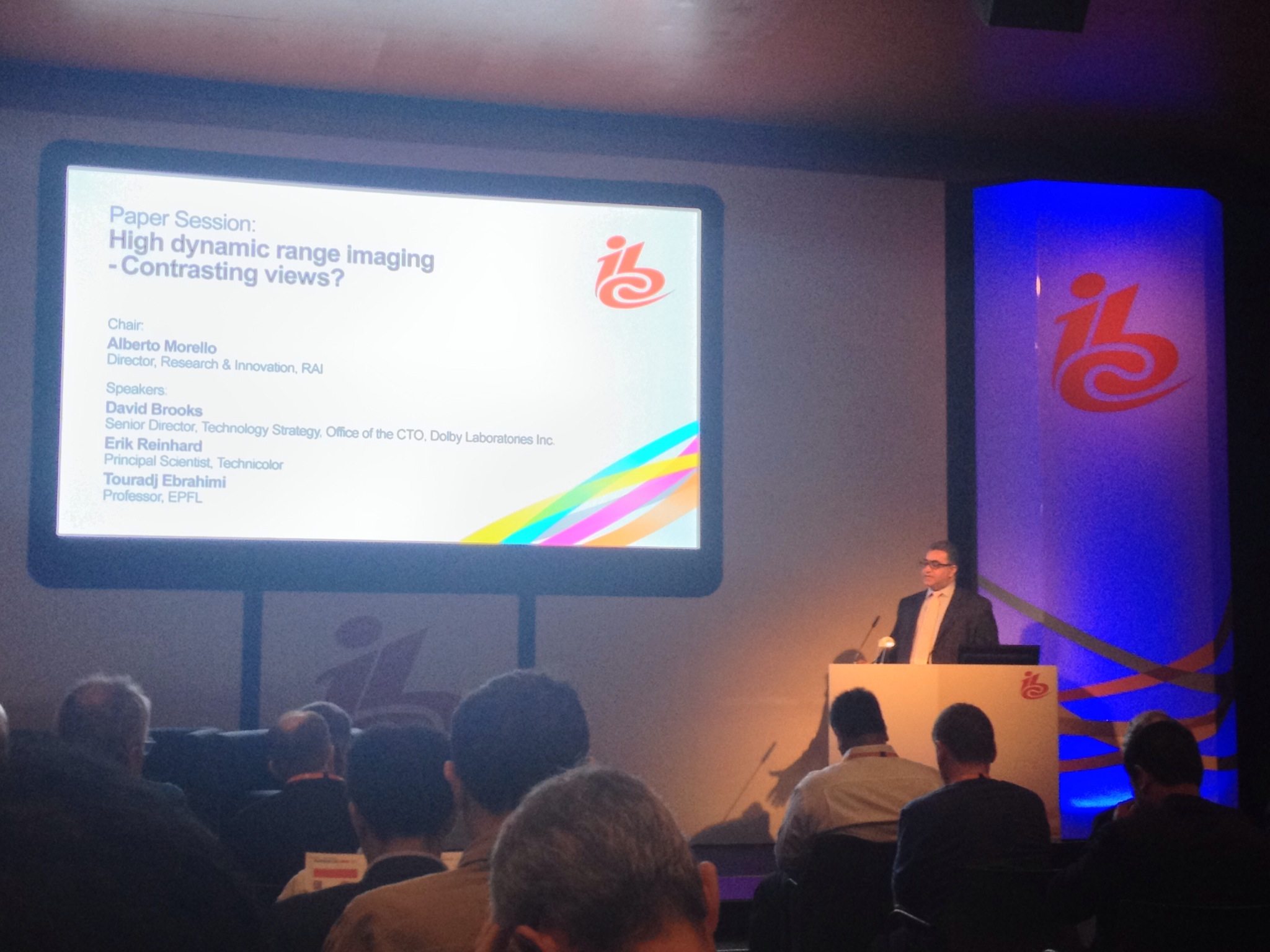 The quest for better-(not-just-more)-pixels is a big theme at this year’s IBC conference – primarily for television but with major implications for film and cinema too. For anyone thinking of buying a 4K/UHD TV, this is the session that tells you to wait until more than just the resolution of the big television sets improves.

Session chair Alberto Morello (RAI, Italy) calls this one of the “most interesting development in the evolution of video.” He singles out (more) pixels, (higher) frame rate and HDR (high dynamic range) as the things that “will give pleasure” to our viewers.

Touradj Ebrahimi (EPFL, Switzerland) goes up to the podium first to present an overview of the topic. He starts off by confessing to being an IBC virgin, but being ‘impressed’. Prof Ebrahimi stresses the importance of being able to measure to quantify improvements such as HDR.

Tests used Dolby Pulsar Display 42″, calling Dolby their “good friend” who “defined past, present and probably future” of high quality innovation. For content they “begged again” and Dolby provided that as well. Test material was shown sequentially and side-by-side in four different grades/mappings (4,000, 1,000, 400 and 100 nit). Appropriately one of the pieces of content was “Star Trek: Into Darkness”, but he wasn’t authorised to show that to us.

Scores were graded on a left-right /better-worse scales. EBU and EPFL results seemed to match, with big jump in improved perceived quality between 1K and 4K nit (peak brightness). Conclusion is that “improving brightness from 100 to 400 to 1,000 to 4,000 nit brings perceived quality improvement at every step” and especially at 400 nit. Not mentioned but this has obvious implications for cinema 3D and laser projection, though this test was strictly home viewing environment.

A representative from Pixar asked what creative choices were made for the source material. Prof Ebrahimi said that was an excellent question…to which he did not know the answer. Trust Pixar to be on top of this topic. They tend to be so cutting edge on these issues that they either find the errors in established research or effectively ‘write the manual’. They raised some of the toughest questions during the DCI/SMPTE process for digital cinema specifications.

Next up was David Brooks (Dolby, USA), whose company supplied the monitor and content for the previously discussed testing. ‘The Art of Better Pixels’ is the title of his presentation. Points out the range of brightness in real world from 300,000 nit for sun reflecting off car hood outdoor to 1.7 nit for the black leather sofa indoor.

So how does it relate to Entertainment Dynamic Range? Dolby’s lab modified a digital cinema projector (prototype HDR P3 display) that could go from 0.04 nit to 20,000 nit. This gave a bigger range than even the Dolby Pulsar Display. Conclusion was that HDR definition should cover 0 – 10,000 nit. This satisfies 90% of viewers. “Hitting 20,000 is harder, maybe worth it, but we recommend 10,000.” Interestingly, “there is really no benefit in reducing the peak brightness.”

Getting EDR to the home will involve lots of changes, starting with the production workflow. Reading between the lines, Netflix might be streaming House of Cards in 4K today, but it doesn’t sound like it is catching all the possible picture quality improvements, even if you had a TV/display capable of doing them justice. Dolby is proposing a dual layer transmission system, to be backwards compatible.

Thomas Edwards from Fox asked that with the best current television sets achieving 1,000 nit or at best 1,500 nit output, should we wait for sets that can do 4,000 nit. Brooks invited him to the Dolby both where he can see a monitor that does 2,000 nit (although that doesn’t really answer the question – or maybe it is a case of seeing really is believing).

Erik Reinhard (Technicolor, France) says that he is “still an academic at heart”, so warns that he might answer questions with “I don’t know.” Kicks off with HDR – A Brief History that starts in 1968 with Thomas Stockham’s digital imaging (12-bit capture board and 8-bit display). After many intermediary developments, today”there is a resolution race going on from HD to 4K to 8K, so pixels are getting smaller and smaller,” he observes.

HDR is currently used in special effects, security (cameras), games/rendering and photography. Reasons for it is visually superior experience, better immersion and better depth. Still missing from this list are film making, video and broadcast. “Video is still hard to master,” is the explanation for this. “But core HDR research is now leaving academia and entering the industry.” [I guess he himself is a prime example of this.]

Displays are improving faster than cameras in HDR improvements, though with the earlier caveat that this refers to electronic capture, not photographic film, which has been HDR for about a century. [Want to see an HDR film? Interstellar in 70mm will impress you, is my personal recommendation.]

This ended the session. The person in the chair next to mine complained that there was an over-emphasis on brightness in at least two of the talks, which is only one component of HDR. But this really is an academic subject that is only starting to filter through the industry and soon to consumers.

I wish I could share the post-session talk I had with a senior Dolby representative, but it was off the record. Suffice to say that some interesting things will be seeing the light of day (or maybe rather showing it) before the end of the year.

Tomorrow the IBC Big Screen Experience kicks off and we will bring you topics with wider cinema relevance.