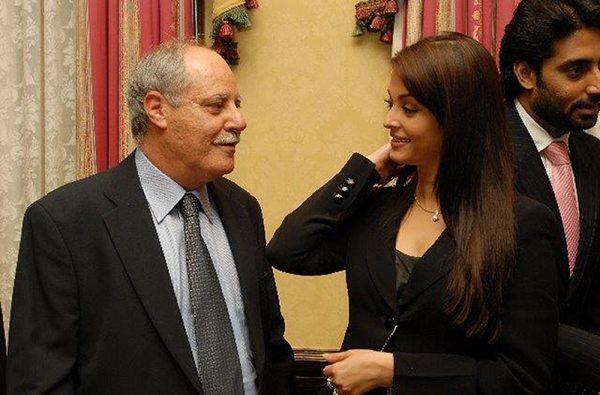 Next week is ShowCanada, so what could be more appropriate than a long profile of the CEO of Canada’s largest cinema company, Cineplex Entertainment’s CEO Ellis Jacob. Lots of interesting information here, like the fact that close to 40% of revenues come from “premium offerings”, such as VIP screens, Imax and 3-D films.

In the most recent quarter, Cineplex revenue reached $280 million, up 12.9 percent from the same quarter a year ago. Food-service sales were up 14.8 percent, and box-office take jumped 7.6 percent…

He said he hopes that within five years, 30 percent of box-office revenue will come from “other than Hollywood movies”. Meanwhile, Cineplex has started extending company brands outside its theatres: there’s a YoYo’s Yogurt Café in Guelph, Ontario, and a Poptopia is about to be launched in Toronto.

“We’ve got 80 million people coming through our doors,” Jacob stated. “We can build brands. We can create value for these people who use our Scene loyalty program, which has 5.6 million members. We’ve got nine million who downloaded our mobile app. So there’s lots of opportunities for us.”  LINK

USA – If you are a PlayStation fan, you will be able to watch Sony’s E3 press conference in on of 40 cinemas (sorry, USA and Canada only). But will it be in 4K?

Sony will be giving gamers a new option for watching its upcoming E3 press conference: your local movie theater. The company announced on its blog today that a live version of its PlayStation E3 2014 press conference will be shown at movie theaters across the United States, bringing with it some extra content and exclusive footage.

The streaming movie theater event will take place live on June 9th, and will feature a high-definition simulcast of the PlayStation E3 press conference with host Geoff Keighley. There will be some perks for those who choose to watch it in the cinema rather than online.  LINK 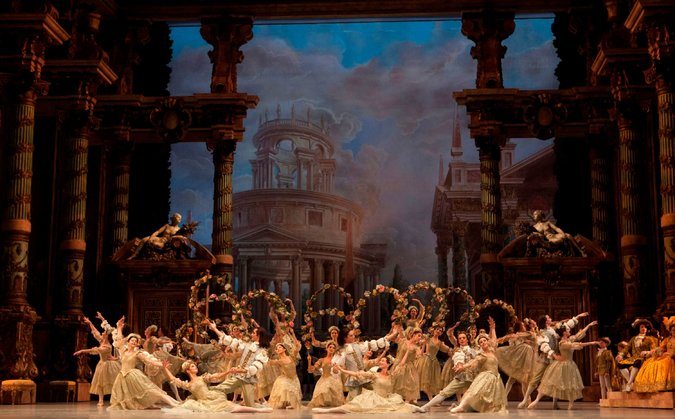 France – The New York Times looks at cinema opera screenings in France, which despite its great opera tradition has lagged the likes of the Met and ROH in findings its way to the multiplex.

In Paris, the decision was delayed for administrative and artistic decisions. The late Gérard Mortier, who was director of the Opéra de Paris from 2004 to 2009, reportedly hesitated because he saw the screen as a barrier to the opera experience. Then there was the knotty problem of renegotiating contracts with the artists and musicians and with the television stations that historically have had audiovisual rights for performances at the Paris opera.

The issue of legal rights remains tricky, as the Opéra de Paris and its cinema partners found out to their chagrin this spring. Posters were up, and tickets had been sold, to a live performance of “Tristan und Isolde,” the Wagner opera staged with live videos by Bill Viola, when the director Peter Sellars announced he was not willing to cede rights for the live broadcast.  LINK

USA – Hope For Film/Truly Free Film asks ‘What Tech Advances May ReInvent Cinema’s Form?’ The list is pretty comprehensive, but I’m sure readers of CJ can probably think of a few more. Our own suggestion for the most significant technical innovation in cinemas of the future could be… the oven.

HOPEfully you are currently participating in our conversation to ReInvent The Form of Film.  Although I am writing from the past, and posting in the future, I anticipate the conversation is currently based on creative solutions to the form.  I imagine some of you are wondering about technical innovation and how that may change things for us.  To that end, I wrote up this list of recent advancements to consider. Some I was able to find good links for.  Others I have not succeeded yet, and could use your help.  LINK

Brazil – More moves underway in Latin America to enable the transition to digital, this one in Brazil.

Wintex Brasil (“Wintex”), a Brazilian company and registered integrator of ANCINE, is pleased to announce a partnership with GDC Digital Camera Network Brazil (“GDC DCN Brazil”). The new integrator will offer Brazilian exhibitors a complete proposal for digitalization, including the management of VPF and financing through a FSA line of credit operated by BNDES.

Bridge loans are already approved along with main global suppliers, ensuring that the importation and installation process will take place as quickly as possible. Headquartered in Maringá, Wintex is a company owned by Cinepar SA (“Cinepar”) and Cinema Equipment South America (“CE+S”).  LINK

Russia – Volfoni is trumpeting its presence in Russia and involvement in the Kinorinok.

Next week, Volfoni proudly continues its official 3D partnership with Kinorinok, Russia’s International Film Market now in its 94th year. This edition of Kinorinok is held in Sochi, Russia on June 2nd, 2014. It’s one of the biggest events for all members of the film industry in Russia, with more than 1000 representatives from the largest companies in the film industry. Volfoni’s participation is a testament to our growing presence in Russia, as we are currently the 3rd largest 3D provider in the country.

All projections of Hollywood and Russian studio films in 3D at Kinorinok will use Volfoni’s latest high-end passive 3D theater system: SmartCrystal™ Diamond. Powered by Volfoni’s innovative Triple Beam Technology, the brightness achieved by the Diamond technology greatly surpasses all other 3D systems currently on the market, with 28% light efficiency (LEF).  LINK 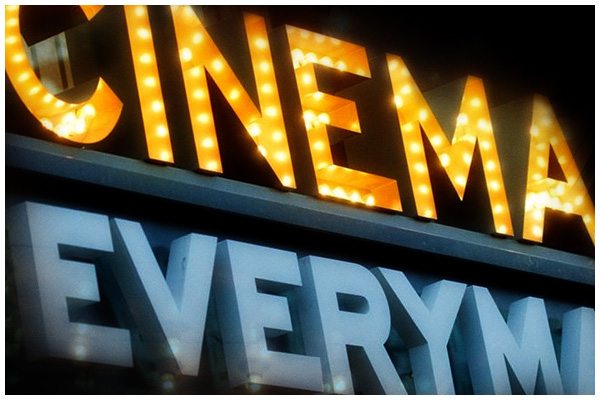 UK – A vote of confidence in Everyman Cinemas from its Chairman.

On Tuesday, Everyman had said that Executive Director Adam Kaye bought 207,409 shares at a price of 89 pence per share.  LINK 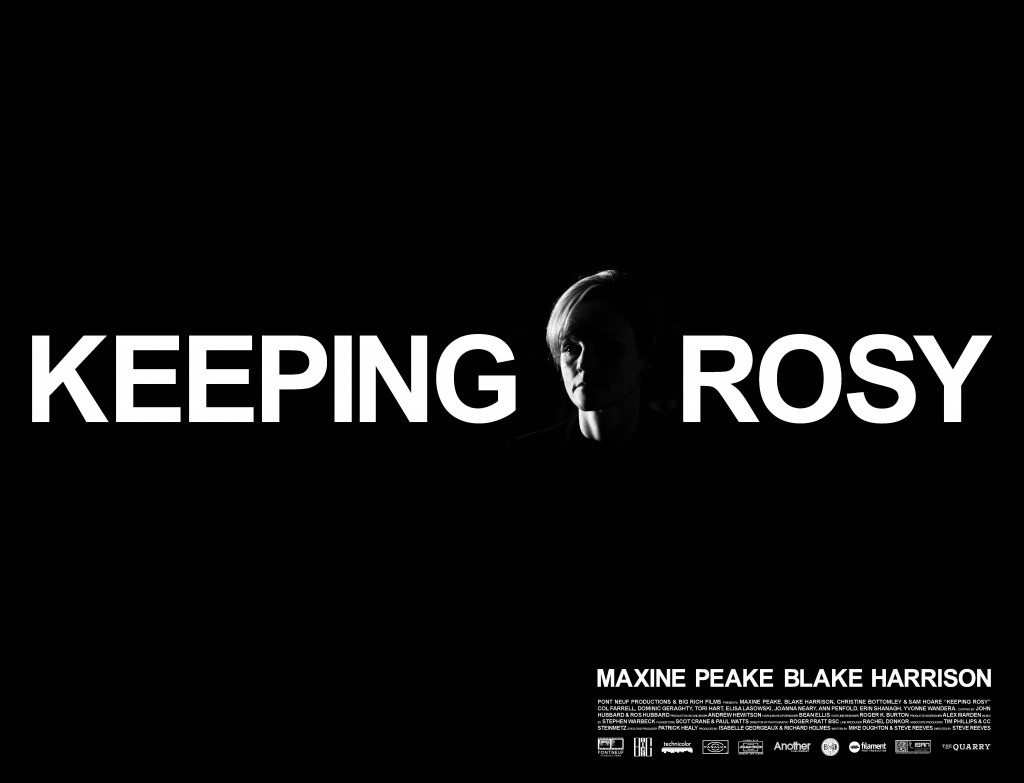 UK – A novel way to promote a small independent film: build a pop-up cinema where it will screen exclusively before going for a wider release.

In what they’re billing as the [Manchester’s] first immersive pop-up cinema, the debut will take place on the top floor of 55 Portland Street so the audience can fully immerse themselves in the surroundings of the film…

The film will be exclusively previewed in the pop-up cinema on 6th June and then will run for four weeks, before its UK national release on 27th June where it will be screened at Picturehouse venues in London and nationwide.  LINK 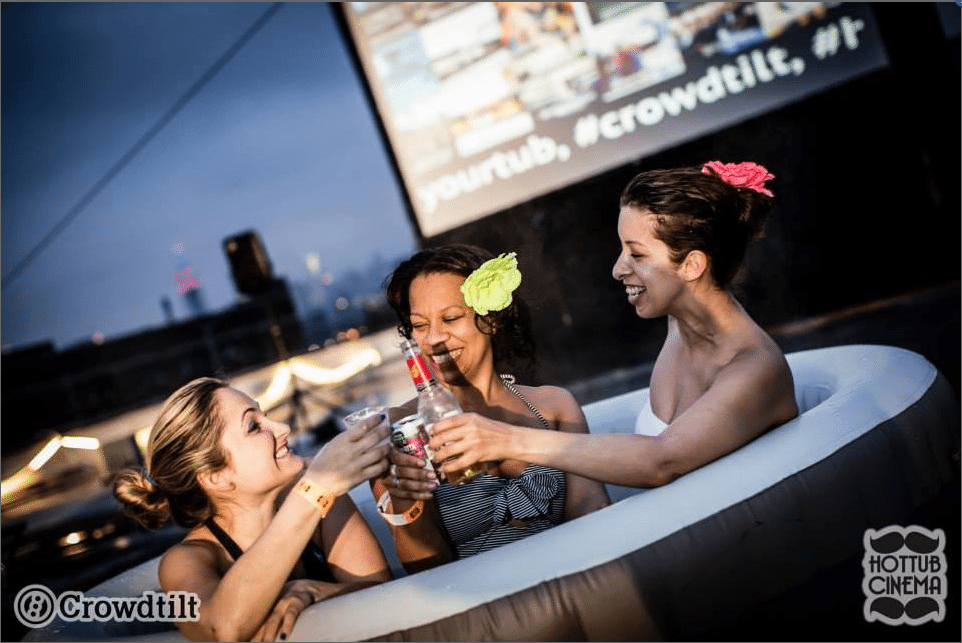 USA (NY) – We had overlooked the fact that the reason Hot Tub Cinema came to Brooklyn this summer was thanks to crowdfunding efforts. Now anyone can start a campaign to get soggy-popcorn viewing in their home town.

On May 8, crowdfunding site Crowdtilt made just that a reality when they brought Hot Tub Cinema to New York City.

This event started in the UK, and Crowdtilt decided to bring it to New York through crowdfunding.

The event was promoted on Crowdtilt’s site, where you could sign up for a hot tub and invite friends to their tub. The event included a screening of “Hot Tub Time Machine,” an open bar, popcorn, and, of course, hot tubbing.  LINK

UK – Looks like this Welsh county of 180,000 might have to wait longer still for a local cinema, despite the last ones having shut in the 1980s.

Caerphilly councillors at the regeneration and environment scrutiny committee received an update on the phase 2 of the cinema project for the town, which has proved more difficult than first anticipated.

In September 2012, the council’s cabinet approved plans for Odeon to be confirmed as the preferred tenant for the cinema, but following the tender process for the cinema development’s construction, a review said the delivery cost is likely to exceed the currently allocated project budget of £6.9 million.  LINK 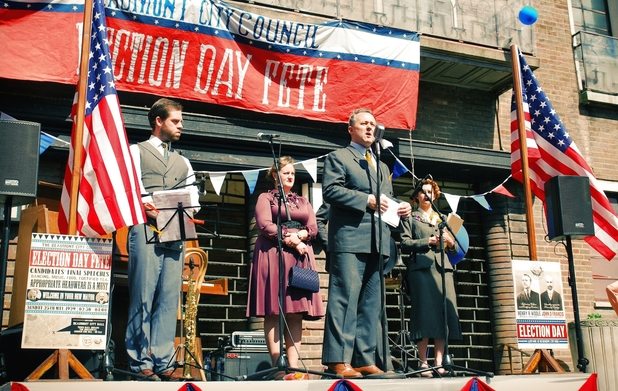 Now that Secret Cinema has concluded its 21st ‘Tell No One’ production we can tell you that the film was the Coen Brother’s classic Miller’s Crossing.

Over the space of two months, more than 16,000 people attended the event, with 30 cast members playing to 450 visitors each night.

The production ended with a large finale attended by over 1,000 people. The town hall was converted into an Election Results Day Fete earlier this week.

Secret Cinema has also confirmed that it will return with a new large-scale outdoor event later this year.  LINK