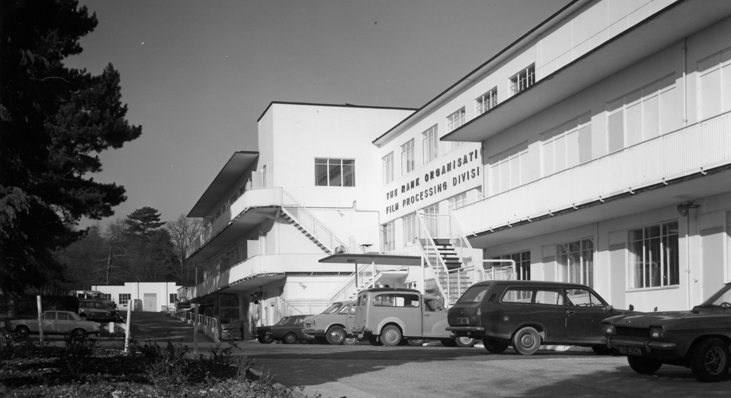 The news that Deluxe is shutting its Denham lab on the outskirts of London is not so much  another nail in the coffin of film as the announcement of the door-closing-ceremony long after the horse had bolted. Deluxe Denham had allegedly not been processing original camera negative for some time (as part of the world-wide agreement with Technicolor), while Technicolor shut down their processing operations at Pinewood in April 2013. Steven Spielberg’s War Horse was in fact one of the last major Hollywood studio films to be processed there.

Yet film lives on as two London boutique labs are now set to take centre stage, following Deluxe and Technicolor’s withdrawal from this market.

The formal closure of Deluxe’s facility on North Orbital Road in Denham, near the London suburb of Uxbridge, will be this Friday 21 March. The announcement was anticipated and comes just a week after the news that Deluxe is closing its Hollywood lab on 9 May. The e-mail notifying Deluxe’s clients went out on 19 February, but caught nobody by surprise, as the lab had already gone from three shifts to one. Industry sources say that Deluxe’s Denham staff were put on 30-day notice late last year, with redundancies in two waves in December last year and 14 February this year.

The Denham lab handled front-end processing rather than release prints, which Deluxe shifted to the Deluxe lab in Rome and Barcelona several years ago. It is likely to continue operating Deluxe Barcelona for at least a couple more years, as it is the company’s most state-of-the-art facility and capable of handling around 40 prints per day. This is probably the most that is needed in an ever-dwindling 35mm release print market as digital cinema roll-out approaches completion in most European territories.

While the closure of the 78-year old lab will unleash a wave of nostalgia and pontifications about the ‘death of film’, those of us who worked for Deluxe [full disclosure: I had my employment interview in the Denham building] knew that the company had been wanting to sell the building even before digital became a serious challenge to 35mm. Deluxe is rightly proud of its heritage, but has never been sentimental about bricks and mortar. The move also does not heralb the death of film, as we will soon see, only the end of Deluxe’s association with the lab business in the UK.

A Real-Estate, Not Film, Announcement

Deluxe has been looking to move out of Denham for a long time and sell off the land to property developers in what is now a prime area of suburban London. There were just two problems; the building was just too historic and the ground too polluted. How historic? John Pardey Architects know:

The DeLuxe (formerly Rank) Film Processing Laboratory is a Grade II listed building designed in 1936 by Walter Gropius [!] and Max Fry that will become redundant when Deluxe move their facilities to purpose-built digital facilities at Pinewood. The design proposed a new residential development on the site.

JPA in fact published a plan (called Denham DeLuxe – PDF link) for converting the Denham lab several years ago, with a contract value of GBP £42 million, where they set out:

The masterplan generates 62 houses and 136 apartments whilst the existing building is converted to contain 48 apartments. This project, as with the Oaklands College building conversions has allowed us to develop ways of making valuable listed modern buildings gain new life through subtle interventions that provide accessibility and energy efficiency – a ‘look no hands’ approach that retains architectural integrity of the original yet reveals a new layer within.

The scheme gained listed building and planning consents as far back as April 2008.

The writing was on the wall in 2011 when Technicolor and Deluxe announced an unprecedented tie-up to merge film processing facilities world-wide, which also involved the closing of Deluxe’s Soho Lab in London, in the face of the growth of digital film cameras and projectors. As Deluxe’s operations and engineering manager, Colin Flight, is quoted in  GetWestLondon, “It’s not unexpected, and it has been a steady process getting to this stage.”

So why the long wait? Moving film out was comparatively easy; it was making the site ready to be sold that presents more of a challenge. As an industrial facility with tons of chemicals used every year the ground and soil in Denham supposedly suffered significant pollution. While today’s processing chemicals are safe and Deluxe has not violated any environmental norms, it must be remembered that the lab has been operating for 78 years. Back when the lab first started, health and safety standards were far more lax.

Not The End of Film

Film labs closing is sad but won’t come as a shock to anyone working in the industry. Film is doomed as a distribution medium, but far from dead as an acquisition medium. The news from Deluxe comes at a time when film enters its vinyl age, one where it is being kept alive by enthusiasts and directors who feel that there are aesthetic reasons for shooting on film. And we don’t just mean Christopher Nolan, who presented the Scientific and Technical Oscar to the world’s collective film lab technicians last month.

Currently shooting in UK is Cinderella, directed by Kenneth Branagh, which had even been intended for 70mm shoot (same as the director’s adaptation of Hamlet), but settled for 35mm. Even more significantly, the three Star Wars films to be directed by JJ Abrams will NOT be shot on digital but on film – no doubt full of lens flares too – when the cameras start rolling at Pinewood. This is no small historical irony as it was George Lucas the pushed the industry towards digital cinematography with the previous trilogy of Star Wars films.

Overall there is still strong support for film in the British film making community, as was witnessed by the open letter sent to the BBC in 2013 urging the broadcaster to change its policy that barred 16mm/Super 16 as an acquisition format for HD films and television shows. As noted in Screen:

The letter notes that Directors UK has been “overwhelmed by complaints to us about the provision in the BBC’s Technical Guidelines considering delivery formats for HD which effectively ban the use of 16mm/Super 16mm film on HD channels. Similar concerns have been expressed to us by a wide range of experienced industry practitioners, both creative and technical.”

The letter led the BBC to reconsider and lift its ‘ban’. Industry insiders in the UK say that they are now seeing an upswing in the use of 16mm.

More importantly, based on the amount of film stock that has already been ordered from Kodak for this year, 12-15 major feature film projects are expected to go the film-and-lab route in the UK this year. In addition to Star Wars, both Peter Pan and Tarzan are expected to be shot on film I am told.

It is also worth noting just how many of this year’s Academy Awards nominees and winners used film in some form: Inside Llewyn Davis, Prisoners, Gravity, The Grandmaster, American Hustle, Captain Phillips, The Wolf of Wall Street, Nebraska, Philomena and 12 Years A Slave. As my friend and colleague Ray Gillon observed about film, ” If someone invented you today instead of digital, you would be the hottest technology on the planet.”

Putting aside its undisputed role as the archive medium par-excellence, it looks like film will similarly to vinyl to enjoy a long but healthy future as a niche format treasured by the elite. So who will gain from the closure of Deluxe Denham, given the small but significant amount of films that will still be shot on film?

Two boutique labs are waiting in the wings and look set to benefit from Deluxe (and Technicolor) withdrawing from front end film processing market.

Cinelab London made the news earlier this year with the announcement that Warner Bros’ senior technical ops veteran John Mathani was joining as CFO. Its website states:

For some, Cinelab London is the new lab in town, however we have been servicing the 16mm and 35mm film and tv community since platform shoes were in fashion last time around ! 37 YEARS.

Offering a full suite of laboratory services from front-end 16mm and 35mm neg processing to 35mm feature film distribution printing. We support film, commercial and television clients as well as content owners who wish to preserve and restore their film and media archives.

Speaking exclusively to Celluloid Junkie, John Mahtani commented that once Denham closes by the end of this week, “We will be the only fully featured front-end and back-end lab.” Cinelab is thus trying to distinguish itself from its sole major competitor by emphasizing both ends of being able to handle processing film negative as well as making film prints. The company is expected to announce its first major feature film project shortly.

i-dailies was set up by the team behind i-lab and is based in Park Royal, not to far from Denham and Pinewood. [Full disclosure: I worked for Reliance MediaWorks and was involved in both the acquisition and closure of i-lab]. On its website it proclaims:

If you want to shoot on the ultimate format of film, i-dailies provides ultimate quality of service and technical knowhow, that has been accumulated from over 100 years of our combined experience in this industry. Together with our mobile digital dailies technology, i-dailies provides DOPs with the most comprehensive, format – independent specialist Rushes service from any film or digital format to any digital delivery. Our technicians have delivered work from Stanley Kubrick’s ‘Full Metal Jacket’ (1987) to Working Title’s recent success ‘Tinker, Tailor, Soldier, Spy’. Indeed, our list of credits speaks for itself and is available upon request.

Even with the popularity of digital cameras such as Arri’s Alexa, “a variety of DOP’s still wish to shoot  on film,” Tadros affirmed. “Last year we processed films for 9 medium to large productions and expect the same again this year. On one of these productions, I did see a comparison  test of film versus digital, and quite pleasing to see that film had such a superior look to the digital equivalent. I even noticed that the last scene on ‘Gravity’ was shot on film.”

Having started less than three years ago, I-dailies has completed all its building works, and is operating three Photomec film processing machines, film printing and two Spirit telecine machines, with a preview theatre.

Although remaining tight-lipped on current projects going through the lab, Tadros confirmed that “we have been working largely with Deluxe’s (owned) C03 on a number of film projects, and during the filming season, we can be expected to process up to 100,000 feet a night.” A simple process of deduction leads us to guess that Disney’s Cinderella is currently being handled by i-dailies, with other projects likely to be confirmed soon.

Expect a fierce battle between these two labs, not just for the high-profile Hollywood blockbusters but also for independent films, television projects and commercials. In a way it is a small-scale repeat of the decade-old lab rivalry between Technicolor and Deluxe. Plus ça change, plus c’est la même chose, even in this digital age.

(It wouldn’t even surprise me if Deluxe or Technicolor ended up buying one of these facilities when they see film use stabilizing, as it is an easier and more cost effective way than it would have been to try to slim down their existing operations down to boutique size.)