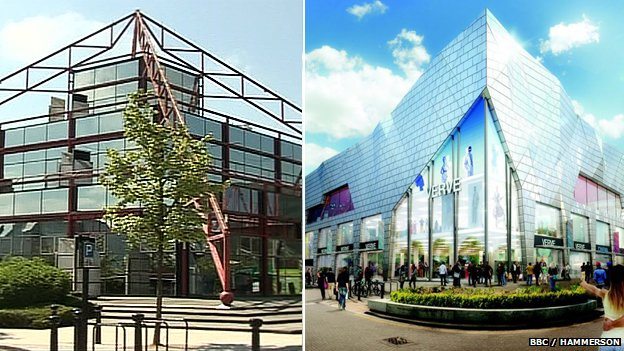 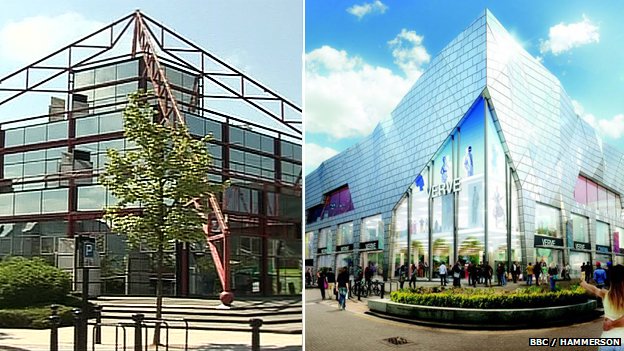 The UK’s first and oldest multiplex is set to be demolished, some 30 years after it first opened.

The Point, which resembles a giant red pyramid, was built in 1985 but the site is now set for retail development.

Campaigners have been lobbying to retain the structure, but planners have recommended the scheme be approved at a meeting on Thursday.

Site owners have said their proposals would “kick-start” local investment.

While there have been renewed calls for the building to stay intact as an important cultural site, plans to demolish it have been in the pipeline since 2012. LINK

While ambitious for its time – much like Milton Keynes’ itself, UK’s first purpose-built city after the Second World War – Odeon’s first attempt at a multiplex does not inspire much love these days. It was where budget airline easyJet’s founder tried the concept of budget cinema (easyCinema) a decade ago:

The Point, which will start showing films at the end of May this year, will have no box office: tickets will be sold online at www.easycinema.com, and there will be a computer to purchase tickets in the lobby. Savings will be made by reduced staff numbers. LINK

But without digital such staff/cost reduction proved elusive, although these days rivals such as Vue have pushed hard into self-service ticketing. EasyCinema also shot itself in the financial foot by refusing to sell concession (presumably to save on cleaning staff), leading to others selling popcorn and sweets outside the cinema.

USA: More and more cinemas are looking to expand their offerings with alcohol and fine dining.

Muskegon-area moviegoers who frequent the area’s largest theater complex will likely have access to a new menu and in-service in the next year.

Celebration Banquets LLC has applied for a Quota Class C Liquor License in the City of Norton Shores for the Cinema Carousel theater complex it operates at 4289 Grand Haven Rd.

The Loeks Theatres, Inc.-affiliated, Grand Rapids-based company is planning a three part, $2.2 million project that will include renovating the auditoriums and adding new food and several beer, wine and cocktail selections to its current offerings. LINK

City Administrator Mark Meyer is quoted as saying, “I think the intention here is to not just have another bar or restaurant, so to speak. We really want to have something unique in the community.”

Christie is right to point out that audiences are put off by dim 3D projection and that a premium charge should go hand-in-hand with a premium experience. LINK

UK: The screening of NT Live’s War Horse has proven so popular (no surprise to anyone who saw it on stage, rather than Spielberg’s adaptation) that Encore performances are being scheduled.

The cinema’s largest hall was full for the play on Thursday. War Horse will be shown again on Tuesday 18 March and Thursday 20 March, both at 7pm.” LINK

It is also the first NT Live production without a major star in the lead to appear on filesharing networks (NO LINK!)

India: Actors-turned-politicians is nothing new (particularly in India), but this must be the first time a politician appears on the big screen as India’s BJP proposes to beam speeches of its prime minister-hopeful candidate into cinemas across the state.

In a move aimed at increasing the reach and penetration of Narendra Modi’s Vijay Shanknaad rally on Sunday, the state BJP unit is reportedly planning to tie up with some prominent cinema halls of the city for live telecast of his speech. Party insiders said if the proposal materializes then it would set a precedent for other parties to follow.

On the reason behind the proposal, a senior party leader requesting anonymity said, “An owner of a prominent cinema hall is considered close to many state BJP leaders. During the course of discussion, it emerged that if Modi’s speech is beamed live at the cinema hall, then it would enable urban Modi supporters to listen to their leaders in a high-definition environment.” He added that the experimental may also add a dimension to the conventional style of canvassing. LINK

USA (CA): San Francisco demonstrates its progressive credentials with local cinema equipping its auditoriums for patrons who are hearing or visually impaired.

New technology at the Broadway Cinema movie theater in Eureka now allows both blind and deaf people the chance to experience movies in a different way.

The theater has a closed-captioning machine that displays the dialogue from the film. And for the blind, headphones describe the action unfolding on the screen.

“My wife or my kids, or whoever I’m with, don’t have to talk to me during the film,” said James Forbes, who is the president of the Humboldt Council Of The Blind. “I don’t have to go with anyone else.”” LINK

USA (WA): The same goes for the north-west state of Washington.

Kitsap County residents who are visually and/or hearing impaired will now have an opportunity to experience first-run movies with special devices, glasses and headphones during regular show times at Bainbridge Cinemas.

The five-screen theater previously offered an in-seat captioning system for the hearing impaired. With the upgrade to digital technology the process became inoperable, and hearing-impaired customers were left without a suitable format to meet their needs.” LINK

UK: Locals are objecting to the conversion of an old Pizza Express in north London after the developers insisted that they need to increase the hight of the building.

THE battle over the future of the former North London Polytechnic building in the heart of Kentish Town has led to objectors arguing that offering a cinema on the ground floor is a sweetener to get permission to build an overbearing extension on the roof.

Lewis Durham, of top-selling rhythm and blues act Kitty, Daisy and Lewis, have filed objections at the Town Hall, warning that the developers were using the idea of a cinema to sell an idea that would otherwise not be passed. ” LINK

Ireland: The town of Limerick follows in the footsteps of Cork in getting a super-sized screen. (Just don’t call it an I-M-A-X).

As part of a €2m refurbishment, the Omniplex Cinema in Dooradoyle opened its OmniplexMAXX giant cinema screen on Friday.

The new screen is enhanced with a sound system featuring 48 speakers, with bosses at Omniplex promising ‘Voice of God’ ceiling speakers.” LINK

UK: The UK town of Oldham is one step closer to having its own cinema.

THE development of the Old Town Hall restaurant and cinema plan was given a boost as cabinet members agreed works needed to advance the project.

Work at the former Oldham Town Hall will now accelerate, with the installation of a permanent roof, building work, support foundations and external stonework cleaning and repairs.

Council leader Jim McMahon said: “Some people may call into question the spending on capital projects such as the town hall at this time and think it is a risk.

“We could wait around for someone else to do it, but we would be waiting for a long time. We are getting Oldham off the list of large towns without a cinema and showing our ambitions. The building has huge historical value to Oldham.”” LINK 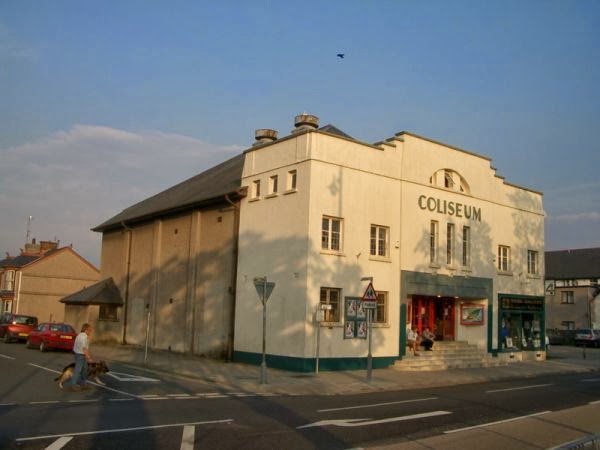 UK: Fans of the British 1960s cult series The Prisoner can now buy a cinema with a unique connection to the show.

I have read on the Unmutual website http://www.theunmutual.co.uk/ that the Coliseum cinema at Portmadog is now up for sale, as either a going concern, or for re-development. The Coliseum is, as fans of ‘the Prisoner’ will know, very much part of the history of ‘the Prisoner.’ as it was at this cinema that each days film rushes of ‘the Prisoner’ were screened at night to Patrick McGoohan and other members of the production crew in September 1966, and the following March in 1967. LINK

Australia: A cinema that was re-opened thanks to the help of George Miller, the director of Babe, has re-opened with a screening of…you guessed it, Babe.

A STAR of Hunter cinema has returned over the weekend, with the Regal Cinema’s screen flickering to life for the first time in almost a decade.

The cinema re-opened with screenings of Babe on the weekend, the first screenings since its resurrection.

Friends of the Regal president David Horkan said the opening was a first step in reviving the cinema, and one he was grateful to see. LINK

India: “Carnival Cinemas has now ventured into Karnataka by opening its first multiplex in Bangalore at Rockline Mall, Jalahalli Cross. Kichcha Sudeep and producer Rockline Venkatesh were present at the inauguration. Carnival Cinemas — which has taken over Rockline Cinemas — will have a four-screen multiplex with a seating capacity of 927 at this location.” LINK UK: “HERITAGE cinema can sit comfortably with a new multiplex in Northwich, according to a community group working to reopen the Plaza.

Northwich Cinema Trust is reassuring Guardian readers that it still hopes to open the Grade II listed building, in Witton Street, despite the announcement that ODEON is coming to town.

ODEON will operate a five-screen multiplex, which is one of the key parts of the Barons Quay redevelopment.” LINK

UK: Cinemas can inspire passion, even long after they are gone and in this case, became a bingo hall that is about to make way for low-cost retailer Iceland to build a car park.

Borough councillors have given their backing to the Save the Regent campaign after a passionate presentation at the latest borough council meeting.

Campaigners are delighted with the latest development in their quest to stop Flutters Bingo Hall from being destroyed and turned into a car park.

Both Liberal Democrat and Conservative members spent almost one hour quizzing the campaigners at the council meeting last Thursday after their presentation, before deciding to offer the team their full support. LINK

As the Oscars have just concluded, we leave you with this charming short animated film from Dolby, that gives a flavour of the history of cinema and sound. It’s called, appropriately enough, Silent. Better yet, see it in a cinema equipped with Atmos. LINK

[youtube]http://youtu.be/KA6azZALMiE[/youtube]
Follow me
Patrick von Sychowski
Editor at Celluloid Junkie
Patrick was a Senior Analyst at Screen Digest, went on to launch the digital cinema operations of Unique and Deluxe Europe, then digitised Bollywood at Adlabs/RMW, and now writes, consults and appears on panels about cinema all over the world.
Follow me
Latest posts by Patrick von Sychowski (see all)
Send this to a friend