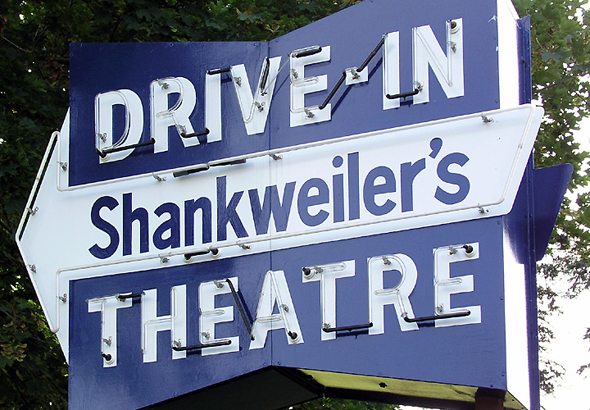 USA: Drive-in cinemas have become the twin victims of the end of analogue film and changing social habits that has mostly de-linked automobiles from cinema-going, other than as a mode of transport to the multiplex. So this is a lovely exception: Americas self-proclaimed oldest drive-in cinema is going digital with technology from GDC, Christie Digital and Ballantyne Strong. “Shankweiler’s Drive-in Theatre, the oldest drive-in movie theater in the United States opened up for its 80th season in April last year. The theatre’s owners, Paul F. Geissinger and his wife, Susan, have been upgrading the theatre throughout the past three decades and successfully turned it into a Pennsylvania hangout for people of all ages during the summer months.” I wonder if they had original Model-T Fords at their first screening. Link (PDF)

UK: “A £3m market hall built in 2008 could be closed and a multi-screen cinema built in its place with up to £100,000 spent to re-locate traders.  A proposal to Wakefield Council would see Wakefield’s Market Hall replaced by the cinema and a number of restaurants.” Link

UK: “Work beginning on the county’s first 11-screen cinema has been hailed as a “coup” by a community leader. Following a delay until after the Christmas period at the request of traders, building started yesterday on Cineworld at Broughton Shopping Park. The development will include several restaurants and a new bus hub.” Link

Ghana: “Silverbird Weija, a new 3D cinema branch of the Silverbird Cinemas serving Ghanaians with a repertoire of blockbuster movies will officially open on Friday, February 7, 2014 with the premiere of “Robocop” in 3D. Though the cinemas have been operating since the end of December 2013, the launch event will mark the official opening of the cinemas.” Link 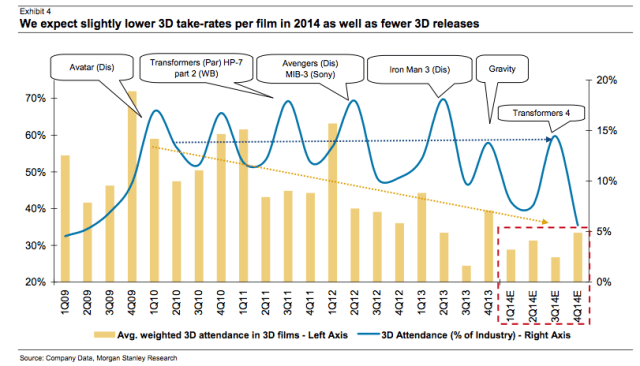 USA: Will box office in 2014 be down because of fewer 3D titles? One analyst seems to think so. “While 2013 was a record year for US box office returns, with $10.9 billion in ticket sales, analysts at Morgan Stanley argue that 2014 won’t be a repeat, mainly because of fewer 3D releases (it estimates the release of 28 compared to 34 last year) and lower attendance rates (39% compared to 42% last year) for those 3D films that are screened.” While the article points out that there will be no Pixar films in 2014, it wrongly claims that “Frozen” was a Pixar film (it was a Disney film) and the last few Pixar films since Toy Story 3 have under performed critically and commercially. More interesting will be to see if Interstellar will be a 3D match for Gravity. Link

India: Mexican chain Cinepolis has major expansion plans for India, having rapidly become the country’s fourth largest operator. “”We have about 500 screens signed at various stages of development. We don’t know when all of them will become operational given the challenges in the real estate development. But, realistically speaking, we will have about 400 screens operational by 2017,” said Javier Sotomayor, Managing Director, Cinepolis India. “We expect to open 60 screens in eight locations this year alone,” he said.” Link

UK: Anti-social behavior outside cinema is just as bad as anti-social behavior inside. This one from Liverpool. “Police promised to work with Showcase Cinema to tackle anti-social behavior after gangs of youths vandalized cars. The force told the ECHO neighborhood officers would meet with the cinema manager to provide crime prevention advice after cars were damaged on Saturday and Sunday, January 26.” If people can’t be sure that their cars are safe while they are in the cinema they will have one more reason for not going to the cinema. Link

UK: Theatrical trade publication The Stage asks whether event cinema is a ‘help or hinderance’ for regional stage business. “Executive director of the Stephen Joseph Theatre Stephen Wood recently made a comment in The Stage raising concern about digital theatre and its impact regionally. My own concern is whether, at this time of further impending arts cuts, there is a risk that some regional venues might consider that theatre screenings – with their easy accessibility – should become the dominant component of its drama content programming.” Doubtful but merits debate. Link

Senegal: While Ghana might have a brand spanking new 3D cinema, nearby Senegal is less fortunate in big screen offerings. Though thanks to a Canadian charity there is ambulatory big screen treats. “By day it’s a Plan-operated vehicle used to visit our programs in Senegal but by night, the 4×4 vehicle turns into a portable movie theatre, capturing the attention of hundreds of new movie-goers every week. Since its launch, the Cinébus has travelled to more than 130 villages across Senegal, reaching thousands of people.” Those hoping for “RoboCop” might be disappointed to learn that they mostly show educational films in the local language. Appropriately enough one of the two Cinébus drivers is called Pathé. Link