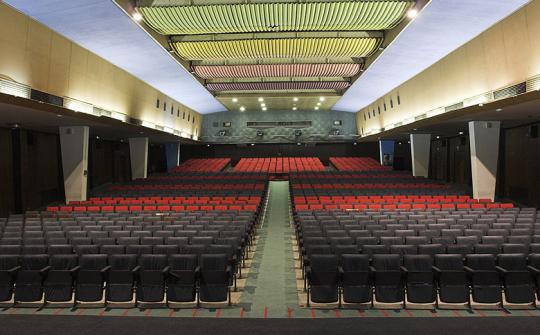 Croatia: The biggest trial in Croatia’s history, for a Ponzi scheme that defrauded hundreds, is taking place in a cinema. “With around 700 people taking part in the Forex trial, no courtroom in the country is bigger enough to accommodate those numbers, so it was decided to move the trial to a cinema in the capital. Nine defendants will be in the ‘box’ today, charged with financial fraud against 681 complainants, totalling around 18 million euros.” The Student Cinema costs 1,000 per day. It is not known if it also screens The Wolf of Wall Street in the evening, though it would seem appropriate. Link.

Canada: A letter to Ottawa Herald claims that the city’s Plaza cinema is the country’s oldest. “is the oldest of its kind in the nation, perhaps even the world [sic]. While architecturally it does not show history as well as many of our beautiful downtown buildings, it could very well be the vehicle used to share our other treasures with the world.” Link.

Australia: “A MEASLES warning has been issued by the Health Department amid fears visitors to a Perth cinema may have been exposed to the highly-infectious disease. Anyone who visited the Garden City Hoyts Cinema Complex in Booragoon around noon on January 8 is warned to watch for symptoms of the disease between now and January 26.” Link.

UK: More on community fundraising for cinemas. “Residents are being asked to donate £10 to finish off the restoration of the former Odeon cinema in St Albans. The London Road building is set to open this summer after being transformed into a £2 million art deco masterpiece, renamed the Odyssey.” Link.

UK: Curzon’s Cinemas Renoir in the heart of Bloomsbury is set for renovation. “If Camden Council’s planning department give the go-ahead, its current two screens will be converted into six smaller theatres,” It started out as one screen and now it will be six! Link.

UK: Bolton Council have approved plans for redeveloping a shopping mall that will include a cinema. “The project designed by Wren Architecture & Design will see the creation of a nine-screen, 1,200-seat cinema within the existing centre. The 30,000 sq ft cinema will be installed in part of the 640-space three-storey car park, with partial replacement of parking spaces above.” Link.

UK: A former North London Polytechnic and one-time Pizza Express building in Kentish Town is set to be turned into an up-market arthouse cinema. “The New Journal has learned a leading cinema chain who offer upmarket film-going experiences with posh nibbles, cocktails and sofas for two are set to move in. The type of films on the bill would be a mix of trendy foreign flicks, “classics” and the latest releases.” The building has been Coronation Gardens Cinema between 1911 and 1913. Link. 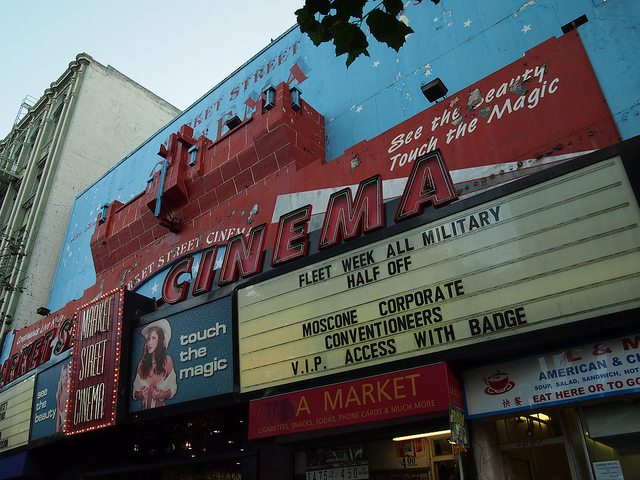 US: Legendary San francisco cinema is set to be razed and replaced by a condo building. “Historic, seedy and possibly haunted Market Street Cinema at 1077 Market Street has joined the march to oblivion, as its owners have agreed to sell to a developer who will raze the 101-year-old movie house turned strip joint turned turned ghost palace.” Link.

Russia: THR reports that the future is looking uncertain for Russia’s proposed cinema museum. “engineering surveys of the building that was proposed to house the facility revealed the site is in too poor condition to preserve a collection of more than 400,000 pieces of film memorabilia and an archive of classic films.” Taking a dig at Russia’s Minister of Culture, the museum’s 76-year old founder and head says, “”The current situation around the Cinema Museum once again proves the incompetence of the people who think they run culture,”” Link.

Poland: Fresh from the announcement of the merger with Cineworld, Europe’s second-largest cinema operator has ambitions to compete with Disneyland. “Warsaw-listed movie operator Cinema City International will use the cash from merging its cinema business with UK-based cinema giant Cineworld for investments, with focus in the first place put on amusement park project, Park of Poland, CCI CFO Nisan Cohen said on January 13 2014.” Link.

Vietnam: “All Megastar cinemas have been renamed CGV as of Wednesday, January 15, announced the CJ CGV Group of South Korea, the new manager of Viet Nam’s biggest cinema chain. CGV cinemas will also be installed with 4DX, a motion picture technology that provides a four-dimensional cinematic experience.” Link.

Sri Lanka: The Media Minister is promising an ammendment to the National Film corporation Act that is credited with having revived the domestic film and cinema industrie.. “Accordingly 35 cinema halls reopened by 2005. The amendment of the National Film Corporation Act commenced as an initial step to introduce a modern cinema. The prime aim of the amendment was to make provisions for digitization.” and “Discussions are also underway with investors for the launch of the strategy for digitalization.” Link.

India: The Chief Minister of south Indian state of Karnataka wants to inform uniform prices on multiplexes. ““When [neighbouring state of] Tamil Nadu can do it, why can’t we? Multiplexes are clean and the ambience is good, but they should not be allowed to charge so exorbitantly. We will put an end to such a practice,” he added.” Cinema tickets already have a price ceiling and multiplex operators have responded meekly. Link.

Fiji: Despite only ever having produced one domestic movie, Fuji is set to get its third multiplex. “The $6 million cinema multiplex in Nadi is expected to be open for business from July this year,” with four screens showing Hollywood and Indian films. Link.

It seems appropriate that Croatia’s largest ever trial should be taking place in a cinema (see first item), as it was just outside of Zagreb that Orson Welles shot most of his 1962 Kafka adaptation of The Trial. Link.