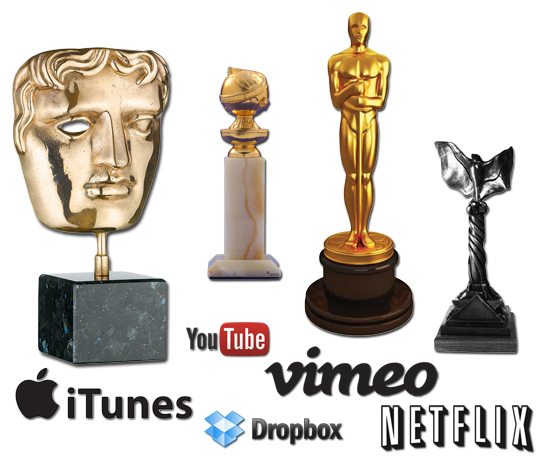 For the first time ever, Internet platforms have overtaken DVDs for distributing the largest number of “awards screeners” to industry professionals voting for year-end accolades. This post gives a breakdown analysis of the various streaming and download formats, with iTunes and Vimeo battling for the top position while fending off smaller rivals.

With the movie awards season upon us, Hollywood studios and independent distributors are fighting to get their films seen by the voting members of AMPAS (the Oscars), BAFTA, HFPA (Golden Globes) and the various film professional guilds (DGA, WGA, SAG, et al). Though studios prefer voting members to see their films in cinemas, the reality is that many will have to watch them at home on so-called “screeners”, particularly given the glut of prestigious films released towards the end of the year. Traditionally this has meant sending out VHS tapes (in the 90s) and ultimately DVDs, which tend to have embedded watermarks that are either visible (‘This DVD screener is the property of Studio X and not to be re-distributed’) or invisible (identifying the voting member it was sent to via a unique code).

The cost of sending out thousands of DVDs to the various voting members can be enormous, even for big distributors, particularly if they are individually watermarked. For films released earlier in the year commercial DVDs are often used, but recent releases like “The Wolf of Wall Street” or “The Hobbit: The Desolation of Smaug” need to be individually watermarked so they can be traced back to whom it was sent, in case this version is ripped and uploaded to the Internet, as has occurred in the past. Various attempts at new technology has been tried, such as Dolby’s encrypted DVD Cinea format, which involved sending a modified DVD player to each voting member of BAFTA and AMPAS. While working technically, it proved too cumbersome for voters who were often away from home over the holiday and couldn’t watch the encrypted DVDs on regular DVD players while traveling. Some studios have also begun sending Blu-Ray discs, with Warner Bros. first and Universal Pictures following last year.

This year Internet distribution has emerged as the cost-effective method preferred by smaller distributors, with many turning to streaming or downloading as the best way to catch the eye of voting members, at least in this case those of BAFTA, the British Academy of Film and Television Arts.

With voting already open and the holidays around the corner, most films have been distributed on screeners with some exceptions (“12 Years A Slave”). DVD is still popular, with 50 films sent out to-date on physical media. But for the first time ever Internet distribution has overtaken DVD with 56 films distributed to voters on-line. Internet distribution is proving particularly popular for non-Hollywood distributors and especially for films in the Documentary and Foreign Language categories, as well as independent English-language films.

Below is a breakdown for films distributed by platform (as of December 20th):

Of the above three (3) were also distributed on DVD (of which all 3 were on iTunes).

Of the above four (4) were also distributed on DVD (of which 3 iTunes and 1 Vimeo).

iTunes thus dominates in every category. The strong showing by Distributor’s Own Website is heavily weighed by documentary mini-major Dogwoof, which has released all nine of its films on both iTunes and its own website.

Of the 18 distributors who have only distributed one film on-line, Vimeo is the preferred platform by some margin. They also account for all of the three platforms that have just one release on them (YouTube, Dropbox and Netflix). The one interesting ‘anomaly’ is a Hollywood studio’s specialty division, which is only distributing “Enough Said” on its own website, using Microsoft’s Silverlight technology.

Amongst the Hollywood studios, only Universal has embraced iTunes, releasing all seven of its films through Apple’s platform (six features and the Wikileaks documentary “We Steal Secrets”), of which only four (4) were also sent out on DVD screeners. With the above mentioned exception, none of the other Hollywood studios have distributed any film screeners on-line.

A clear hierarchy thus emerges for on-line screeners, with the iTunes Store being the preferred platform, particularly for films with a higher production and P&A budgets, whether Hollywood, Foreign Language, Documentary or Independent. This is perhaps understandable given the media industries extensive use of MacBooks, iPads, iPhones and also Apple TVs. Secure downloading and off-line viewing also mean voters have more opportunity to watch the films, even in a remote Alpine ski lodge with no Internet connection.

Vimeo has long been the preferred B-2-B on-line video streaming platform for media professionals. The use of secure passwords mean that viewing can be restricted to specific individuals. However, the lack of downloading or off-line viewing means that voters need access to a broadband connection to watch the film. Not all over-the-top (OTT) devices or smart televisions support Vimeo, though it does have a significant penetration rate.

The interesting platform is DMS (Digital Media Solutions), which has been carving out a niche for itself for some time in the UK media business. Its distributor client list is limited to BFI and Network Releasing. However, some distributors like Dogwoof may be using DMS technology on their websites. Interestingly Curzon Cinemas has its own B-2-C SVoD service but is using Vimeo for its one on-line screener.

UltraViolet is in this case the ‘dog that didn’t bark’. Though formally a B-2-C digital ‘locker’, its non-use for distribution of screeners seems to echo mutterings in the industry that it is a content platform without a future.
One advantage all platforms offer is that they provide the distributors with metrics of how many times the film has been downloaded and/or streamed and viewed, potentially even to the level of identifying individual voting members. Though distributors could already track voters by who replies to come to the industry-only preview and Q&A screenings. They are any ways barred from lobbying individual voters more than by sending out mass e-mail reminders of cinema screening opportunities and sometimes the chance to be sent a PDF copy of the screenplay or download/stream the soundtrack. iTunes can further in theory be popular as it offers the ‘rental’ option where the film is deleted after a certain time. However, while the film technically always remains the property of the distributor (whether on DVD or on-line screener), most distributors are likely to let award voters keep their iTunes copies, particularly given the industry backlash against the self-destructing Cinea DVD screeners. It would be interesting to know, though, how much the distributors have to pay Apple for each download, as it is not a ‘sale’ in the traditional sense for B-2-C transactions on the iTunes Store. It probably costs them more than Vimeo.
YouTube and DropBox seem like lo-fi solutions, while Netflix acquired the distribution right to The Square, so it makes sense that it will use its own platform for distribution. It is worth noting that there are several films in the Documentary and Foreign Language categories that have only been distributed on DVD, in the case of the former Made of Stone and One Direction: This Is Us, while in the latter Wadjda and Metro Manila. It could be that both of the music documentaries of famous bands have contractual reasons for not streaming/downloading related to rights issues. There are also several English-language independent films sent out on DVD. Soda (Wadjda and The Crash Reel) is thus the only ‘small’ distributor to exclusively still use DVDs and not on-line. All others either do both or go exclusively on-line for screener platforms.
The latter group of distributors may be more comfortable with streaming since S/VOD is the primary way in which their films are seen commercially and also as they are less concerned (though still affected) by on-line film piracy compared to Hollywood distributors. It will be interesting to see in the new year whether films that are primarily accessible via streaming (or streaming only) do better at the BAFTAs, or if those issuing DVDs still take home the lion’s share of awards. Awards should of course be primarily decided by the quality of the film, but the limited hours in the day of each voting member (particularly working professionals) combined with technological issues, end up having some effect. Yet the trend towards on-line distribution for ‘screeners’ of non-Hollywood films will only gather pace in the next few years.
UPDATE 31 DEC:  Two batches of DVD screeners sent on 20 Dec by two distributors (EOne and Lionsgate) totalling nine films means that in the final tally physical media won out narrowly over on-line distribution (only one additional film on Vimeo was added after the article was written). However the trend towards electronic distribution is irreversible and the questions for next year is whether iTunes will extend its lead over Vimeo and whether the major Hollywood distributors will embrace the platform to a larger extent for screeners.
Follow me
Patrick von Sychowski
Editor at Celluloid Junkie
Patrick was a Senior Analyst at Screen Digest, went on to launch the digital cinema operations of Unique and Deluxe Europe, then digitised Bollywood at Adlabs/RMW, and now writes, consults and appears on panels about cinema all over the world.
Follow me
Latest posts by Patrick von Sychowski (see all)
Send this to a friend