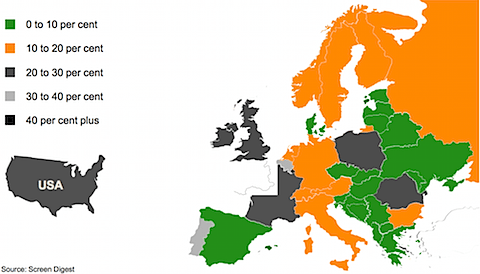 There is no question that the IBC conference, held annually in Amsterdam, is primarily aimed at broadcasters and those that supply or service them. After all, the B in IBC stands for broadcasters. However, the conference has always managed to find room for the motion picture industry in some form. Over the past decade that has mostly meant dedicating a day’s worth of seminars to digital cinema or stereoscopic production.

For IBC2010, the conference turned to David Monk, the the CEO of the European Digital Cinema Forum (EDCF), who put together a three hour panel titled “State Of Play: Developments In Digital Cinema”. (Full disclosure: I was a member of the panel). Monk chose David Hancock to start off the proceedings in an effort to provide some context for the many speakers that were to follow. As a senior analyst for Screen Digest, there are few who know the world of digital cinema as well as Hancock and so I wanted to relay some of the key points of his presentation.

Hancock’s presentation, titled “Digital Cinema: The Tipping Point Is Coming”, was filled with valuable numbers, statistics and informative graphics. He began with the following:

According to Hancock’s research, digital cinema growth began in earnest in 2005 after recommendations for standards were released. Initially it was the United States that took the lead in rolling out digital as the rest of the world only tested the waters with the new technology. Digital roll outs in Europe began in earnest during 2008. ” Over the past 18 months the number in the territory has nearly tripled.

As Hancock has stated previously in reports and presentations, what has been driving the growth is 3D content. “3D really took off at a moment when the financial markets were threatening to halt the wider roll out of 2D digital cinema,” said Hancock, who predicts there is still another six to twelve months of 3D roll out still to come, with 2D conversions beginning to pick up a little as well.

In Western Europe 70% of digital screens are equipped for 3D. In fact, the growth of 2D installations has pretty much stalled. Meanwhile, the number of 3D releases worldwide will climb to 35 this year and over 50 in 2011.

In regards to digital cinema in Europe, Hancock provided the following details:

Hancock believes a more important figure to look at is the penetration of the screen base in each country. In France and the U.K. the penetration is roughly 27%, but in most European countries it falls under 20%.

A slide detailing third party integrators showed that of the 32,000 screens in Europe there are 26,000 covered by virtual print fees and only 8,000 screens have been committed to VPF rollouts. The fact that only 75% of European screens are covered by VPFs is something Hancock has dubbed the “Digital Shortfall”. Nearly EUR €460 million (USD $636.4 million) needs to be found for 6,000 screens, many of them small or independent theatres.

Hancock reviewed several programs which are helping find some of these funds including a commercial model in the U.K. which could convert upwards of 500 screens, the Europa Cinema’s MEDIA support fund and a tax credit in Italy which has yet to be approved. Most of the public sector funds are aimed at screens that would struggle to convert to digital cinema.

The title of Hancock’s presentation referred to the point when the number of digital cinema screens will outnumber 35mm screens, which he pegs at somewhere near the end of 2011. However, Hancock stated, “The actual tipping point for me is further back. It’s the point at which everyone has decided, it’s a mental process, it’s a decision by an exhibitor to digitize.”

It is Hancock’s belief that decision has already been made by most exhibitors.