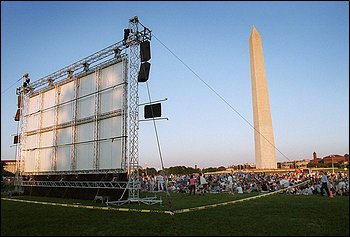 – For those that decry Imax Digital’s 2x2K imaging technology, perhaps we can interest you in JVC’s new 8K projector? (pictured above) From CrunchGear, “8K content is pretty much…impossible to find right now. Unless you were to make a motion-JPEG movie out of full-size shots from a Hasselblad, I don’t think 8K is even approaching necessary. Fortunately, it also supports 4K (and why shouldn’t it?), a more reachable standard and one at which hi-def cinema cameras are actually shooting.” At 10,000 lumens, it won’t even make a proper size Imax screen blush, but it would do justice to a fully scanned Imax film frame (69.6 mm x 48.5 mm), so you could watch the action set pieces from “The Dark Knight” at home, just as Messrs Noland and Pfister intended them to be seen;

– National CineMedia Q1 2009 Earnings Call Transcript has been posted online courtesy of Seekingalpha. It’s been a good quarter for NCM with revenue up 17 per cent. “The improving reach of our networks, especially in the larger DMAs, is continuing to aid our strategy to broaden our client base. Several new clients are buying our network for the first time in 2009, including clients in the retail, import auto, broadcast TV, cable TV, and restaurant categories. I was most encouraged by the fact that several clients who had previously bought Screen Vision exclusively began to buy our network.” Which leads us to conclude that Screenvision’s Q1 was probably not as good; – HBO will not be sponsoring Washington DC’s Screen of The Green, ending the outdoor summer cinema tradition after nine years, according to the Washington Post. “Ah, memories. The persistent bugs, the hateful humidity, the evening thunderstorms rumbling in the distance, the veggie plates and the contraband alcohol — Screen on the Green allowed us to experience all the hallmarks of a summer in D.C. at once, with a classic film unspooling on a giant screen on the grassy expanse between Fourth and Seventh streets NW. It was fine viewing on prime real estate.” There is a Facebook group to save the Screen on the Green event, but unless a new big sponsor is found, don’t expect President Obama to dig into the TARP funding to rescue this tradition. Other outdoor screening continue, though, in the suburbs, “Rosslyn is running movies from the ’80s every Friday through September at Gateway Park near the Key Bridge. Crystal City is doing the same thing with superhero movies. Other outdoor festivals are hosted in Bethesda, Rockville and elsewhere in Arlington.” As far as cheap or even free cinema entertainment goes, outdoor screenings are hard to beat, particularly in these tight financial days;

– The hunt is on for the Norwegian projectionist believed responsible for camcording and uploading a recent local hit Max Manus, according to Screen International. “The film was released on 103 prints but was illegal copies were made available online shortly afterwards. Filmkameratene tried to trace their origin from the so called ’water marks,’ different signals on each film copy which are not visible to the audiences, but readable to computers. The result has not been reported.” It sounds like the copy was made off a digital cinema screening, though it could also be the more primitive cap coding on 35mm prints. We will try to track this one;

– While box office taking are good, US exhibitors like Regal Cinemas are still having to scale back their growth plans because of the tighter credit climate, according to Reuters. “But plans to build 10 to 12 new theaters per year have been tempered by the ability of shopping center owners to move forward with projects, Campbell said. Regal expects building to be slowed to five to six theaters per year for the next three to five years, he said. The company’s participation in Digital Conversion Implementation Partners — a partnership with the No. 2 and No. 3 U.S. theater chains aimed at converting screens to digital and 3D projection systems — also had been slowed in the financing stage.” Regal is expecting growth to continue at four to five per cent for the next five years, but that is without calculating the added growth from 3D, which they say is “harder to project” (no pun intended). Quote in headline from new CEO Amy miles;

– More signs of the recession, UK’s Vue is putting on free film screenings, The Times tells us. Just don’t expect “Star Trek”. Instead Metrodome is providing some…interesting…choices. “First up, on May 15th, One Eyed Monster.  What sounds like a classic piece of schlockeroo starring adult film legends Ron Jeremy & Veronica Hart with”Buffy The Vampire Slayer” pin-up Amber Benson. Expect slimy alien creatures and unwise costume choices from an array of screaming starlets. And, most importantly, expect it for free.” The participating cinemas are: Vue West End, Vue Cambridge, Vue Edinburgh Omni, Vue Manchester Lowry and Vue Bristol Cribbs Causeway and you can get a ticket by e-mailing creditcrunch@metrodomegroup.com. Bless;

– THR.com uses the Cannes premier of Pixar’s “Up” as a jump off point for two in-depth articles about 3D in general and in Europe in particular: ‘Who’ll pay for 3-D glasses? Exhibitors, studios squabble over who should foot the bill‘ and ‘3-D accelerates as ‘Up’ opens Cannes – Film’s exposure at the fest could give 3-D an international push.’ Both articles are well worth reading and we particularly like Chris Morris’ illustration of what the black tie screening might look like (right), though perhaps XpanD as one of the sponsors and technology providers of the event might want to have a word with him for drawing anaglyph red-and-blue glasses instead of the Nuvision active glasses. We hope to bring you a picture of Co-Editor Sperling on site with glasses for comparison. Possibly even a report on the event if he can tear himself away from the Cannes parties. Follow him on Twitter here, where he reports: “The press in Cannes loved Pxar’s “Up”. Many in the press screening audience were all teary eyed at the end.“;

– Slight relief for Indian multiplexes (and cinema goers) as Bollywood film “99” opens this Friday in defiance of the Distributor-Exhibitor stand-off, while Sony Pictures is going ahead with the release of “angels & Demons” on 29th of May. But two films don’t make a box office summer and the dispute remains unresolved.