-We have come across cinemas on wheels, before, but Disney is going on step further by installing a digital 3D cinema in a train as part of its promotion for “Disney’s A Christmas Carol”. From the press release: “”Disney’s A Christmas Carol” Train Tour kicks off Memorial Day Weekend 2009 in Los Angeles, traveling across the country with stops in 40 cities, culminating in New York City in November. Visitors will be treated to a behind-the-scenes look at the magic and the cutting-edge technology of “Disney’s A Christmas Carol.” Pictured above is the state-of-the-art 48-foot-wide, 3D theatre–the first inflatable 3D theatre ever to go across the country–which will be erected onsite in each city showcasing an exclusive sneak peek of “Disney’s A Christmas Carol” in Disney Digital 3D.”” Digital cinema projectors provided by Barco, server and 3D equipment by Dolby, touch panels by HP and trian by Amtrak – only no word who is supplying the distinctly rickety and non-plush looking chairs;

– Digital Cinema integrator Cinedigm (formerly AccessIT) has been thrown a financial life line by its largest creditor GE Commercial Finance. From the press release, “The amendment significantly relaxes the financial covenant ratios that C/AIX is required to meet every quarter through the maturity of the loan in 2013. In addition, the new arrangement allows C/AIX to pay approximately $5 million in cash to its parent company, Cinedigm, as well as increase its ability to pay annual fees to Cinedigm. Reflecting the current market conditions, the amendment increases the interest rate on the credit facility from 4.5% to 6% above LIBOR and sets a LIBOR floor of 2.5%. C/AIX will pay a 0.5% amendment fee on the outstanding balance of $183.9 million.” The deal is a vote of confidence and saves Cinedigm and Christie/AIX, but staying afloat and surviving is not the same as expanding and thriving;

– Of the 53 films screening at the Cannes Film Festival 50 will be screening in digital, but the press release from Christie frustratingly doesn’t tell us which three won’t. Instead we learn that “20 [films] screened digitally in 2007 and 37 in 2008” and “Christie will provide over 19 projectors for the world’s leading film festival,” but they don’t name and shame the digital refuseniks. Is it famous film fanatic Quentin Tarantino? Or some obscure Chinese director who smuggled out a Super16mm documentary in a concealed can? We want names. So if you are involved, feel free to leak them to us anonymously in an e-mail or in the comments section. We know you want to;

-Things are going from bad to worse in India, where the stand-off between the Distributors and the Exhibitors is turning into a WWI-style war of attrition. Now the single screens are becoming the collateral casualty, according to the Economic Times. “For those who could not survive with just cancelling shows, shutting shop was the only option. Single theatres like Regal and Roxy, and the multi-screen Apsara in South Mumbai, have been closed till further notice, while the 1,200-seater Liberty theatre, a Yashraj and Barjatya favourite, also closed shop for two weeks, though citing air-conditioning repair as reason. “I have been in this business since 1972, and I have never seen such a bad time.” Multiplexes are surviving partly thanks to revival of Marathi films, but the government is suffering from single screen closures as Maharashtra state has a 45 per cent entertainment tax on tickets, while Uttar Pradesh (India’s most populous state with 190m people) taxes single screens at 60 per cent;

– The Bollywood stand-off is having repercussions abroad, with Hollywood soaking up audiences left high and dry in the Middle East, according to United Arab Emirate’s The National. “Indian film has a major presence in the UAE, given the country’s large expatriate Asian presence, but the movies are popular with Arabs and other communities too, and most open to packed houses. Several have had grand premières in Dubai even before their releases in India, among the most recent being Jodha Akbar and Delhi-6. Last year Yash Raj Films, a leading filmmaker, entered into an agreement with Dubai Infinity Holding to build an entertainment district in the city themed around films made by the production house.” Anyone living in Mumbai knows that the city is effectively twinned with Dubai, so the ripples will be felt for some time across the Arabian Sea; 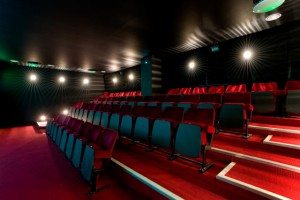 – Up-and-coming London area of Bermondsey Square is getting a 50-seat ‘uniplex’ (pictured above) called Shortwave Cinema, described by the owner as “the first cinema to be built in 21st century Britain.” From Londonist, “The brainchild of “local DJ, filmmaker and renaissance man” Rob Wray, Shortwave has a pleasingly retro moviehouse look, with comfortable old seats re-housed from the Electric Cinema and a black and red colour scheme within. Matching the old-school aesthetic, the cinema intends to eschew blockbuster releases and instead program independent fare: they’re currently showing the adaptation of David Peace’s Red Riding Trilogy, while future releases include Chilean film Tony Moreno and a season of London documentaries from the 1950s.” Looks like a worthy successor to the frankly-not-missed Lux Cinema in up-and-already-came area of Hoxton;

– Australia is set to get its first all-digital multiplex as Greater Union unveils its latest multiplex at at Robina town centre on the Gold Coast. From Perth Now, “AHL says digital cinema technology means it can now screen everything from overseas concerts, to international operas, ballet, theatre and live sports. “From a satellite feed of a U2 Concert to the State or Origin on the giant Vmax screen, it is an exciting development,” it says. The centres will retain Greater Union’s popular premium luxury Gold Class program.” Hmmmm, Vmax – not to be confused with Imax;