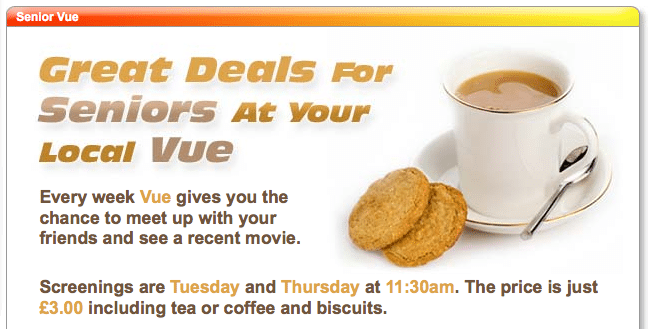 This very good article from the New York Times does not dicsuss cinema or cinema advertising explicitly. But the implications are writ large for the two about the growing importance of the aging US (and European) population in terms of impact it will have on spending habits.

For decades, older consumers were largely shunned by marketers because they were deemed less wealthy, less likely to try new products and less willing to change brands. Campaigns directed at them were described dismissively as made for the “Geritol generation.” As much as older consumers were to be shunned, young consumers — ages 18 to 34, or 18 to 49 — were desired for what were deemed their free-spending ways, eagerness to sample new products and brand-switching proclivities. The idea that they were starting in life with a proverbial blank slate of marketing wants and needs was catnip to product peddlers.

Those attitudes have been changing, for a couple of reasons. One is the recession, which makes older consumers who may have paid off mortgages seem a safer bet than younger ones who may get laid off in last-hired, first-fired downsizings.

The hard numbers bear out this thinking.

Although “18 to 49 is going to remain the predominant buying demographic,” Mr. Donchin said, “this country is aging, and the boomers are an attractive demographic.”

That appeal is because of the size of the boomer market and because, as Mr. Donchin put it, “50 isn’t what it used to be.”

Older consumers today “are not as resistant to change” as older consumers previously may have been, Mr. Donchin said, summarizing their attitude as “Show me something better, and I’ll try it.”

And the boomers are even “comfortable with digital media,” he added.

Hollywood studios are slowly waking up to this as well, with films like “The Queen” having significantly higher investment return ratios than even big hits like “The Dark Knight”.

But cinemas are only slowly embracing this fact. UK exhibitor Vue spoke on a panel at ShoWest about how it has introduced screenings aimed at an older clientele where they don’t have to sit next to youngsters chatting on mobile phones. Vue may soon want to consider targeting 45-65s with wine and cheese in the evening, rather than just the 65+ tea-and-biscuit crowd.