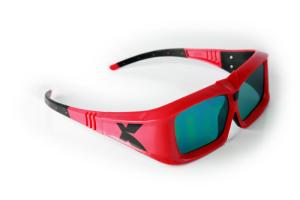 One of the messages emerging from the recently concluded iDIFF conference in Paris – other than the fact that French penchant for strikes remains undiminished in the current economic downturn – is that active 3D glasses are still going strong in continental Europe, which is holding out against the RealD hegemony of US and UK. This is good news for market leader XpanD (nee NuVision), which had just launched its latest generation of glasses, called X101 Series.

From the press release:

New and upgraded features of the redesign were added with both exhibitors and their customers in mind. They include rugged construction with built-in flex points and replaceable batteries that extend product life, a lightweight and stylish form factor that is comfortable even when worn over eyeglasses, a modular design to accommodate both adults and children, environmentally friendly diodes, and a power-saving auto on/off mechanism. The light-efficient technology delivers the brightest possible picture and saves projector lamp power. The glasses also feature long-range IR signal activation, compatibility with DLP cinema chips, and a choice of two elective anti-theft systems.

Read that in reverse and you get a litany of the problems that have bedeviled active glasses: short life span batteries, one-size-don’t-fit-all, IR signal reception problems, ugly bulky look and high cost for shrinkage (loss/theft) is what has weighed the scale down, that was boosted on the other end by no need to install silver screen, no need for complicated gears in front of the projector, ability to move between different auditoria and, most importantly to some exhibitor, no need to pay ongoing licence fees to RealD. The latter point in particular has been a sore spot in discussions between RealD and some European exhibitors.

As a result, the market in Europe is leaning towards either XpanD or Dolby 3D (Kinepolis), though RealD has made important inroads in territories such as UK and Portugal. XpanD had one more trick up its sleeve at iDIFF, where in addition to sponsoring the stereoscopic presentation of Disney’s BOLT, it also announced the latest deal with Euro exhibitor Europalaces. From the press release:

“Moviegoers who enjoy Bolt 3D on the XpanD system will be getting the top-of-the-line experience of this great new Disney release,” says XpanD CEO Maria Costeira. “Europalaces now has the power of 3D exhibition and will be able to delight customers with many more of the excellent 3D titles that are coming out of movie studios today.”

XpanD supplied Europalaces theaters with 10,000 sets of the newly upgraded X101 Series 3D active glasses that work in conjunction with an XpanD infrared emitter system to transform any DCI compliant digital cinema projection system into a 3D system. The Europalaces installations have also been equipped with 20 DCP-2000 digital cinema servers from Doremi Cinema who has been instrumental in the global digital deployment, particularly in France.

It is still too early to tell who will be the King of the 3D Hill in the long term, but it is not inconceivable that there will be regional domination of different players/technologies. And we will resist ending on a joke about the future being bright for active 3D glasses – it is still just about six to seven foot-lamberts.