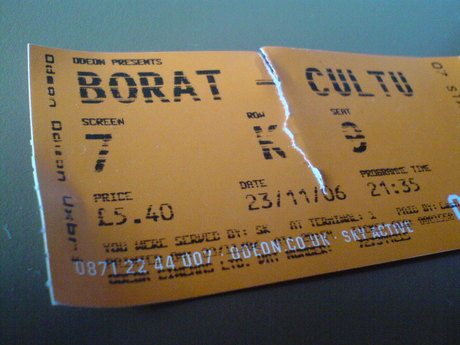 The LA Time’s cinema columnist ‘Projector’ has a humorous op-ed piece echoing the NATO/MPAA song that going to the cinema is still the cheapest form of entertainment. Not just compared to going to a sporting event or visiting the opera, but even compared to trips to the picture palace of yesteryear. But he doesn’t fall for the popcorn merchants propaganda hook-line and sinker:

Of course, Projector is too savvy to entirely buy the exhibitors’ assertion that movies “remain the most affordable form of out-of-home entertainment.” They never considered a brisk 5K jog around the Rose Bowl, nor open-mike poetry night at many coffeehouses.

And movie popcorn and other snacks are notoriously pricey, which explains why theaters generate roughly 20% of their revenue but 40% of their profit at the concession stand.

Ironically, the high cost of goodies helps moviegoers, according to new research from Stanford University and UC Santa Cruz, because concession revenue enables theaters to keep ticket prices in check. Projector, who only went to a state school, can’t argue with that logic.

There is even some advice for the savvier cinema goer:

Frequent filmgoers can save several hundreds of dollars a year by selecting theaters and showtimes carefully. Sure, the Rolling Stones’ concert movie “Shine a Light” is worth $15 a ticket on a large Imax screen at the AMC CityWalk Stadium 19, but if cash is tight, consider a $5 matinee of whatever is playing at the pleasant-enough, single-screen Vista Theatre in Los Feliz. Some chains also offer bulk ticket discounts, but beware of any restrictions.

If your movie is showing at the mall, you can live dangerously by smuggling in a Mrs. Fields cookie or a packet of sour gummy worms, thereby supporting a broader swath of the economy. Projector, of course, can’t condone such a potentially flagrant violation of theater policy. He’s just sayin’.

Those interested in the Stanford University and UC Santa Cruz concession revenue report can find out more here. From the press release:

The findings empirically answer the age-old question of whether it’s better to charge more for a primary product (in this case, the movie ticket) or a secondary product (the popcorn). Putting the premium on the “frill” items, it turns out, indeed opens up the possibility for price-sensitive people to see films. That means more customers coming to theaters in general, and a nice profit from those who are willing to fork it over for the Gummy Bears.

Indeed, movie exhibition houses rely on concession sales to keep their businesses viable. Although concessions account for only about 20 percent of gross revenues, they represent some 40 percent of theaters’ profits. That’s because while ticket revenues must be shared with movie distributors, 100 percent of concessions go straight into an exhibitor’s coffers.

Although if distributors could decide they would get a share of that revenue and profit as well. Equally interesting is another finding:

In another study examining Spanish theaters, the researchers discovered: Moviegoers who purchase their tickets over the Internet also tend to buy more concession items than those who purchase them at the door, by phone, at kiosks, or at ATMs (the latter option has not yet hit the United States). More research is needed to figure out why, but for now this suggests that theaters may want to be sure to partner with an Internet service to make such ticketing available–or even take the function in-house.

People who come to the movies in groups also tend to buy more popcorn, soda, and candy, Hartmann and Gil found. While this, too, merits more investigation, it may be that such groups comprise families or teenagers. “If that turns out to be the case, it may be that theaters will want to run more family- or adolescent-oriented movies to attract a more concession-buying crowd,” Hartmann says.

No surprise there either that John Fithian is arguing for more PG films. He knows which side his popcorn are butter coated on. Those wishing to download the research paper can find it in PDF form here.