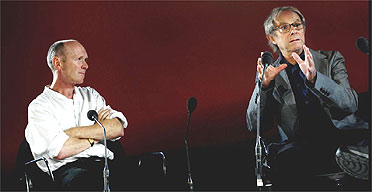 Last week the London’s BFI Southbank (nee, NFT – the National Film Theatre) transmitted a live interview with director Ken Loach and screenwriter Paul Laverty via satellite to nine cinemas across the UK, following a special screening of the pair’s latest film ‘It’s a Free World‘. The event on Thursday 13 September was part of the Guardian Interview series that has been running severla years, but the first time that they had ‘shared’ this event with other cinemas, most of them art-house venues spread across the UK. The event was publicised at the BFI Southbank’s homepage:

The BFI has teamed up with Ken Loach’s Sixteen Films and City Screen in an innovative scheme that will see Loach’s new feature film previewed simultaneously at venues across the UK on Thursday 13 September; it will subsequently air on Channel 4 in late September. Following the special preview screenings of ‘It’s a Free World…’, Loach’s first feature since the Palme d’Or-winning ‘The Wind that Shakes the Barley’, all venues will receive the on-stage Guardian Interview with Ken Loach and writer Paul Laverty via live satellite broadcast.

The event was a straightforward Q&A, the transcript of which you can read here, with a brief acknowledgment at the start and end of the interview that cinema goers from across the UK were following the discussion (“Hello, Belmont Picturehouse, Aberdeen!”). But there were no questions telephoned or texted in from the audiences in the other cinemas. What was the experience like? I was in the worst possible cinema to judge this, as I was in the NFT BFI Southbank itself. So we got Ken Loach in full analogue 3D and saw the cameras and stage managers holding up fingers counting down the number of minutes left until they went off-air. No write ups in news have appeared of the event, though the mostly right wing Englis press usually like to ignore or vilify Loach, so no surprise that they are not hailing him or the BFI for innovative uses of of satellite technology.

No doubt the BFI Southbank have a success on their hands with these types of events. The Guardian Interviews with directors such as Woody Allen and Quentin Tarantino are typically many many time over-subscribed, and that’s just for London (interestingly two cinemas in London screened the interview – Greenwich Picturehouse and Brixton Ritzy). With digital cinema projectors there should also be less of a problem getting copies out to the cinemas even with one-off screening like this (the film will screen on Channel 4 less than two weeks after the BFI screening and be available on DVD not long after). But how big is the market for this type of event beyond the arthouse?

While the event was a first for BFI, it’s far from the first time this has been tried anywhere. BVI, City Screen Picturehouse Cinemas and Arts Alliance Media hosted “the UK’s first interactive multi-site film screening event” with director M Night Shyamalan in August 2004 for ‘The Village‘. The event was a technical and audience success but has tellingly not been repeated by the partners involved, meaning that the pay back might have been limited. Even prior to this Regal/NCM tried something similar with the ‘Red Carpet Premier’ of ‘Maid in Manhattan‘ in December 2002, as well as educational talks with James Cameron for ‘Ghosts of the Abyss‘ and the odd ‘film event’ by the NCM Fathom division (PDF link to list of events). Even priot to this US college campus preview/advertising operation Network Event Theatres Inc (NETS) held regular previews with Cast & Crew Q & A (read the SEC filing describing its operation here), such as this one of ‘Wild Things’. (Amazingly the films were transmitted in HD – definitely not DCI compliant – over satellite prior to their cinema screening and shown for free with a sponsor paying for the cost).

But if this is to take off in a larger way there needs to be more money to be made from Q&As and that can only come from two sources. Either audiences pay a premium to see films with a live Q&A and the premium must be high enough to not just pay for the logistics but for the opportunity cost of the screen-time that would otherwise be used to show a film, or by the distributor who sees publicity value in holding such an event. Judging by the Loach event, not much publicity was squeezed from it. What’s more, Q&As are already widely available. You can get excellent podcasts and even vodcasts for free from BAFTA (the British Academy of Film and TV Arts – see here or search for ‘BAFTA’ on the iTunes store) and most DVDs feature director’s commentaries. I’m not sure how many people listen to these and whether it is the talent’s ego or audience’s demand that drives these.

So just like most films ultimately realize their primary financial value on DVD, so too will these live broadcast Q&As ultimately be most widely seen when they appear as extra matrial on DVDs. Just don’t expect to be able to interact with the DVD by posing questions. It’s a shame that the DVD sale of ‘It’s a Free World’ is taking place so close to the films outing at the BFI Southbank and Channel 4 that there is no time to include it on the DVD.