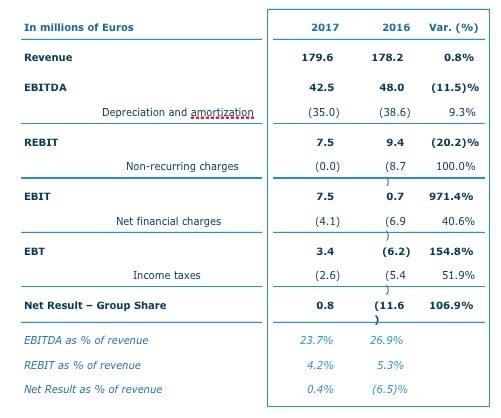 Ymagis Group (FR0011471291, MAGIS, PEA-PME, TECH 40), the European specialist in digital technologies for the cinema industry, today reported its full-year earnings for the 2017 fiscal year, ending 31 December 2017, audited and approved by the Group’s Board of Directors following its meeting on 15 March 2018.

Driven by the full-year integration of acquisitions made in 2016 and by the implementation of the growth strategy based on its services activities, the Eclair and CinemaNext business units saw their revenue increase respectively by +15.4% and +3.4% at €54.8M and €63.3M.

Earnings in 2017 reflected the first results of the Group’s optimisation and consolidation efforts during this first year of the Perform plan, with an improvement in the performances of the Eclair and CinemaNext business units.

Details of the contribution of each business unit to the Group’s performance are shown below:

Against a background of increased investments in Research and Development (R&D) and the drop in VPF business, the consolidated EBITDA decreased by 11.5% to €42.5M, representing 23.7% of the revenue as compared to 26.9% in 2016. It was primarily affected by the sharp increase in payroll-related costs linked to the changes in scope of activities (+14%).  This is due to the change made in the revenue mix, moving from VPF towards the Eclair and CinemaNext activities, which are less capital-intensive but require more human resources. Staff numbers thus increased from 726 employees at the end of 2016 to 768 employees on 31 December 2017. Purchases, primarily concerning the CinemaNext activity, rose by 4.4% in line with the volume of business. Other purchases and external costs remained stable.

Depreciation and amortization fell by 9.3% to €35.0M as compared to €38.6M in 2016 due to VPF-financed digital equipment being almost fully depreciated. The REBIT fell by 20% to €7.5M, also due to the effect of the change in mix.

Net financial charges continued to fall, dropping from -€6.9M to -€4.1M in 2017. The cost of digital equipment financing is in the process of dropping, resulting in a corresponding lowering of the Group’s debts.

The Group’s net earnings significantly improved and became positive again at €0.8M versus a loss of €11.7M the previous year. In 2016, the Group had recorded a net non-recurring charge of €7.9M for the exceptional depreciation of the RBC satellite technology, which had a direct effect on the EBIT and the Group’s net earnings.

The net financial debt amounts to €63.2M, the Group having reimbursed almost €18.8M in debts over the course of the financial year. The leverage ratio (net debt / EBITDA) was therefore 1.5 on 31 December 2017 as compared to 1.6 a year earlier.

Cash flow stood at €15.7M, of which €4.1M is allocated for future repayments of bank loans and leasing contracts linked to the VPF activity. Cash flow remained at the same level as in June 2017, experiencing a significant increase in the working capital requirements of CinemaNext linked to the sustained growth of the activity in Q3 and a reduction in supplier payment deadlines after settlement of all current overdue debts. A plan to rationalise trade receivables in order to reduce payment times by more than 20 days is under deployment and should enable the Group to generate a significantly higher level of cash flow by the end of 2018.

The success of this first year of transformation confirms the relevance of the Group’s strategy focusing primarily on internationalisation and innovation.

For 2018, the Group is continuing its growth and profitability improvement strategy with its sights set on promising commercial developments in Africa and the Middle East where the Group has just opened a new office, the development of the HDR EclairColor technological standard in the United States and recent innovations developed by the Group, including Sphera and EclairGame.

At the centre of this transformation, the Group has developed several service platforms which are boosting the digital transformation of the Eclair business unit and providing customers with innovative, optimised and enhanced solutions for still more added value and economies of scale.

Ymagis is also preparing the launch of a pioneering virtual reality offer in 2018 on its own and in partnership with cinema exhibitors. Virtual reality is a booming global market that is expected to generate $75 billion in revenue in 2021 according to the Greenlight Insights report published in 2017. By providing its technical expertise and original content solutions in a rapidly-growing field, Ymagis remains committed to its role as a catalyst of change to the benefit of its partners.

After achieving the targets set for 2017, Ymagis heads into 2018 with optimism and confirms the targets for its Perform plan for 2020:

Ymagis is an European leader in advanced digital technology services for the cinema industry. Founded in 2007, the Group is headquartered in Paris and has offices in 25 countries with 768 employees. Our core business is structured around three main units:  CinemaNext (exhibitor services: sales and field services, software solutions, customer service/NOC and consulting), Eclair (content services: post-production, theatrical delivery, digital distribution, versioning and accessibility, restoration and preservation) and Virtual Print Fee (VPF) for finance solutions. For more information, please connect to www.ymagis.com, www.cinemanext.com or www.eclair.digital