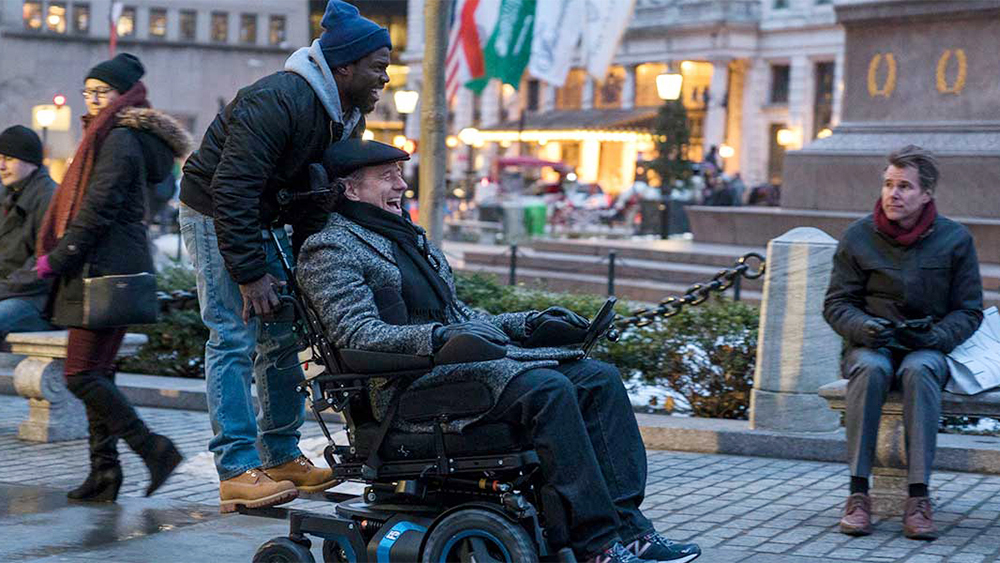 Comedy Is Based on French Hit film "The Intouchables"

STXfilms, a division of Robert Simonds’ STX Entertainment, has partnered with Lantern Entertainment to acquire worldwide distribution rights to “The Upside,” director Neil Burger’s heartfelt comedy about a recently paroled ex-convict (Kevin Hart) who strikes up an unusual and unlikely friendship with a paralyzed billionaire (Bryan Cranston). The film is a sweet spot acquisition for STXfilms fitting the studio’s core model of programming titles with stars in their true signature roles. “The Upside” also stars Nicole Kidman, Julianna Margulies and Aja Naomi King. The announcement was made today by STXfilms Chairman Adam Fogelson, along with Andy Mitchell from Lantern Entertainment.

“This is a hilariously funny and emotionally affecting film. It evokes elements of films like ‘Trading Places’ and Scent of a Woman, while still being completely fresh with characters that are as memorable as they are hysterical,” said Fogelson. “Neil did an incredible job with this comedy and we can’t wait to work with Kevin Hart, Nicole Kidman and Bryan Cranston. We are thrilled to add The Upside to the STXfilms slate and we look forward to working with the team at Lantern Entertainment.”

Lantern’s Andy Mitchell commented, “STX is an ideal distribution partner for this heartwarming film that has universal appeal and features world-class performances. We are grateful for this partnership and look forward to fostering a productive relationship with the entire STX team.”

“The Upside,” written by Jon Hartmere, premiered at the 2017 Toronto International Film Festival. The original French-language version of “The Intouchables” grossed $416 million overseas. Inspired by a true-story, it chronicles an aristocrat (Francois Cluzet) who, after being injured, hires a young man (Omar Sy) from the wrong side of the tracks to be his caretaker.

“The Upside” is an Escape Artists production. Producers are Jason Blumenthal, Todd Black and Steve Tisch.

About STXfilms
STXfilms is a division of STX Entertainment, a global, next-generation media company whose mission is to unlock the value of the direct connection stars have with their fans through the development, financing, production, marketing and distribution of film, television, VR, digital video, music and live entertainment content. It is the industry leader in transforming beyond traditional platform-driven content to creating talent-driven enterprises.

About Lantern Entertainment
Lantern Entertainment, an affiliate of Lantern Capital Partners, is a newly established independent studio entertainment company with a library of over 270 films, with 110 Academy Award nominations and 28 Academy Award wins, that have generated an aggregate worldwide box office in excess of $2 billion, and a television business with hits including the long-running and iconic unscripted series “Project Runway.” The Lantern Entertainment library is home to Best Picture Academy Award winners “The King’s Speech” and “The Artist,” as well as box office hits “Inglourious Basterds,” “Silver Linings Playbook,” “The Hateful Eight,” “Django Unchained.” Lantern Entertainment’s mission is to be one of the preeminent homes for creative talent with an unwavering commitment to content creation and a culture of diverse professionals who operate with the absolute highest level of ethics and standards. Led by Co-Presidents Andy Mitchell and Milos Brajovic, Lantern Entertainment has offices in Los Angeles, New York and Dallas.