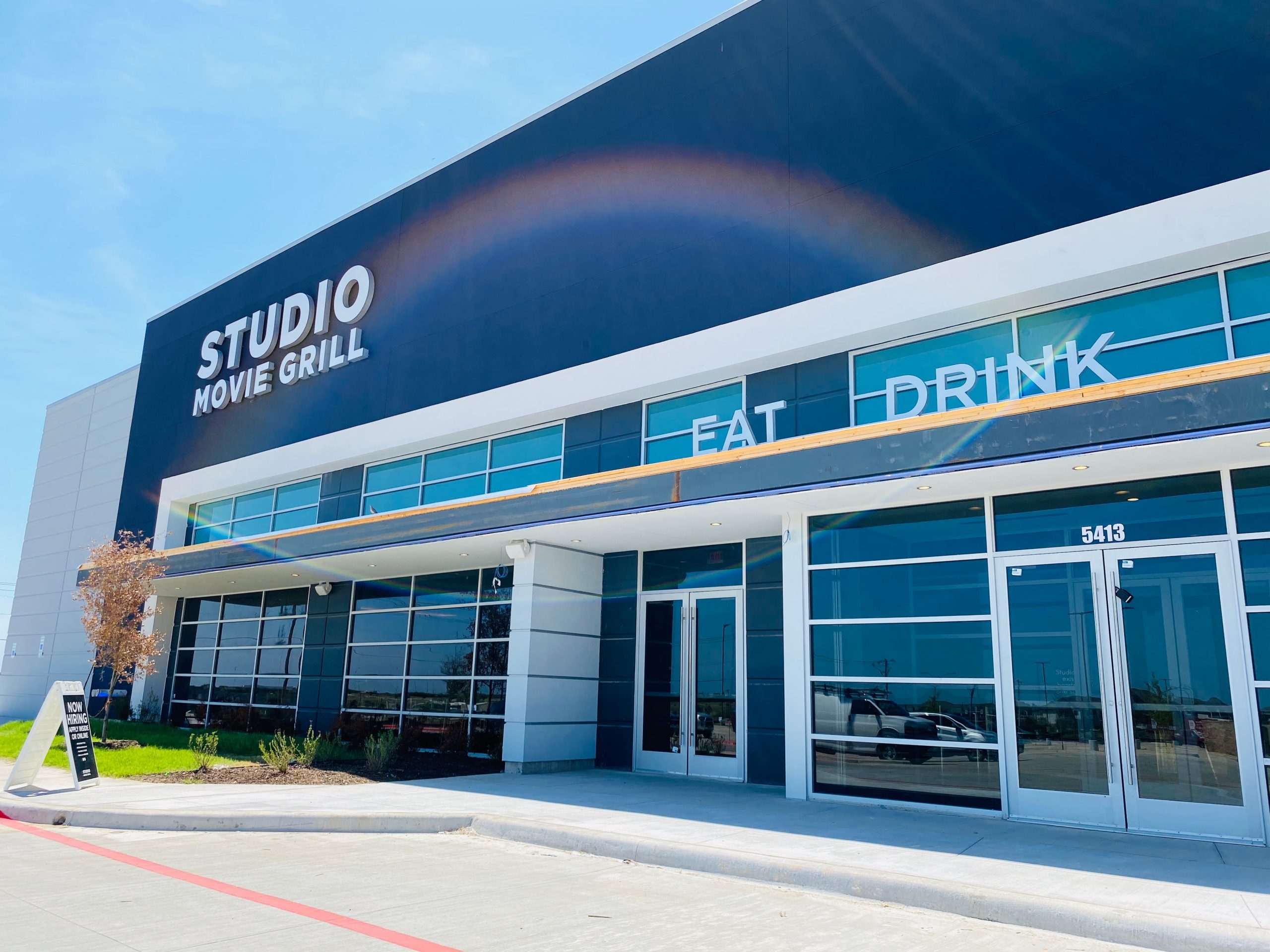 Dallas, TX (August 24, 2020) – Dallas-based Studio Movie Grill (“SMG”), the leader and premier provider of the in-theater dining experience, is officially opening its doors as the anchor for The Shops at Chisholm Trail Ranch in Fort Worth on Friday, August 28th just in time for Warner Bros’ release of the new, highly anticipated Christopher Nolan movie “Tenet”. The Grand Opening of SMG Chisholm Trail marks the company’s first Fort Worth location and 14th location in Texas and will add an additional 12 screens to its current 353 screens operating in 10 states nationwide.

“With the opening of SMG Chisholm Trail, we are excited to open our doors for the first time in Fort Worth and become the anchor for this exciting new development and serve the surrounding area,” said Studio Movie Grill Founder/CEO, Brian Schultz. “We are continually innovating our concept and pride ourselves on offering much more than just the best in movies and full-service in-theater dining; our mission is to open hearts and minds one story at a time and to serve and support our local communities.”

SMG Chisholm Trail is located at 5413 Sierra Springs Lane, Fort Worth, Texas 76123 at the southeast corner of Chisholm Trail Parkway and McPherson Boulevard in Fort Worth. Designed to be a true entertainment destination inside the brand new shopping development, this twelve-screen, 40,000-square foot theater features 1,200 luxury recliners in 12 auditoriums, outfitted with the latest state-of-the-art NEC laser projection, and Q-SYS custom sound systems to ensure the most comfortable and technologically advanced cinematic experience available.

“On behalf of the City, I’d like to congratulate Studio Movie Grill on opening its first location in Fort Worth,” said Jungus Jordan, Mayor Pro Tem and Fort Worth City Councilman. Further touting, The Shops at Chisholm Trail Ranch’s anchor tenant is a great addition to our great city!  Not only is it a wonderful entertainment venue but it will also aid in driving traffic to the shopping center.  As a luxury movie theatre, Studio Movie Grill should quickly help to invigorate the area, by increasing amenities and offering guests safe, full-service dining options.”

Health and safety continue to be a top priority for the exhibitor. All touch points meet or exceed current guidance from the CDC, including stringent cleaning and sanitization protocols. Locations will operate at 50% capacity with social distancing technology built into the ticket reservation systems. Full details can be found here studiomoviegrill.com/story/reopen.

SMG attributes much of its success to new initiatives, new technologies, and the continued loyalty from SMG Access members. The company has developed and prioritized new technologies to allow for automated, contactless purchasing and guests are encouraged to buy their tickets and purchase food online using the SMG App or self-service kiosks.

Advanced Early Access tickets for the long-awaited “Tenet” from Warner Bros for August 31, September 1 & 2 are now on sale for the movie starring John David Washington, Robert Pattinson, and Elizabeth Debicki by clicking HERE. Tickets for the wide release will be announced soon. In anticipation of the much-heralded release of Christopher Nolan’s film, SMG will show his revolutionary blockbuster “Inception”, which features an exclusive behind-the-scenes look at “Tenet”. Opening weekend of SMG Chisholm Trail will also be marked by Disney’s “The New Mutants”, which opens August 28.

In gratitude for their loyalty, SMG is offering exclusive SMG Access member perks like $5 Ticket Tuesdays and Access points on all food and beverage purchases, excluding alcohol. Access membership account is free and exclusive offers from SMG will be available by logging in the SMG App or self-service kiosks. SMG’s goal is to be the best place to watch a movie with simple and safe ways to enjoy the show.

About Studio Movie Grill
Conceived in 1993, Studio Movie Grill (“SMG”) modernized the traditional movie-going experience by combining first-run movies with full-service, in-theater dining. SMG has swiftly grown to 353 screens in 10 states. SMG was named to Inc. Magazine’s List of “Fastest Growing Private Companies” three years in a row, placed 11th in Box Office Magazine’s Giants of the Industry and, in 2019, 50 films put SMG in the top 10 at the Box Office with key titles grossing as high as #5 in box office receipts. Honoring its commitment to Opening Hearts and Minds, One Story at a Time, SMG’s legacy programs include Special Needs Screenings, Chefs for Children program and annual Opening Hearts & Minds Award, which strive to help families and acknowledge local heroes. In June 2018, SMG created a unique loyalty program, SMG Access which, as loyal guests earn rewards, allows them to join SMG in offering movies and meals to underserved community members. To date, this program has earned over 44,000 movies and meals.  For additional information, visit studiomoviegrill.com