Student Awards Presented by the American Society of Cinematographers 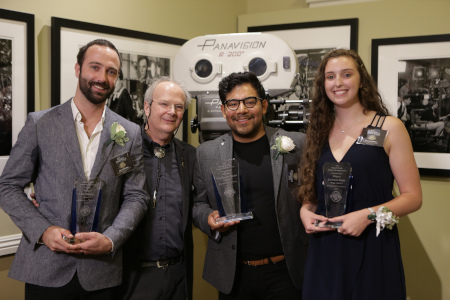 The American Society of Cinematographers (ASC) announced this year’s Student Heritage Award winners at an event at the ASC Clubhouse in Hollywood on October 12. Three student filmmakers were chosen from 12 nominees for demonstrating exceptional cinematography skills in their submitted work. The 2019 winners are:

“After watching the nominees’ work, it’s exciting to see how the next generation of filmmakers visually interprets scripts for the screen,” says ASC President Kees van Oostrum. “Our winners took a genuine approach to telling stories that evoked a range of emotions, impressing the jury of ASC members. Their mastery of the art and craft of cinematography is inspiring and bodes well for the future of entertainment.”

Numerous past ASC Student Heritage Awardees have gone on to successful careers in filmmaking and several are now ASC members themselves, including Nelson Cragg, Masanobu Takayanagi, and Lisa Wiegand.