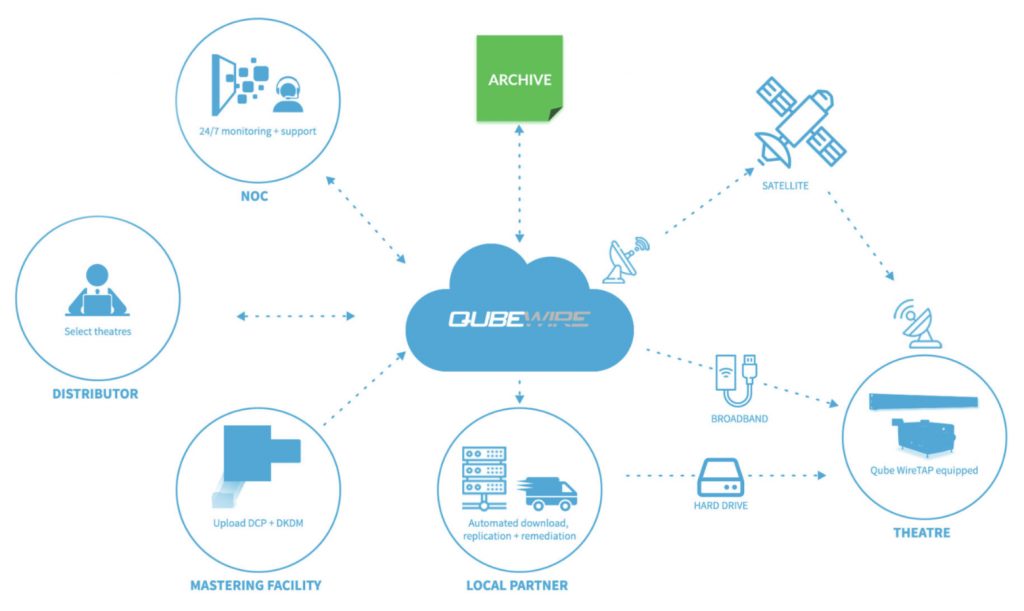 Qube Cinema, a leading digital cinema technology and solutions provider, announced the publication of a case study highlighting the deployment of Qube Wire by Tugg, a pioneer in developing the Cinema On Demand model bridging the gap between filmmakers and audiences. The case study was published in conjunction with the Art House Convergence Conference which takes place between January 21st -24th in Midway, Utah. The case study can be downloaded from Qube Cinema’s website – www.qubecinema.com.

In 2011,Nicolas Gonda and Pablo Gonzalez launched Tugg as a platform that allows filmmakers, content owners, promoters and even moviegoers, to program films to play in movie theatres and community venues throughout the United States.

Tugg has the ability to book titles into over 85% of commercial movie theatre screens in the US, from the largest circuits to independent art houses. One noteworthy aspect of the Tugg platform is that it also provides access to venues that potentially wouldn’t ordinarily play a film, such as churches, museums and libraries.

Tugg could not identify a cost-effective solutions provider that could meet their content service requirements. Satellite distribution was great at delivering to thousands of screens, but not just 10, and those providers that could do a limited distribution were unable to accommodate a larger one. In most instances Tugg was forced to fulfill all aspects of physical distribution in-house; from the electronic storage of film titles, to the replication of hard drives, to shipment of those drives, to making certain the content arrived and could be played back properly.

The operational logistics of distributing content for its screenings and events were costly, time consuming and onerous enough to prevent Tugg from expanding internationally.

What Tugg needed was a partner that could cater to their flexible content service needs while meeting two critical factors; low-cost and a wide distribution footprint. If outsourcing their content operations were too costly, the number of screenings Tugg could successfully promote would decline to a point where it would ultimately kill the business. While Tugg found a number of providers with reasonable pricing, they were restricted in their distribution by either geography or to theatre sites that had proprietary hardware installed.

With its Qube Wire solution, Qube Cinema was able to accommodate both Tugg’s economic model and its broad distribution spread no matter how big or small the release. A hybrid solution that utilizes physical, electronic and satellite delivery, Qube Wire can distribute Tugg’s content to both theatres with Qube’ s hardware installed as well as those outside of its own network.

For a company running as lean as Tugg does, handing over their entire logistical operation to a third party was not an easy decision. They wanted to be comfortable and make sure everything went smoothly when delegating a process as integral to their company as content distribution. Now, nine months after abandoning their internal logistics and distribution operations, Tugg has programmed over 600 screenings through Qube Wire for 24 different titles.

Tugg’s adoption of Qube Wire and their continued use of the system has been trouble free according to Pablo Gonzalez the company’s co-founder and chief executive officer. “I can’t think of a single major hiccup because they brought more experience in film delivery logistics than we had,” said Gonzalez in recounting the experience of making the switch. “They really brought a higher level of competence to something that we were doing internally very well, but at great pain.”

The Qube Wire service is now available across 134 countries. The territories where Qube Wire content delivery services are now available includes all major regions of the world including developing and mature markets, from Southeast Asia to Africa to Europe and the Americas. Qube Wire can already deliver content to 95% of theatres worldwide outside of mainland China.

About Qube Wire
Qube Wire is a web-based service for global theatrical distribution. With a simple but comprehensive user interface, distributors can manage their digital cinema assets, assign territorial rights for their content and have their Digital Cinema Packages (DCPs) and keys (aka Key Delivery Messages or KDMs) delivered to movie theatres throughout the world. Theatres can manage their own digital cinema device details, provide KDM providers a standards-compliant FLMx data feed and access their Universal Inbox on the Qube Wire service, all for free.
To sign up for the Qube Wire service, visit www.qubewire.com

About Qube Cinema
Qube Cinema, Inc. is a provider of end-to-end digital cinema technology and solutions. The company draws on decades of experience in cinema and provides a seamless digital environment for exhibitors, filmmakers and post-production companies with DCI compliant products that are flexible, reliable and cost-effective.
For further information, visit www.qubecinema.com