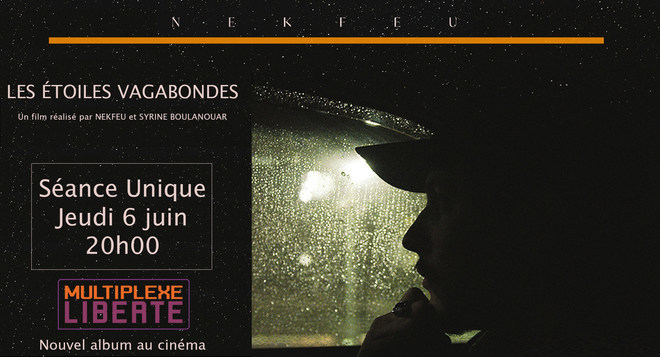 For a One-night Only Musical Documentary in French Cinemas

The film “THE WANDERING STARS – The New Album in Cinema” (LES ETOILES VAGABONDES – Nouvel album au cinéma) directed by Nekfeu and Syrine Boulanouar, produced by Mars Film, Full Dawa Films and Lieurac Productions, brought together 100,000 fans for a total €1 Million Box-Office yesterday Thursday 6 June for a one-night and one-screening only event. It was released on the same evening by Pathé Live in France, Belgium, Switzerland, Luxembourg, Morocco and Canada across 189 movie theatres.

The documentary follows the steps of major French rap artist Nekfeu through the travels and encounters that fueled the creation process of his new album released at the end of the screening.

The film established an absolute record for the one-evening release of a musical documentary with 91,100 admissions in France only, ahead of previous record holder “Burn The Stage” following South Korean band BTS behind-thescenes of their Wings Tour with 30,851 admissions in November 2018 (also distributed by Pathé Live for Trafalgar Releasing in France).

With only one show, THE WANDERING STARS ranked #1 at the French daily box-office ahead of X-MEN: Dark Phoenix (released nationwide the day before)