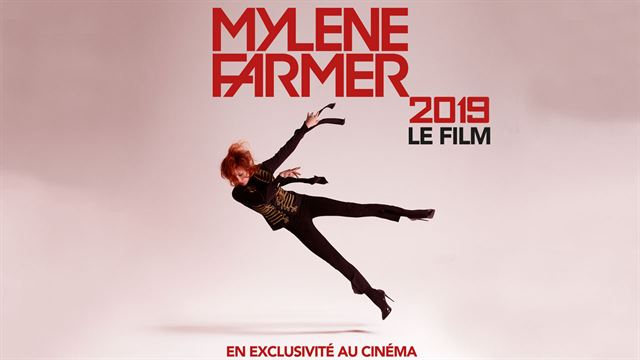 London (July 1, 2019) – Dolby Laboratories, Inc., and Pathé Live today announced that they will offer fans of renowned French artist Mylène Farmer the opportunity to see her concerts in Dolby Cinema® and Dolby Atmos® screens in France, and in Dolby Atmos screens across Belgium, Switzerland, Canada and Russia for a one night only event in cinemas on November 7th this year.

This is the first time a full concert mixed in Dolby Atmos and graded in Dolby Vision will be shown to audiences in Dolby Cinema. All 10 Dolby Cinema screens across France are set to screen the iconic artist’s performances at the Paris La Défense Arena in Nanterre filmed during her residency from June 7 to 22, putting cinema audiences at the heart of the concert experience.

The monumental show, filmed by François Hanss will be screened in all ‘Les Cinémas Pathé Gaumont’ Dolby Cinema and Dolby Atmos screens in France as well as in Dolby Atmos auditoriums from independent cinemas in France and other territories.

Les Cinémas Pathé Gaumont* is the Dolby Cinema partner in France with a number of sites including Pathé Beaugrenelle in Paris. As Dolby’s most advanced cinema offering, Dolby Cinema enables a much richer experience through the Dolby Vision projection system and the Dolby Atmos sound system. The combination of Dolby technologies with the design and comfort of Dolby Cinema makes audiences feel closer to the onscreen action than ever before.

“To turn this experience into a Dolby Cinema movie, the content from the capture will be mixed in post-production. We are remixing the sound of Mylene Farmer’s concert in Dolby Atmos and it will also be graded in Dolby Vision. As a result, anyone who comes to see the exclusive screening of the film will be able to live the concert as if they were there: the sensations will be multiplied, and the fans will be immersed and transported into the world of Mylène Farmer. This is a world premiere, no other concert has been graded in Dolby Vision and mixed in Dolby Atmos and shown in a Dolby Cinema”, said Julian Stanford, Director Dolby Cinema Europe.

Fans of one of France’s biggest selling female artists will also be able to enjoy the sound of “Désenchantée” and “California” in more than 40 auditoriums equipped with Dolby Atmos.

Dolby Atmos is a preferred format for preserving the fidelity and quality of sound. From mixing to playing, Dolby Atmos offers the best audio experience available.

A pioneer and leader in the broadcast of major cultural events live in cinema, Pathé Live offers the opportunity to all to discover the great classics of opera, ballet and theatre, but also of concerts, shows and other cultural events.

“Mylène Farmer’s previous concert, TIMELESS 2013 – THE FILM, was shown in cinemas in March 2014 and brought together 94,000 fans in France (101,120 in total including Belgium and Switzerland) in one evening. A record of the greatest number of admissions for a concert screened in a cinema in a single session! We hope to break this record this year by offering a more immersive experience to the fans thanks to Dolby Cinema and other auditoriums equipped with Dolby Atmos,” explains Thierry Fontaine, President and CEO of Pathé Live.

About Dolby Laboratories
Dolby Laboratories (NYSE: DLB) is based in San Francisco with offices in over 20 countries around the globe. Dolby transforms the science of sight and sound into spectacular experiences. Through innovative research and engineering, we create breakthrough experiences for billions of people worldwide through a collaborative ecosystem spanning artists, businesses, and consumers. The experiences people have – with Dolby Cinema, Dolby Vision, Dolby Atmos,Dolby Voice, Dolby Dimension, and Dolby Audio – revolutionize entertainment and communications at the cinema, on the go, in the home, and at work.

Dolby, Dolby Atmos, Dolby Audio, Dolby Cinema, Dolby Dimension, Dolby Vision, Dolby Voice, and the double-D symbol are among the registered and unregistered trademarks of Dolby Laboratories, Inc. in the United States and/or other countries. Other trademarks remain the property of their respective owners.

Pathé Live distributes a wide variety of content such as operas, ballets, rock and pop concerts to cinemas worldwide, including BTS’s latest concert LOVE YOURSELF IN SEOUL. This event was released in over 4,500 cinemas in 107 territories for a one-day only event on January 26 this year. This is the largest event cinema release ever. It drew 1.2 million fans (1.6 million in total including an encore) across the World. Pathé Live holds the record for the biggest worldwide one-day box office ever for a cinema event. Pathé Live is the exclusive producer and the worldwide distributor of the Bolshoi Ballet in Cinema Season (1,700 cinemas / 70 territories) and French National Theatre (Comédie-Française) cinema series, live from Moscow and Paris.