Nick Mason’s “Saucerful Of Secrets: Live At The Roundhouse” – Exclusive screenings coming to cinemas in selected cities worldwide on 10 March 2020 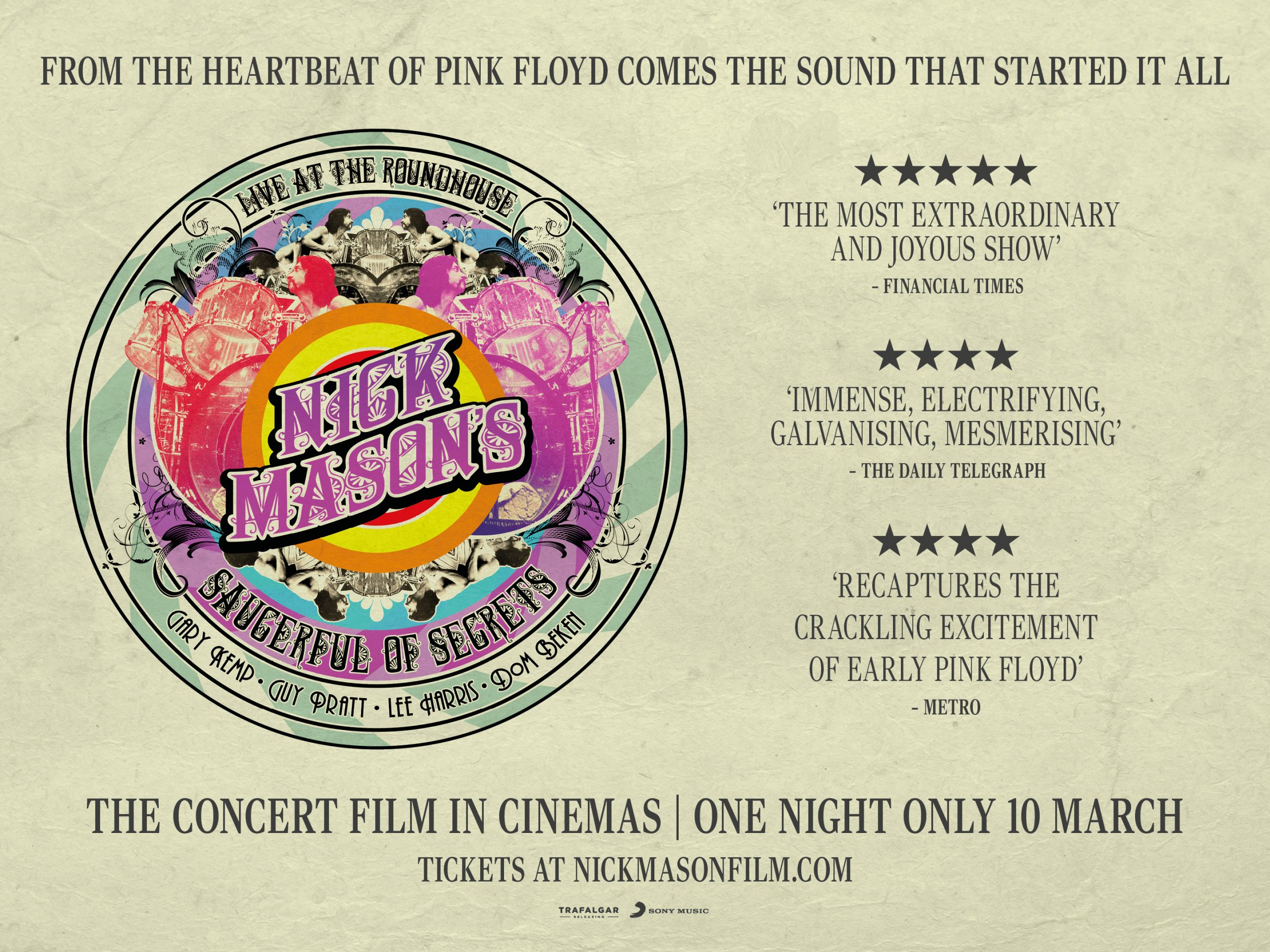 London, UK (January 30, 2020) – ‘Nick Mason’s Saucerful Of Secrets: Live At The Roundhouse’ is a live recording taken from the band’s sold-out shows at the legendary London venue in May 2019. Receiving huge acclaim throughout their first tour, “Live At The Roundhouse” captures the true essence of a band reviving the music that had rarely featured in Pink Floyd’s live shows since those early days and some of the songs were never played at all by Floyd.

Released on 17 April 2020 through Sony Records, it is available as a double-CD/DVD package, double-vinyl and on Blu-ray and can be pre-ordered at https://smarturl.it/NMSOS. On all pre-orders, the Saucers version of ‘Fearless’ will be made available instantly.

In collaboration with Trafalgar Releasing and Sony Music Entertainment, ‘Nick Mason’s Saucerful Of Secrets Live At The Roundhouse’ will be coming to cinemas in selected cities worldwide for one night only on 10 March 2020. This theatrical event will also include a pre-recorded cinema exclusive Q&A with Nick Mason and the band where they will answer questions submitted by fans. Tickets are on sale now from NickMasonFilm.com.

Watch the trailer at https://smarturl.it/NMSOS_Trailer

Nick Mason, Gary Kemp, Guy Pratt, Lee Harris and Dom Beken, aka Nick Mason’s Saucerful Of Secrets, came together with the simple idea of playing some early Pink Floyd – the songs pre ‘Dark Side Of The Moon’ – that had not been given a live outing for decades! This was the first time Nick had played live since Live 8 in 2005! “Why don’t we get a rehearsal room and play some things and see how we feel about it?” Nick suggested…

A few months later, on Sunday 20 May 2018, Nick Mason’s Saucerful Of Secrets took Pink Floyd’s drummer back to the clubs for the first time since 1967 – Dingwalls in Camden, London. The performance was met with huge adulation across the board**.

Three nights at the Half Moon in Putney followed that same week before announcing a theatre tour through the UK, North America and Europe from September, and they promptly sold out! A handful of extra UK shows were announced for April and May 2019, including two nights at The Roundhouse – the venue where Pink Floyd first played on 15 October 1966, at the International Times launch party.

‘Nick Mason’s Saucerful Of Secrets Live At The Roundhouse’ captures the excitement that hasn’t diminished since that first show at Dingwalls. Recorded almost a year to the day and just a few hundred yards from that first show, you can hear a band playing with joy and passion, with power and restraint. From the garage band attack of Arnold Layne and Vegetable Man to the psychedelic journeying of Interstellar Overdrive, and the mellow, spacey Floyd of Atom Heart Mother and Green Is the Colour, Nick Mason’s Saucerful of Secrets sounds like a band in the moment and thrilled to be reviving music that had rarely featured in Floyd live shows since those early days.

Pre-orders are available now at https://smarturl.it/NMSOS

With an expanded repertoire, tickets are on sale now for their 2020 UK and European tour at www.thesaucerfulofsecrets.com.

Green Is The Colour

Let There Be More Light

Set The Controls For The Heart Of The Sun

One Of These Days

A Saucerful Of Secrets

Point Me At The Sky