“BTS: Yet to Come” in Cinemas Screening Worldwide Beginning February 1st for a Limited Time Only 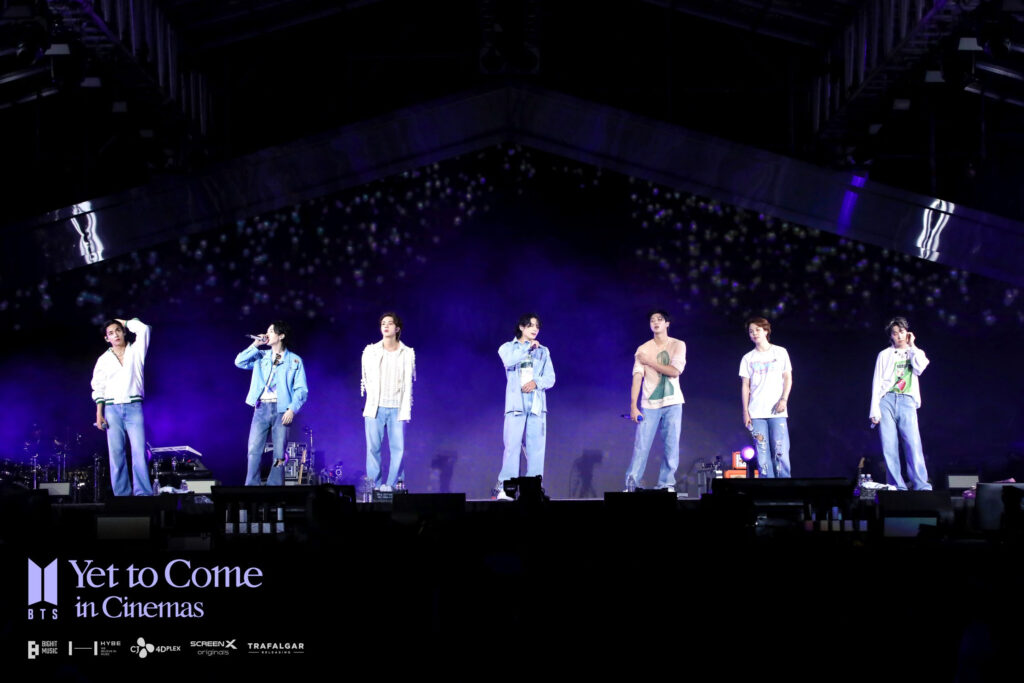 In February 2023, experience BTS’ latest concert “BTS: Yet To Come” in BUSAN in cinemas worldwide with “BTS: Yet To Come in Cinemas”. This special cinematic cut, re-edited and remixed for the big screen, features new close-up angles and a whole new view of the entire concert. Recorded in front of a massive sold-out crowd in Busan, South Korea, in October, cinema audiences will watch the group’s RM, Jin, SUGA, j-hope, Jimin, V, and Jung Kook perform career-spanning hit songs, including “Dynamite,” “Butter,” and “IDOL,” plus the first concert performance of “Run BTS” from the group’s latest album Proof.

“”BTS: Yet To Come in Cinemas” will be presented by HYBE, Trafalgar Releasing, and CJ 4DPlex in theaters globally from Wed. Feb. 1 for a limited time across 110+ countries/territories. Screenings on Sat. Feb. 4 will be dedicated to “Light Stick Screenings,” where audiences can celebrate using the band’s signature illuminated merchandise.

Tickets will be on sale at www.btsyettocomeincinemas.com beginning Wed., Jan. 10 at 4pm PST / 7pm EST and on Thurs., Jan. 11 at 9am KST / 12am GMT / 1am CET. Up-to-date ticketing and exhibiting cinema information will be available at the official film website.

In addition to standard cinema formatting, “BTS: Yet To Come in Cinemas” will be released in various special formats, including the immersive 270-degree field of view of ScreenX; 4DX, where the effects reproduce the live atmosphere of the concert; and 4DX Screen, a combination of ScreenX and 4DX.

Marc Allenby, CEO of Trafalgar Releasing said, “We look forward to collaborating once again with the teams at CJ 4DPlex, and HYBE to bring BTS’ awe-inspiring Busan concert to the big screen in this special cinematic cut. The group’s engagement with audiences has always been perfectly suited to the cinema, and we are excited to welcome fans from all corners of the globe to this must-see celebration.”

Jong Ryeol Kim, CEO of CJ 4DPLEX said, “We are thrilled to announce our second ScreenX collaboration and first 4DX, 4DXScreeen collaboration with BTS. This film is made for both special formats, which fans can experience our movie completely through enlarged screens with 3 different angles and moving motion seats aligning to BTS’s music.”

About HYBE
HYBE, rebranded from Big Hit Entertainment in March 2021, is a global entertainment lifestyle platform company that seeks boundless expansion in order to innovate the music industry. Ever since, HYBE has been expanding its multi label system including BIGHIT MUSIC, BELIFT LAB, SOURCE MUSIC, PLEDIS Entertainment, KOZ ENTERTAINMENT, ADOR, HYBE LABELS JAPAN, while HYBE AMERICA also manages its affiliate labels including Big Machine Label Group. In addition to the label business, HYBE established an integrated structure with its solution business that creates concert, video content, game, original story and retail, as well as a platform business through Weverse, a global fandom platform. Composed of its three headquarters based in Korea, Japan and the US, the company works towards bringing innovative change throughout the global music industry.

About Trafalgar Releasing
Trafalgar Releasing, the global leader in event cinema distribution, harnesses the power of cinema to bring fans together in more than 13,000 locations in 132 countries worldwide. A subsidiary of Trafalgar Entertainment, Trafalgar Releasing’s worldwide operations include production, acquisition, marketing, and distribution of live or pre-recorded content to cinemas led by an international team of specialists. Featuring live concerts, music documentaries, world-class opera, award-winning theatre, and more from the leading names in entertainment such as BTS, Metallica, Oasis, Coldplay, Billy Joel, George Michael, Twenty One Pilots, the Royal Opera House and more, Trafalgar Releasing has shattered event cinema box office records, most recently with the BTS Permission to Dance on Stage – Seoul: Live Viewing concert which grossed more than $32.6M at the global box office. More information about Trafalgar Releasing can be found at www.trafalgar-releasing.com.

About CJ 4DPlex
CJ 4DPlex is a leading, next-generation cinema technology company, headquartered in Seoul with international offices in Los Angeles and Beijing. The company has created immersive film technologies for theaters worldwide that include ‘4DX’, ‘ScreenX’ and ‘4DX Screen’ for consumers to experience films in ways that were never before possible.

About ScreenX
ScreenX is the world’s first multi-projection cinema with an immersive 270 degree field of view. By expanding the image beyond the frame and onto the walls of the theatre, ScreenX places the audience directly at the center of the story, creating a visually immersive viewing experience unlike any other. To date, there are over 358 ScreenX auditoriums including 4DX Screen around the world in 38 countries. More than 77 Hollywood and local titles have been shown in ScreenX, and 11 ScreenX original contents have been screened on more than 4,000 screens all around the world. ScreenX was recognized as the “Innovator of the Year” at ShowEast 2018. For more information, please visit www.screenxmovies.com.

About 4DX
4DX provides moviegoers with an exciting, multi-sensory experience, allowing the audience to connect with movies through motion, vibration, water, wind, snow, lightning, scents, and other special effects that enhance the visuals on-screen. Each 4DX auditorium incorporates motion-based seating synchronized with 21 different effects and optimized by a team of skilled 4DX producers, maximizing the excitement of the movie, beyond the limits of audio and video. More than 978 Hollywood and local titles have been screened in 4DX. To date, more than 90,000 4DX seats operate in 788 auditoriums, spanning 69 countries. For more information, please visit www.cj4dx.com.