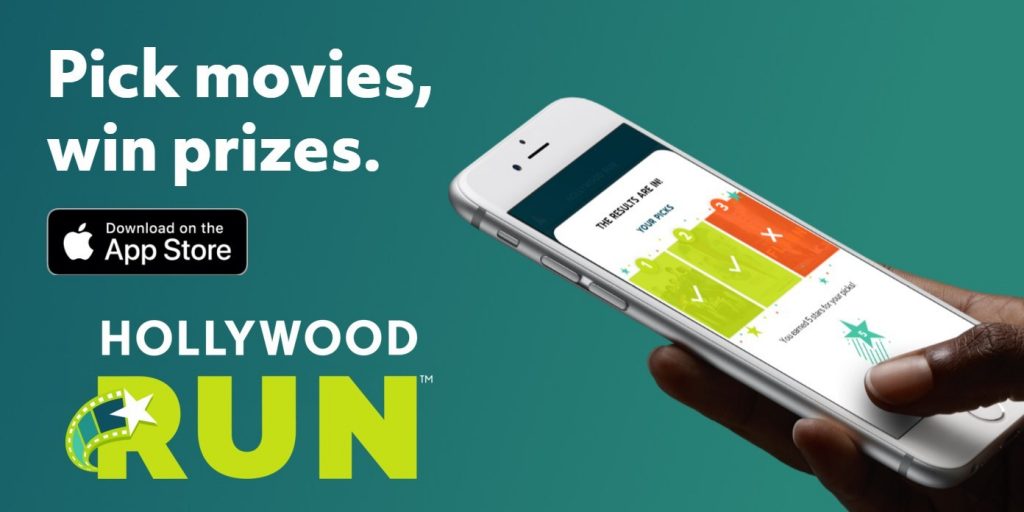 Hollywood Run is now available through the Apple Store.

The free (IOS) app, which is unlike any other movie-centric app, unlocks a participant’s knowledge of movies and pop culture and offers rewards and prizes including cash, movie tickets, movie popcorn and entry into the grand prize, the Red Carpet sweepstakes. In fact, during July participants will compete to win $500 cash.

Hollywood Run Is Educational
Created with the 210 million self-proclaimed movie enthusiasts in mind, the Hollywood Run mobile app offers players a fun, user-friendly and rewarding experience while educating players about the weekend’s movie releases”, according to Brad Derusseau, Hollywood Run’s managing principal/founder. The core experience allows players to rank the three movies that he or she believes will generate the highest gross box office revenue each weekend (Fri.-Sun.). As many as 10 Stars are awarded based on the correct selection of the top three movies and additional stars are awarded daily for activities such as watching a trailer or answering movie trivia. For every 25 stars earned, a player receives a digital scratch-off award to win popcorn, movie tickets or entry into a Red Carpet Sweepstakes.

Monthly, seasonal and annual cash contests are also featured. Players compete for the cash contests by earning the most stars, most runs (correctly picking the top 3 any given weekend) or longest streak during the designated promotional periods.  Movie enthusiasts can immediately put their skills to work by ranking some of the fall’s big releases: “Joker,” “Gemini Man,”  “Charlie’s Angels,” “Terminator: Dark Fate,” “Frozen II.”

Derusseau explains the premise behind Hollywood Run:  “While at parties or social events, I began to realize that people were asking, ‘what TV series are you currently watching’ instead of ‘have you seen any good movies lately.’ With the exception of the heavily promoted blockbuster films, people are generally unaware that four to five new movies are released every weekend. By making a game of the box office results, my intent for Hollywood Run is to assist the industry by bringing the conversation back to these great movies.”

Other reasons behind the app’s creation (in addition to the 210 million movie enthusiasts):

To learn more about Hollywood Run, visit:  https://hollywood.run.  Or check out the Facebook page:  https://www.facebook.com/hollywoodrun.movies

More about founder Brad Derusseau
Brad Derusseau is the Senior VP of Exhibitor Relations of TrailerVote. Plans are underway to incorporate TrailerVote’s patent-pending trailer insights technology into Hollywood Run.  He is a A 17-year motion picture industry veteran, who co-founded PMG Media in 2002 and Cinema Scene Marketing and Promotions in 2005.  Derusseau gained a proven track record of building companies designed to drive awareness for new release films.  This was accomplished through branded physical media and through the development of place-based digital media networks (e.g., TrailerVision, Story Wall).  Derusseau started his career in the telecommunication industry with Sprint, performing international relations and consumer marketing duties during a 13-year tenure.