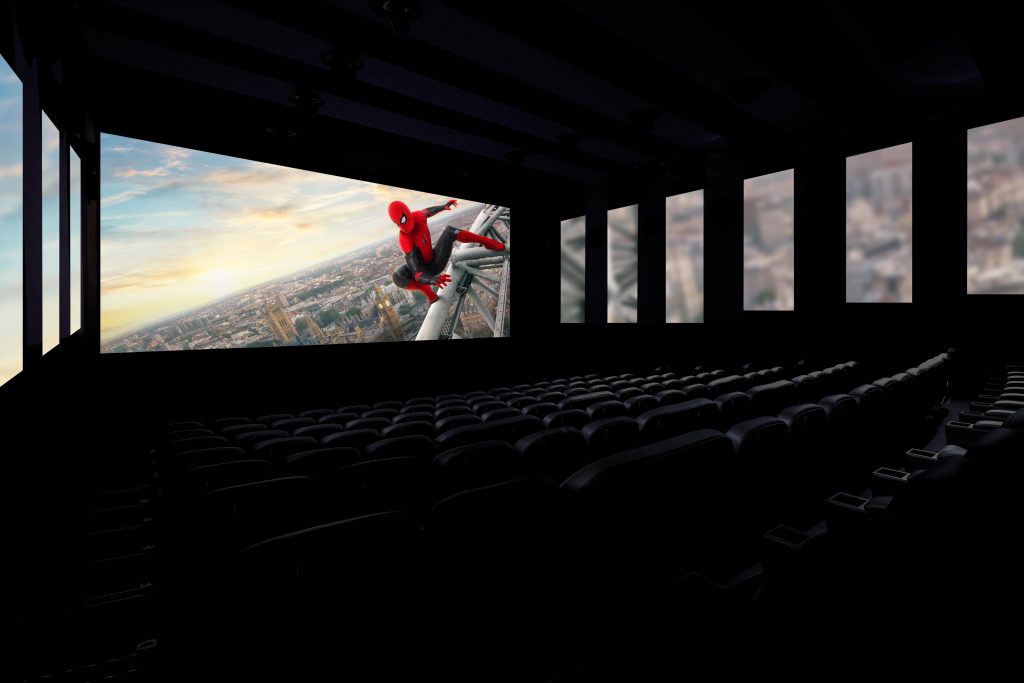 ICE Theaters, one of France’s most successful premium large formats, announced today that Sony Pictures’ “Jumanji: The Next Level” will be the first film shown in the U.S. utilizing the ICE Theaters format with ICE Immersive technology.

A culmination of collaborations between the cinema format and AEG, owners of L.A. Live, the country’s first ICE Theaters location will open to the public in December at Regal L.A. Live: A Barco Innovation Center in downtown Los Angeles. Following a special ICE Theaters premiere on December 10, the highly-anticipated film will be available in the premium format on opening day, the evening of December 12, bringing a new immersive moviegoer experience to movie fans in Los Angeles.

“Experiencing films in the ICE Theaters format brings a unique and exciting cinematic experience to get movie fans out of the home and into the theater,” said Scott Sherr, EVP, Worldwide Theatrical Distribution, Sony Pictures Entertainment’s Motion Picture Group.  “We’re excited to give consumers a choice to see ‘Jumanji: The Next Level’ in this compelling way only in theaters.”

“We are thrilled to be the first movie theater in America to introduce the immersive ICE Theaters technology,and that our L.A. Live moviegoers will be the first in the country to have this one-of-a-kind movie experience,” said Shelby Russell, Sr. Vice President of L.A. Live Marketing and Cinemas.

The ICE Theaters concept launched three years ago, combining state-of-the-art design and excellence in sound and image technologies with the revolutionary ICE Immersive sensorial experience. ICE Immersive technology features non-reflecting LED panels flanking each side of the auditorium to fill the moviegoers’ peripheral vision and complement the feature film being showcased on the front screen. The in-house ICE Theaters post-production team in La Rochelle creates the custom, ambient images shown on the panels, and syncs them to each film. The first Hollywood blockbuster to be screened in this format in 2017 was Sony Pictures Entertainment’s “Jumanji: Welcome to the Jungle.” In addition to the ICE Immersive LED panels, each ICE Theaters location features luxury seats, superior immersive sound and RGB laser projection, along with the ICE Immersive experience with LED panels on the side walls.

The ICE Theaters concept comes to the U.S. after seeing great success in France with 35 ICE Theaters auditoriums. In fact, when comparing a standard auditorium to an ICE Theaters one, the immersive premium large format saw box office revenue double the standard screen. CGR Cinemas, the exhibitor originally behind ICE Theaters, is one of the leading cinema chains in France.

This Los Angeles location, in partnership with AEG, is the first ICE Theaters to open outside of France, as part of an overall, global expansion strategy. Earlier this year, it was announced that the format is coming to the Middle East and Northern Africa via a deal with VOX Cinemas.

In “Jumanji: The Next Level,” the gang is back but the game has changed. As they return to Jumanji to rescue one of their own, they discover that nothing is as they expect. The players will have to brave parts unknown and unexplored, from the arid deserts to the snowy mountains, in order to escape the world’s most dangerous game.

About ICE Theaters
The ICE (“Immersive Cinema Experience”) Theaters concept launched three years ago, combining state-of-the-art design and excellence in sound and image technologies with the revolutionary ICE Immersive sensorial experience.  ICE Immersive technology features five non-reflecting LED-panels flanking each side of the auditorium to fill the moviegoer’s peripheral vision with colors complementary to the front screen.  An in-house post-production team in La Rochelle creates ambient images for the panels and syncs them to each film showcased using this technology.

The ICE Theaters format begins its international expansion after seeing great success in France where there are 32 locations. Each ICE Theaters location features luxury seats, Superior Immersive Sound and RGB laser projection, along with the ICE Immersive experience with LED panels on the side walls.

About AEG
Headquartered in Los Angeles, California, AEG is the world’s leading sports and live entertainment company. The company operates in the following business segments: Facilities, which through its affiliation with ASM Global, owns, manages or consults with more than 300 preeminent arenas, stadiums, convention centers and performing arts venues around the world; Music through AEG Presents, which is dedicated to all aspects of live contemporary music performances, including producing and promoting global and regional concert tours, music and special events and world-renowned festivals such as the Coachella Valley Music and Arts Festival; Real Estate, which develops world-class venues, as well as major sports and entertainment districts like Staples Center and L.A. Live, Mercedes Platz in Berlin and The O2 in London; Sports, as the world’s largest operator of high-profile sporting events and sports franchises including the LA Kings, LA Galaxy and Eisbären Berlin; and Global Partnerships, which oversees worldwide sales and servicing of sponsorships including naming rights, premium seating and other strategic partnerships. Through its worldwide network of venues, portfolio of powerful sports and music brands and its integrated entertainment districts, AEG entertains more than 160 million guests annually. More information about AEG can be found at www.aegworldwide.com.