First Ice Theater Coming to the U.S. Through New Partnership Between AEG and CGR Cinemas 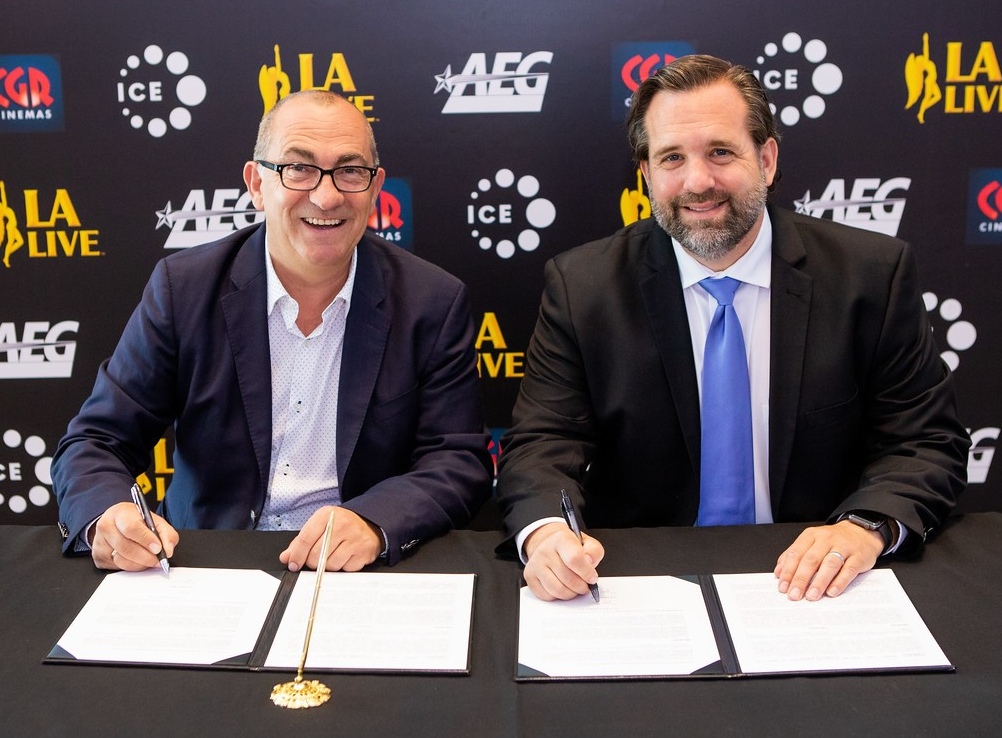 Through a partnership between CGR and AEG, France’s most successful premium large format, ICE THEATER featuring ICE IMMERSIVE technology, will be debuting this fall in a dedicated theater within the Regal L.A. LIVE in downtown Los Angeles. The first U.S. blockbuster to be screened at an ICE THEATER with ICE IMMERSIVE technology will be announced in the coming months.

The ICE (“Immersive Cinema Experience”) THEATER concept launched two-and-a-half years ago, combining state-of-the-art design and excellence in sound and image technologies with the revolutionary ICE IMMERSIVE sensorial experience. ICE IMMERSIVE technology features five non-reflecting LED-panels flanking each side of the auditorium to fill the moviegoer’s peripheral vision with complementary colors from the front screen. CGR’s in-house post-production team in La Rochelle creates ambient images for the panels and syncs them to each film showcased using this technology.

“Entering the U.S. market and doing so in partnership with AEG that allows us to launch at the prestigious Regal L.A. LIVE, provides affirmation of the incredible success and potential of the ICE THEATER format,” said Jocelyn Bouyssy, managing director of CGR Cinemas. “This revolutionary experience is based on a concept designed by an exhibitor for exhibitors, with a focus on a unique business model. This first location has always been known for bringing innovative experiences to moviegoers and the ICE THEATER is a perfect fit, especially in one of the world’s more beautiful locations and capital of the entertainment industry.”

This partnership is the latest example of ICE THEATER’s international expansion, following an earlier announcement that the format is coming to the Middle East and Northern Africa via VOX Cinemas.

“AEG is excited to partner with CGR to have Regal L.A. LIVE: A Barco Innovation Center be the first location in the United States to feature the ICE IMMERSIVE technology,” said Shelby Russell, Sr. Vice President of L.A. LIVE Marketing and Cinemas. “We are always looking to showcase cutting-edge technology to provide movie-goers the best possible experience, and thrilled that our L.A. LIVE movie-goers will be the first in the country to have this one-of-a-kind movie experience.”

The ICE THEATER format comes to the U.S. after seeing great success in France. In fact, while ICE THEATER auditoriums account for 32 of CGR Cinemas’ total 680 screens, 75% of CGR’s box office revenue in 2018 was generated by ICE THEATER screens.

Each ICE THEATER location features luxury seats, Superior Immersive Sound and RGB laser projection, along with the ICE IMMERSIVE experience with LED panels on the side walls

Sony’s “Spider-Man Far From Home” and Universal’s “Fast & Furious Presents: Hobbs & Shaw” are among this summer’s blockbusters set to be released in ICE IMMERSIVE. They join a record number of blockbusters released in the premium format over the past year, including Fox’ “Bohemian Rhapsody” and “X-Men: Dark Phoenix,” Sony’s “Men In Black International” and Warner Bros.’ “Aquaman,” “Annabelle Comes Home” and “Shazam,” to name but a few.

About AEG
Headquartered in Los Angeles, California, AEG is the world’s leading sports and live entertainment company. With offices on five continents, AEG operates in the following business segments: AEG Facilities, which is affiliated with or owns, manages or consults with more than 150 preeminent arenas, stadiums, theaters, clubs and convention centers around the world including The O2 Arena, the Sprint Center and the Mercedes-Benz Arenas; AEG Presents, which is dedicated to all aspects of live contemporary music performances, including producing and promoting global and regional concert tours, music and special events and world-renowned festivals; AEG Real Estate, which develops world-class venues, as well as major sports and entertainment districts like STAPLES Center and L.A. LIVE; AEG Sports, which is the world’s largest operator of sports franchises and high-profile sporting events; and AEG Global Partnerships, which oversees worldwide sales and servicing of sponsorships including naming rights, premium seating and other strategic partnerships. Through its worldwide network of venues, portfolio of powerful sports and music brands, AXS.com ticketing platform, AXS cable television channel and its integrated entertainment districts, AEG entertains more than 100 million guests annually. More information about AEG can be found at www.aegworldwide.com.