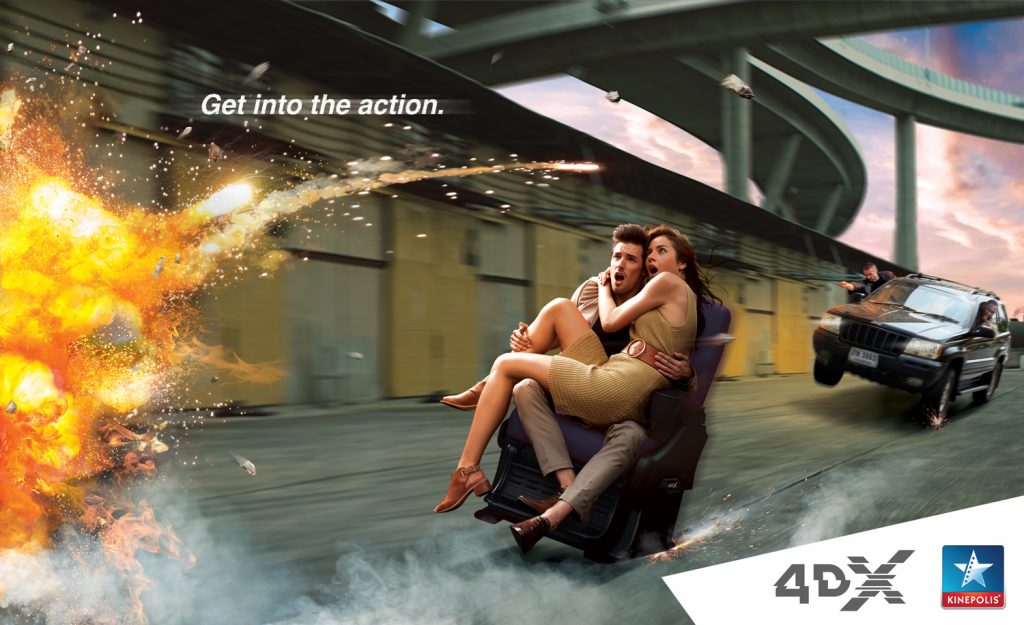 Kinepolis Group has concluded an agreement with CJ 4DPLEX, headquartered in Seoul, to bring the 4DX experience to six additional Kinepolis cinema complexes. Less than one year after the opening of its first 4DX theatres – namely in Antwerp, Brussels, Lomme, Madrid and Valencia – the company has announced six additional 4DX theatres, of which three in Belgium (Kinepolis Hasselt, Ghent and Rocourt), one in Luxembourg (Kirchberg), one in France (Kinepolis Nîmes) and one in Spain (Kinepolis Diversia, Madrid).

CJ 4DPLEX’s 4DX innovative theatre technology enhances the on-screen visuals of action-packed blockbusters, transcending the traditional cinema experience through special effects including motion-synchronized seats, wind, fog, rain, lightning, snow, bubble, vibration, and scents. The result is an unprecedented, immersive movie experience, drawing fans into the action on the big screen. Since the launch of 4DX in 2009, the theatre technology rapidly expanded around the globe. To date, 4DX is installed in 573 theatres, reaching 59 countries, and projected to reach 600 auditoriums by the end of the year.

Eddy Duquenne, CEO of Kinepolis Group, said: “Cinema is all about experiencing emotions together and Kinepolis has always been at the forefront of innovative technology that intensifies this experience. 4DX fits in perfectly with the ongoing broadening of our offer with premium products, allowing us to meet the demands of multiple target groups. As customer satisfaction in our current 4DX locations is high, we wanted to offer this great experience to even more visitors in different multiplex locations.”

“We have seen great expansion of our 4DX cinema technology across Europe, and Kinepolis has been an excellent partner in helping that effort,” said JongRyul Kim, CEO of CJ 4DPLEX. “They have shown us great support and understand our vision to push the limits of what is possible inside of a movie theatre auditorium.”

Seating capacity of the planned 4DX theatres is ranging from 88 to 160 seats. Kinepolis expects to open its 4DX auditoriums in Hasselt, Madrid, and Rocourt by the end of this year. The remaining three theatres will open in the first quarter of 2019.

About CJ 4DPLEX
CJ 4DPLEX is the world’s first 4D cinema company, headquartered in Seoul with international offices in Los Angeles and Beijing. The company created 4DX, the first and leading 4D cinema technology for feature films, providing moviegoers with an immersive cinematic experience that utilizes all five senses, allowing the audience to connect with movies through motion, vibration, water, wind, snow, lightning, scents, and other special effects that enhance the visuals on-screen. CJ 4DPLEX brings 4DX auditoriums to exhibition partners along with 4DX codes for both major Hollywood blockbusters and local titles. Each auditorium incorporates motion-based seating synchronized with more than 20 different effects and optimized by a team of skilled editors, maximizing the feeling of immersion within the movie, beyond the limits of audio and video. Since 2009, more than 570 Hollywood and local titles have been screened in 4DX. As of November 2018, more than 67,000 4DX seats operate in 573 auditoriums spanning 59 countries.

CJ 4DPLEX was named a Most Innovative Company of 2017 in Live Events by Fast Company, and its technology has been recognized with silver Edison Awards in the Media and Visual Communications-Entertainment category in 2015 and 2018. For more information, please visit http://www.cj4dplex.com/.