Kinepolis Emerges Stronger from 2021 After a Turbulent Year 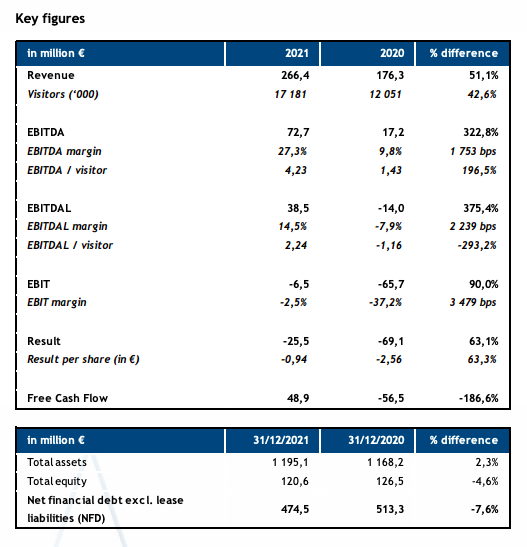 2021 was a year in which the Covid-19 pandemic had an ongoing impact on Kinepolis’ activities, with prolonged closures – mainly in the first half of the year – and reopenings with ever-changing, restrictive measures in almost all countries.

Thanks to strong cost management and one-off support measures, Kinepolis was able to further limit its cash consumption to €3.6 million per month in the first half of 2021. The numerous blockbusters that were released in the second half of the year performed strongly – in a pandemic context – and led to a promising return of visitors to the cinemas. Kinepolis noted an increased demand for premium cinema experiences and higher consumption in all countries, especially in the start-up phase.

This enabled Kinepolis to build up significant cash again in the second half of the year, resulting in €199.8 million of available financial resources at the end of December 2021 (versus €141.9 million at the end of June), as well as a decrease of the net financial debt, excluding lease liabilities, by €67.8 million compared to the end of June 2021.

The result of the second half of the year was largely supported by the implementation of Kinepolis’ ‘Entrepreneurship 2022′ plan, which has now been fully implemented. This concerns cost-saving optimisations as well as innovations that build on Kinepolis’ business strategy and protect the company against a possible slower recovery in visitor numbers from 2022 on.

Eddy Duquenne, CEO of Kinepolis Group, about the results for 2021:
“We did not get the best case-scenario in 2021 for which we had hoped at the start of the vaccination campaign. Nevertheless, I look back with satisfaction on a year in which we, as a company and as a team, did everything that was within our power and which has led to a more than decent result given the circumstances.

We have used the past two years to strengthen our company. We managed to be profitable from a relatively low occupancy rate of our cinemas, something that was supported by the implementation of our ‘Entrepreneurship 2022’ plan, all the measures of which have now been implemented and are effective. We are also continuing to work on our Star plans, which are focused more on innovation and new sources of income, and we have also recently taken steps to further integrate our sustainability policy in our strategy.

All of this, coupled with a promising visitor recovery thanks to high-performing blockbusters, means we can look to the future with confidence. We can already conclude that we shall come out of this crisis stronger and I am very proud of that.”