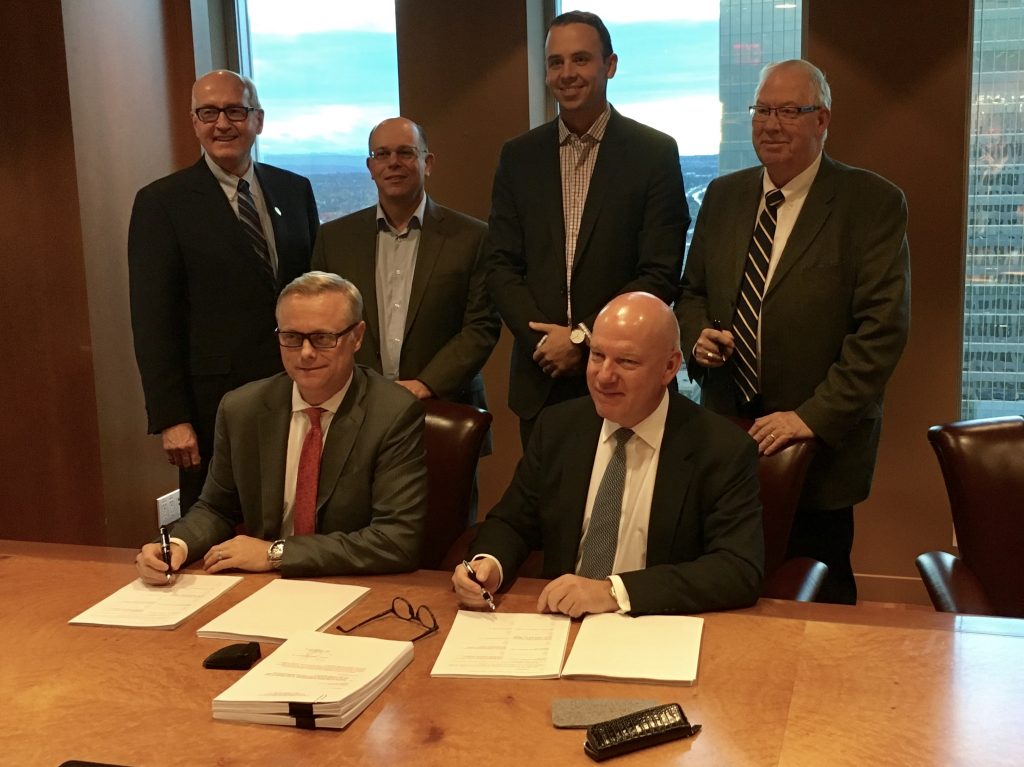 Landmark Cinemas operates 44 movie theatres of various sizes, all located in Central and Western Canada, and has its head office in Calgary (Alberta). The 44 Landmark Cinemas movie theatres, with a total of 55,000 seats and 303 screens, realized CAD 156.3 million turnover in 2016 with 10.2 million visitors. The company is Canada’s second largest cinema operator, with a market share of 10%.

Three quarters of the movie theatres under the acquisition are leased. The group operates two megaplexes (more than 16 screens), 17 multiplexes (more than 8 screens) and 25 smaller movie theatres spread over six Canadian provinces. Landmark Cinemas generates 92% of its turnover in the country’s biggest regions, Ontario, British Colombia and Alberta. Five cinemas have an IMAX screen, another five are equipped with premium large format (PLF) screens and 11 complexes offer the recliner seat[1] experience or are scheduled to do so soon.

Landmark Cinemas expanded significantly in 2013 with the acquisition of Empire Theatres and has since focused on enhancing the customer experience, with great success.

Eddy Duquenne, CEO of Kinepolis Group, says: “I am very proud of this unique opportunity to expand our business into a continent that is expected to offer us many advantages. Furthermore, Landmark Cinemas shares our passion for customer experience. It was the first on the market to introduce the Atom social ticketing system and it successfully upgraded a number of movie theatres to equip them with recliner seats. The management of Landmark Cinemas is very enthusiastic and looks forward to rolling out our three-pillar strategy (of being best cinema operator, best marketer and best real estate manager) in their group and testing our products and experience concepts on the Canadian market. We see it as an opportunity for both groups.”

Brian McIntosh (Executive Chairman) and Neil Campbell (CEO) of Landmark Cinemas say: “The innovative and entrepreneurial culture that we have been fortunate to build over the past 52 years at Landmark aligns perfectly with Kinepolis. Joining the Kinepolis family is a terrific opportunity for everyone at Landmark. Combining with Kinepolis will also give Canadian moviegoers greater access to world class cinema experiences. Landmark’s people will continue to lead the Canadian business and our customers, people and business partners will all benefit from the expertise that Landmark will be able to leverage into Canada from the expertise and strategic vision of Kinepolis.”

The proposed acquisition fits in with the expansion strategy pursued by Kinepolis and enables the Group to enter a new market, characterized by healthy macroeconomic prospects, a growing population and a favourable business climate. Entering a new continent creates a better geographic spread of Kinepolis’ business activities and new growth opportunities, through acquisitions and new-build projects. The agreement with Landmark Cinemas already includes two new-build projects in Alberta province, one in St. Albert and one in Fort McMurray. It also includes plans for more new-build movie theatres.

Kinepolis considers this to be a medium-sized acquisition from a financial point of view. Annualized and normalized EBITDA of Landmark Cinemas in 2017 is between CAD 17 million and CAD 18 million. This is after annualization of the effects of the recliner seat rollout at 11 of the Group’s 44 movie theatres. The annualized and normalized EBITDA contribution per visitor in 2017 is between CAD 1.7 and CAD 1.8 or between €1.2 and €1.25 per visitor, which is lower than the Kinepolis Group average. This is due in part to the fact that leased movie theatres account for 95% of visitors. Landmark Cinemas generated revenue of CAD 156.3 million in 2016, with 58.3% from ticket sales, 37.8% from in-theatre sales (ITS), 2.5% from screen advertising and 1.4% from other revenue.

The acquisition has an enterprise value of CAD 122.7 million, corresponding to an acquisition price of around € 84.2 million at an exchange rate of 1.46.

Kinepolis will manage the Canadian company, which employs 1,450 people, through a local executive management board made up of the current Landmark Cinemas management and supported by an integration team that will introduce Kinepolis’ management approaches and concepts from Europe. In doing so, Kinepolis aims to transfer its self-learning and self-innovating company culture to the new organization.

About Kinepolis
Kinepolis Group was formed in 1997 by a merger of two family-run cinema groups and was first listed on the stock exchange in 1998. Kinepolis proposes an innovative cinema concept that serves as a pioneering model within the industry. Kinepolis Group NV has 48 cinemas spread across Belgium, the Netherlands, France, Spain, Luxembourg, Switzerland and Poland. In addition to its cinema business, the Group is also active in film distribution, event organization, screen advertising and property management. More than 2,300 employees are committed every day to giving millions of visitors an unforgettable movie experience.

After the proposed acquisition, Kinepolis Group will operate 92 cinemas (42 of which it owns), with a total of 802 screens and more than 180,000 seats.