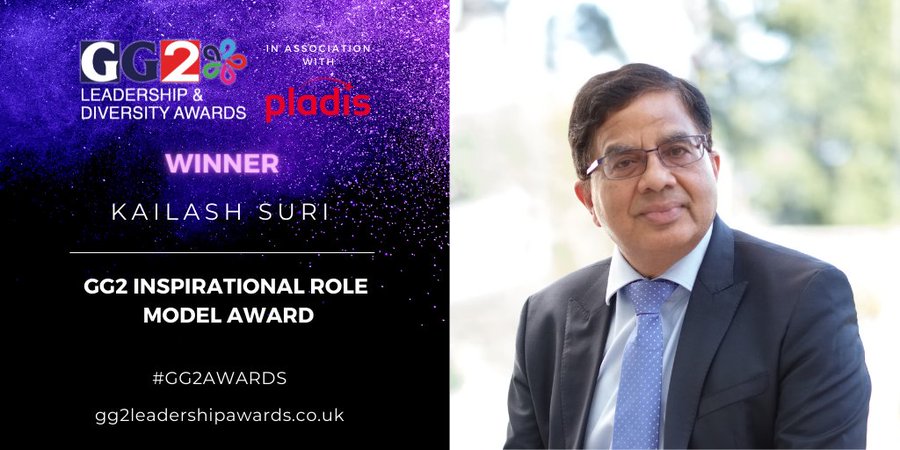 Reel Cinemas was proud to see founder and owner KC Suri declared winner of the Inspirational Role Model award at the GG2 Leadership & Diversity Awards 2022 in London on Tuesday March 8th, rewarding his twenty plus years of hard work & dedication since launching the UK’s leading independent cinema chain in 2001.

Born in Punjab, where he qualified as an engineer, Kailash Suri came to study in the UK in the early 1980s, supporting himself with seasonal strawberry-picking in Leicestershire. His business quickly evolved, cultivating Asian herbs for the local Indian community.

Next came residential & commercial property investments, and the acquisition in 2001 of a cinema in Loughborough. That was the beginnings of Reel Cinemas, now the UK’s leading independent cinema chain.

Reel has certainly shown its resilience in recent years. Expansion plans were well underway in 2019, with new luxury cinemas unveiled at Wakefield (in August) and Chorley (in December). The arrival of the COVID pandemic in early 2020 forced cinemas across the UK to close their doors, with Reel being the last chain to shut (in March) and the first to reopen (in July), when their delayed new-build in Rochdale finally debuted.

Despite an initial reluctance by moviegoers to return and further government mandated cinema closures nationwide, Reel never made any of its staff redundant, and even opened another new site (Blackburn) in May 2021. Plans are now well underway for the opening of the next REEL Cinema in December 2022, a six screen luxury development in Farnham, which will be followed by four more across the UK in 2023/2024.

The personal philosophy and ethos of owner Kailash Suri are at the very core of Reel Cinemas. Since his arrival in the UK Mr Suri has weathered four financial recessions, consequently the ongoing opportunity to provide entertainment to families and local communities is something all members of the Reel team are very proud of.

About the Awards
The GG2 Leadership & Diversity Awards were founded in 1999 by Asian Media Group, Britain’s biggest Asian publishing house, to shine a spotlight on Britain’s most enterprising and talented black, Asian and minority ethnic high achievers. Today, it is the premier awards for inclusion, diversity and leadership in the UK, celebrating outstanding success across a range of sectors, including medicine, law, technology and within the community. The GG2 Power List, chronicling and profiling Britain’s 101 most influential Asians, is launched at the event, shedding light on the eclectic mix of talent within the Asian community.

Today diversity is very much a buzzword, but two decades ago, it was just a phrase barely uttered in boardrooms of the City or in the corridors of power in Whitehall. It’s been one of Asian Media Group’s primary missions to give a voice to ethnic communities, to showcase talent and to celebrate success. And the GG2 Leadership & Diversity Awards has been doing just that for two decades.