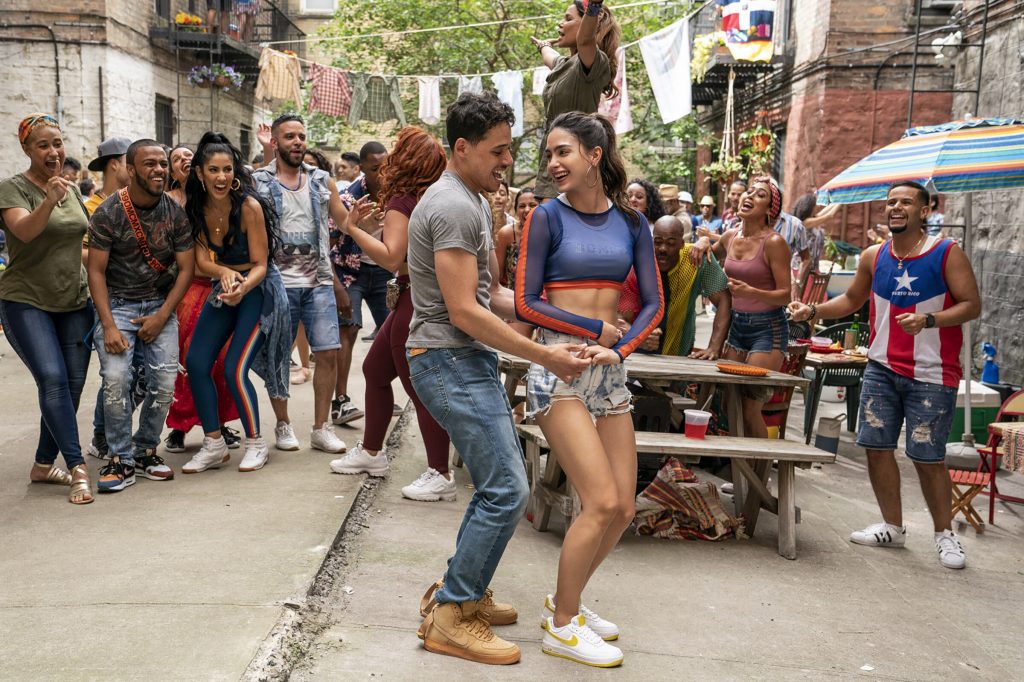 Presented in partnership with the San Francisco Giants, with support from the City and County of San Francisco, Pride Movie Nights at Oracle Park will feature director Jon M. Chu’s Summer event film, the adaptation of Lin-Manuel Miranda’s Tony Award­­­­-winning musical, “In the Heights,” plus a second soon-to-be-announced feature film.

For the first time ever, Frameline and San Francisco Pride will present Pride Movie Nights at Oracle Park on Friday, June 11 and Saturday, June 12, 2021. A natural extension of Frameline and SF Pride’s decades-long, mutually advantageous relationship, this socially distanced and ticketed event (subject to state-mandated capacity limits) is further strengthened by a partnership with Giants Enterprises and support from the City and County of San Francisco. Guests of Pride Movie Nights at Oracle Park are required to wear masks at all times except when eating or drinking.

On Friday, June 11, audiences will be treated to director Jon M. Chu’s long-awaited film adaptation of Lin-Manuel Miranda’s Tony Award-winning musical, “In the Heights.” Lights up on Washington Heights… The scent of a cafecito caliente hangs in the air just outside of the 181st Street subway stop, where a kaleidoscope of dreams rallies this vibrant and tight-knit community. At the intersection of it all is the likable, magnetic bodega owner Usnavi (Anthony Ramos), who hopes, imagines, and sings about a better life. “In the Heights” fuses Miranda’s kinetic music and lyrics with director Chu’s lively and authentic eye for storytelling to capture a world that is very much of its place, but universal in its experience.

“I can’t think of a better way to kick-off Frameline45 than with an in-person screening of Jon M. Chu’s highly anticipated film adaptation of ‘In the Heights,’ a film that celebrates the spirit of community,” said James Woolley, Executive Director of Frameline. “We are honored to partner with San Francisco Pride and Giants Enterprises on this first-ever movie night and look forward to bringing audiences together from throughout the San Francisco Bay Area to share in this collective experience.”

“Our theme this year is ‘All in This Together,’ and after 15 months of distance and separation, we’re finally able to come together safely as a community,” said Fred Lopez, Executive Director of San Francisco Pride. “We’re optimistic that current trends will continue, so by June we’ll get to see and hear our friends and allies at Oracle Park cheering, laughing, and simply being together. We know that this is what our communities have been aching to experience for more than a year, and we’re confident that our team will create a safe, welcoming environment that’s memorable, too.”

“I’m thrilled that Pride and Frameline are about to take over a ballpark,” said Carolyn Wysinger, President of San Francisco Pride’s Board of Directors. “There’s a part of Pride that’s somber and commemorative of our history, and a part of Pride that feels more like Mardi Gras. We’re making sure that the stage and scoreboard have people of color strongly represented. This is going to be a party.”

Pre-movie festivities will take place each evening at Oracle Park beginning at 6:30 p.m. with a lineup of in-person and virtual appearances, along with SF Pride 2021’s Community Grand Marshals. The movie screenings will begin at 8 p.m. each evening. In the absence of a traditional Parade and Celebration for the second year, SF Pride’s staff and Board of Directors are thrilled to welcome the Bay Area’s LGBTQ+ communities for back-to-back evenings of entertainment that centers diversity, uplift, and joy. As a venue, Oracle Park is uniquely able to balance the need for public safety and social distancing with a desire for togetherness and visibility. Rounding out the feature presentations, Pride is particularly pleased to work with Giants Enterprises to create a diverse showcase of local talent and established acts.

General Admission tickets are priced at $24.99 and are located in Lower Box Sections 101–135. General Admission ticket holders have access to food and beverage options on the promenade, as well as in-seat ordering. Club Level Experience tickets are priced at $44.99 and are located in Club Level Sections 202–217. Club Level Experience ticket holders have access to an exclusive food and beverage experience only available on the Club Level. This exclusive food and beverage experience is also available for in-seat ordering. The On-Field Experience package is priced at $2,499.96 and includes tickets for up to 12 guests. These tickets grant patrons access to a 20’ x 20’ “pod” in the outfield. Soft seating will be provided, as well as a welcome snack and one free alcoholic beverage for every 21+ adult. On-Field Experience ticket holders will be able to order from a carefully curated menu with gluten-free, vegan, and vegetarian options available. A member of the San Francisco Pride team will contact ticket buyers to secure any food or beverage pre-orders. These pre-orders will be delivered as soon as patrons check-in at their assigned pod. To purchase tickets, visit www.frameline.org/pridemovienight. Ticket buyers can download the free MLB Ballpark app to allow for contactless entry and to place mobile food and beverage orders at Oracle Park.

“The San Francisco Giants are excited to have fans back at Oracle Park and look forward to collaborating with our community partners to host such an iconic San Francisco celebration,” said Stephen Revetria, President of Giants Enterprises. “We can’t wait to safely gather again and watch ‘In the Heights’ light up the scoreboard and city. We are incredibly grateful for the partnership between San Francisco Pride, Frameline, Warner Bros. Pictures and the City and County of San Francisco as we collectively work towards two incredible evenings in June.”

“It’s such an honor to be able to share this film with the city that I grew up in. ‘In the Heights’ reflects the same sense of community, pride and joy that this event represents,” said director Jon M. Chu. “I hope that this film will inspire others as Frameline and SF Pride have continued to do in this next chapter of returning to see each other again.”

Chu directed the film from a screenplay by Quiara Alegría Hudes; it is based on the musical stage play, with music and lyrics by Lin-Manuel Miranda, book by Quiara Alegría Hudes and concept by Miranda. “In the Heights” was produced by Miranda and Hudes, together with Scott Sanders, Anthony Bregman, and Mara Jacobs. David Nicksay and Kevin McCormick served as executive producers.

Behind the camera, Chu is reunited with his “Crazy Rich Asians” production designer, Nelson Coates, and editor, Myron Kerstein. He also collaborated with director of photography Alice Brooks (TV’s “The Walking Dead”) and costume designer Mitchell Travers (“Eighth Grade”). Original songs by Miranda. Alex Lacamoire and Bill Sherman served as executive music producers. The choreography is by Christopher Scott, who previously teamed with Chu on the award-winning “The Legion of Extraordinary Dancers.”

“In the Heights” was filmed in New York, primarily on location in the dynamic community of Washington Heights. Warner Bros. Pictures Presents a 5000 Broadway/Barrio Grrrl!/Likely Story/SGS Pictures Production, A Jon M. Chu Film, “In the Heights.” Distributed worldwide by Warner Bros. Pictures and opening in the U.S. in theaters and on HBO Max on June 11, it will be available on HBO Max for 31 days from theatrical release. The film is rated PG-13 for some language and suggestive references.

Slated to be the most attended and longest festival in Frameline history, The Frameline45 San Francisco International LGBTQ+ Film Festival will take place June 10-27, 2021, will include a mix of in-person and virtual offerings—with the first week presenting only outdoor and drive-in events, and the last 11 days bringing the biggest lineup of new and virtually-accessible LGBTQ+ films in the world directly to your home. Tickets for Frameline45 will go on sale to the general public beginning Tuesday, May 25.

San Francisco Pride typically welcomes hundreds of thousands of LGBTQ+ people and allies to its annual Parade and Celebration on the final weekend of June. For 2021, in keeping with public-health guidelines, the 51-year-old organization has chosen to produce smaller, in-person events. Beyond SF Pride Movie Night at Oracle Park, the Board of Directors and staff are working with the African American Art & Culture Complex on a solidarity rally on Friday, June 18 (the eve of Juneteenth), as well as an outdoor event on National Coming Out Day in October.

About Frameline
Frameline’s mission is to change the world through the power of queer cinema. As a media arts nonprofit, Frameline’s integrated programs connect filmmakers and audiences in San Francisco and around the globe. Frameline provides critical funding for emerging LGBTQ+ filmmakers, reaches hundreds of thousands with a collection of over 250 films distributed worldwide, inspires thousands of students in schools across the nation with free films and curricula through Youth in Motion, and creates an international stage for the world’s best LGBTQ+ film through the San Francisco International LGBTQ+ Film Festival and additional year-round screenings and cinematic events.