Event Cinema Release of “Kinky Boots The Musical” Struts to £1.2 Million at the UK Box Office 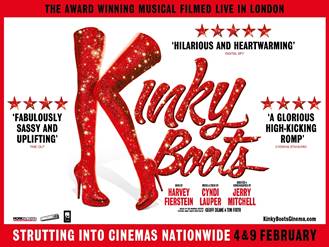 More2Screen, the award-winning Event Cinema distributor, today confirms that the cinema release of “Kinky Boots The Musical” has taken £1.2million at the box office to date and it was the #1 film on Tuesday 4th February.

Christine Costello, CEO and Founder of More2Screen said, ‘This superb box office result demonstrates the huge enthusiasm for watching West End musicals at the cinema and we’d like to thank everyone involved for their help in bringing this fabulous, feel-good production to the big screen.’

Encore screenings are on sale now, visit KinkyBootsCinema.com for participating cinemas and to book tickets.

About More2Screen
More2Screen is a leading distributor of Event Cinema with an unparalleled reputation among its blue-chip partners for professionalism, responsiveness and the delivery of great cinema events to audiences around the world for a maximum commercial return. Founded in 2006 by CEO Christine Costello, it has been a global pioneer in the harnessing of digital technology to bring the very best in live music, performance arts and cultural entertainment to local cinema audiences. In collaboration with its stellar list of long-standing content partners, More2Screen has acted as consultants, producers and worldwide distributors in bringing over 150 ‘special event’ productions to its network of more than 7,000 cinemas in 65+ international territories. Its extensive catalogue of world-class productions from across the cultural spectrum is second to none and includes many sector ‘firsts’. More2Screen is proud to have been named Global Box Office Award winner in 2014, 2015 and 2018, winner of the inaugural Best European Distributor award in 2015 (Event Cinema Association), and a Highly Commended Award in 2019. A Screen International Screen Awards finalist in 2015, 2016 and 2017, More2Screen won the Screen Award ‘Event Cinema Campaign of the Year’ category in 2018 for the live broadcast of the musical “Everybody’s Talking About Jamie”. More2Screen has recently distributed Matthew Bourne’s “Swan Lake” and “Romeo + Juliet”, special art exhibition event, Gauguin from the National Gallery, London and the award-winning hit musical 42nd Street. The slate for 2020 includes new releases “Jonas Kaufmann My Vienna” and the “Riverdance 25th Anniversary Show”.