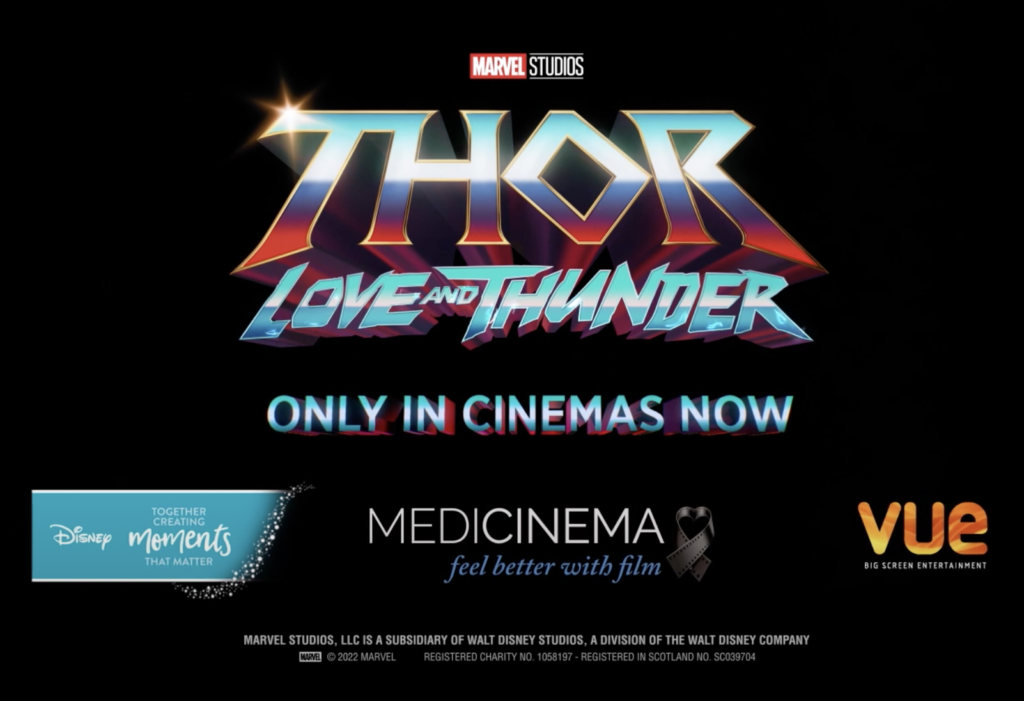 To mark the much-anticipated release of their movie “Thor: Love and Thunder” Marvel Studios (a division of the Walt Disney Company) will match Vue customer donations made to MediCinema when booking the film online, up to a total of £50,000. Match funding started from the pre-sales launch on June 13th and will run until August 31st 2022.

Vue customers are given the option to make a 50 pence donation to MediCinema when they book to see a film online. This partnership with MediCinema has been in place since 2018 and to date has raised more than £600,000 for the charity.

MediCinema is one of four long-standing charities in the UK supported by Disney, a partnership which started when the charity was founded over 20 years ago.

To encourage customers to donate, Natalie Portman who plays Jane Foster/Mighty Thor alongside Chris Hemsworth’s Thor, has recorded a special message. In the video which you can view here, Natalie says:

“We all know the excitement of going to the movies, watching tales that unite and empower us, make us laugh and bring us hope. But for patients and their families in hospital, experiencing the joy of the big screen isn’t always possible. MediCinema is a charity dedicated to helping patients feel better with film, transporting them away from the hospital wards and on a cosmic adventure, like only a movie can. When you buy a ticket online to see “Thor: Love and Thunder” in any Vue in the UK and add a donation to MediCinema; Marvel Studios (a division of the Walt Disney Company) will match total donations up to £50,000 until the 31st of August, to help more patients and their loved ones visit an in-hospital cinema.”

Sara Hanson, Director, Enterprise Social Responsibility EMEA & UK The Walt Disney Company said: “Our partnership with MediCinema is a great example of how, through the power of stories and working together, we can create Moments that Matter—bringing comfort and joy to patients and their loved ones when they need it the most. MediCinema helps patients everyday feel better with film across the country; that’s why we are proud to be teaming up with Vue UK to help raise awareness and funds to enable more patients to have this experience.”

Colin Lawrence, MediCinema CEO said: “We are so grateful for the fantastic support we have from Vue UK and their customers, and Disney UK, our two biggest partners. I know that these donations will have such a positive impact on the wellbeing of NHS patients coming to see a film in one of our cinemas.”.

Toby Braden, General Manager of Vue UK, Ireland & Denmark said, “We’re proud to support MediCinema and the great work the charity does. We’ve been in partnership for four years and have seen first-hand the true magic, escapism and experience MediCinema provides to those who need it. At Vue, we too believe in the power of the Big Screen. It’s great that Marvel Studios will be matching Vue customer donations until the end of August for “Thor: Love and Thunder”. This support will further boost the overall donation MediCinema receives. We look forward to welcoming customers into Vue to see “Thor: Love and Thunder” and, of course, to raise funds for Medicinema”.

MediCinema also worked in partnership with Disney to arrange a special premiere screening of the film on Tuesday 5th July at the same time that the red-carpet UK Gala screening was taking place in London.

Patients at the CW+ MediCinema at the Chelsea and Westminster Hospital were treated to this exclusive preview, with “Thor: Love and Thunder” goody-bags and posters to take back to the wards. To date, Disney has created numerous once-in-a-lifetime activities across MediCinema sites, bringing the power of their stories and characters to help build emotional resilience.

About MediCinema
MediCinema is a charity which improves the wellbeing and quality of life of NHS patients and their families through the power of the shared cinema experience and the magic of film. It builds and runs cinemas in hospitals equipped with space for beds, wheelchairs, and medical equipment. Its services help to improve emotional, mental, and physical health, reducing feelings of isolation, anxiety, and stress, and increasing patient resilience. Since MediCinema was founded in 1999 it has given more than 300,000 experiences to patients, their families, carers and those closest to them.

About “Thor: Love and Thunder”
Marvel Studios’ “Thor: Love and Thunder” finds the God of Thunder (Chris Hemsworth) on a journey unlike anything he’s ever faced – one of self-discovery. But his efforts are interrupted by a galactic killer known as Gorr the God Butcher (Christian Bale), who seeks the extinction of the gods. To combat the threat, Thor enlists the help of King Valkyrie (Tessa Thompson), Korg (Taika Waititi) and ex-girlfriend Jane Foster (Natalie Portman), who – to Thor’s surprise – inexplicably wields his magical hammer, Mjolnir, as the Mighty Thor. Together, they embark upon a harrowing cosmic adventure to uncover the mystery of the God Butcher’s vengeance and stop him before it’s too late.

As well as being a responsible business, Disney is dedicated to providing comfort and inspiration to those in need and creating inspiration and opportunity for those who want to improve their world. Disney’s long-standing partnership with MediCinema is an example of how, through working with others, we help build emotional resilience. Together we bring the power of our brand, stories and characters to inspire and create Moments that Matter for children and those closest to them when they need it the most. In 2021, we created over 58,000 life-changing moments across Europe. For more information on our programmes and our long-standing charitable partners please visit www.thewaltdisneycompany.eu