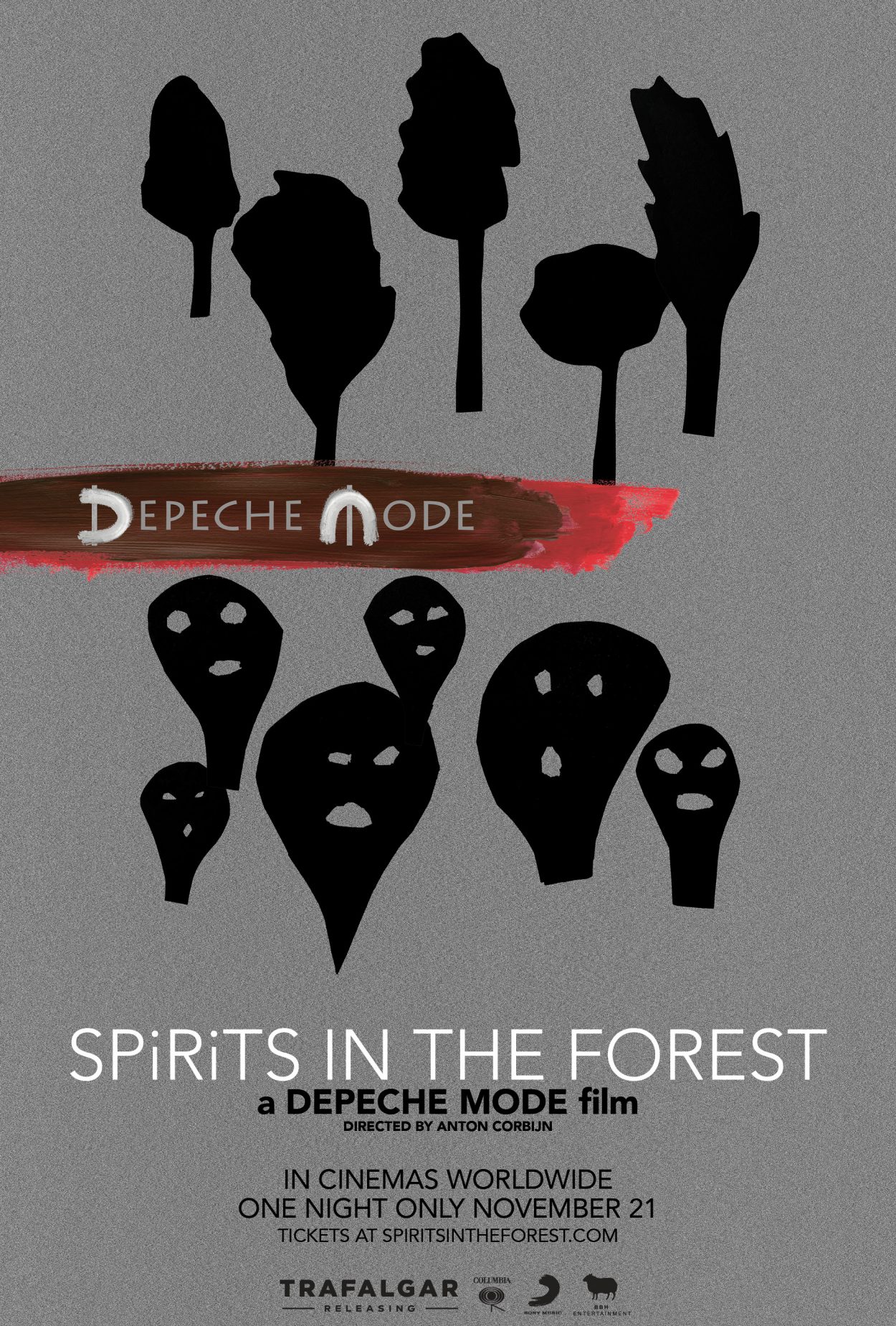 Featuring Emotional Stories Highlighting the Universal Power of Music, Interwoven With Performances From the Band’s Record-breaking 2017/2018 Global Spirit Tour, the Film Will Be Premiered by Trafalgar Releasing and Sony Music Entertainment as a Worldwide, Special, One-night Theatrical Event on November 21, 2019

Depeche Mode, along with Trafalgar Releasing, Sony Music Entertainment and BBH Entertainment, are excited to announce the upcoming release of the new feature-length documentary and concert film, “SPIRITS in the Forest”, coming to cinemas worldwide for a one-night event on November 21. The film will bring fans together around the world to celebrate the impact of Depeche Mode’s music and performances. “SPIRITS in the Forest” will be screened in more than 2,400 cinemas, from Adelaide to Zagreb, in over 70 countries.

Directed by award-winning filmmaker and long-time artistic collaborator Anton Corbijn, the release of “Depeche Mode: SPIRITS in the Forest” follows the band’s 2017/2018 Global Spirit Tour, which saw them play to over 3 million fans at 115 shows around the world.

Diving into the deeply emotional stories of six special Depeche Mode fans, the film weaves together exhilarating musical performances filmed at the final shows of the tour at Berlin’s famed Waldbühne (“Forest Stage”) with intimate documentary footage filmed in the fans’ hometowns across the globe. It shows not only how and why the band’s popularity and relevance has continued to grow over the course of their career, but provides a unique look into music’s incredible power to build communities, enable people to overcome adversity, and create/ connections across the boundaries of language, location, gender, age, and circumstance.

“I’m exceptionally proud to share this film and the powerful story that it tells,” said Dave Gahan, of Depeche Mode. “It’s amazing to see the very real ways that music has impacted the lives of our fans.”

Added Martin Gore, “In today’s world of turmoil and divisiveness, music really can be a force for good and can bring people together.”

Marc Allenby, CEO of Trafalgar Releasing has said on the news: “Trafalgar Releasing are excited to be working with Sony Music and the Depeche Mode team on the upcoming release of “SPIRITS in the Forest”. As a band who have always been on the cusp of innovation with their unique sound, we look forward to bringing fans around the world together to celebrate one of the most exciting and influential music acts of the last century.”

This year has been strong for music releases from Trafalgar Releasing in cinema. Recent successes have included “Bring The Soul: The Movie”, which became the single largest event cinema release globally, Grateful Dead’s 9th Annual Meet-Up at the Movies, Tribeca documentary “Between Me and My Mind” about Phish frontman, Trey Anastasio, Rush Cinema Strangiato 2019 and “The Cure: Anniversary 1978-2018 Live in Hyde Park London”.

Trafalgar Releasing’s music slate also includes the upcoming “Roger Waters Us + Them”, which recently received its World Premiere at the International Venice Film Festival, “Metallica and San Francisco Symphony: S&M²” and “Shakira in Concert: El Dorado World Tour”. The London based outfit have previously released films including “Coldplay: A Head Full of Dreams”, “The Music Center presents Joni 75: A Birthday Celebration”, “Khalid Free Spirit”, “One More Time with Feeling”, among others.

“Depeche Mode: SPIRITS in the Forest” will be screened in cinemas around the world on November 21. Tickets are on-sale from September 26 at spiritsintheforest.com, where fans can find the most up-to-date information regarding participating theaters and sign up for event alerts.