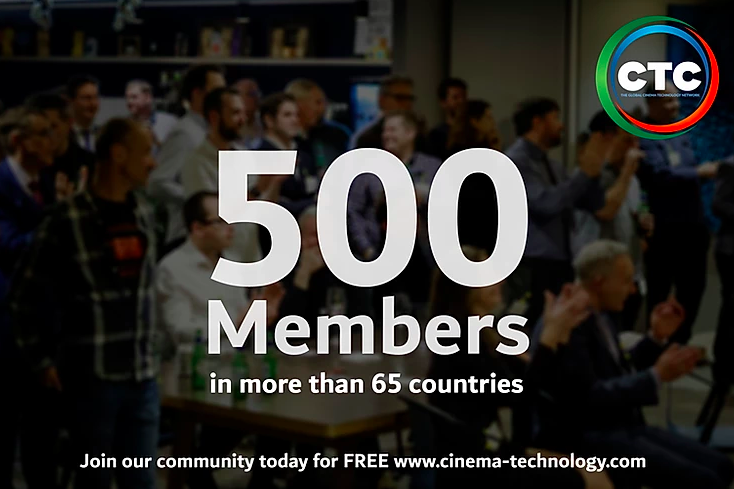 Cinema Technology Community (CTC), the not-for-profit independent trade organisation has provided an update on its progress and two significant changes to its leadership team.

Since its reformation in 2017, CTC has focused on serving the global cinema industry and has built a loyal and engaged membership base. At the start of the Covid-19 crisis, which has caused an unprecedented level of disruption to the cinema industry, CTC responded by creating a new membership level designed to help the industry collaborate and share knowledge and learn during difficult times.

The response has been phenomenal and today CTC has announced that it now has a global membership of over 500 cinema industry professionals from more than 65 countries.

Commenting on the news, Richard Mitchell, President of CTC said “The global response to our Community Membership programme and our outputs has been incredible and the team are proud that we now have a membership of over 500 professionals. The team are passionate about delivering educative materials and giving back to an industry they feel incredible proud to be a part of,” explains Richard Mitchell, President of CTC.

“Toni has been a mainstay of CTC for many years providing her incredible depth of knowledge on projection, distribution and post-production across many of CTCs deliverables. As well as becoming a respected international speaker, Toni has become a key part of the ongoing “In The Pub with Mike Bradbury” podcast series and continues to flourish with every task she undertakes. In recent times she has taken on more responsibility for the organisation and her move in to a Directorship position of the organisation is thoroughly deserved,” explains Mitchell. “Chris bring a wealth of knowledge to the team in projection, mastering, QC and distribution and he will provide us with more expertise to expedite some of our planned deliverables going forward.”

About CTC
With over 500 members in more than 65 countries, Cinema Technology Community (CTC), the global cinema technology network, is an independent, not-for-profit membership organisation that aims to assist the cinema industry in recognizing the importance that cinema technology and indeed the way in which it’s utilized can have a profoundly positive effect on the movie-going experience.