Consistent Implementation of Business and Expansion Strategy Results in 7.3% Higher Revenue and 10.6% Higher EBITDA for Kinepolis in the First Half-Year 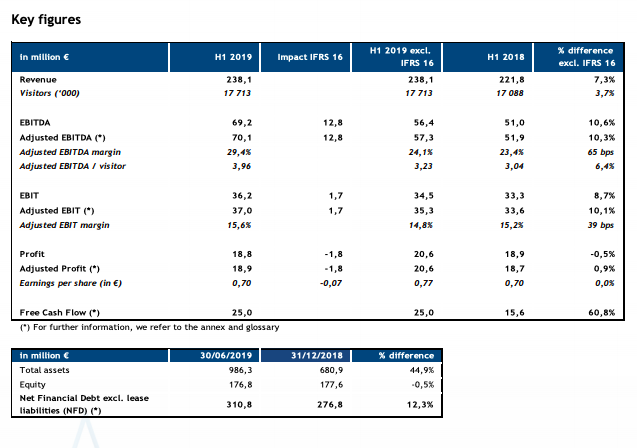 The integration of Landmark Cinemas Canada and the recently acquired Spanish El Punt cinemas is progressing successfully. The Kinepolis concepts that have been introduced to the Canadian market in recent months are being well received, which gives confidence in the potential of a further roll-out.

The further implementation and development of the business strategy, and product innovation in particular, led to a further increase in sales and EBITDA per visitor at Group level. The high visitor figures in the second quarter, which were due to a strong film offer and the absence of a football World Cup, more than compensated for a more difficult first quarter.

“The further implementation of our business strategy, which is driven by a continuous culture of improvement and innovation, made it possible to perfect the customer experience even more in the first half of the year, resulting in further growth of revenue and profitability per visitor.

This approach helps us in the execution of our expansion strategy, as it allows us to deliver on our investments. Various Kinepolis concepts have been introduced onto the Canadian market and are being well received. This proves that we can leverage our know-how in new markets as well.

Compared to the second quarter of last year, visitor numbers were significantly higher, thanks to, among other things, the absence of the football World Cup and a strong line-up, with ‘Avengers: Endgame’ as the absolute blockbuster. Belgium suffered from a difficult comparison with the first semester of 2018, due to the exceptionally strong local content in the spring of last year. In the meantime, thanks to a good summer holiday and the success of ‘The Lion King’, Belgium has closed the gap completely.

The successful placement of bonds, for a total amount of € 225 million, not only allows us to refinance our investments in the long term, but also provides us with the necessary resources for the further financing of our expansion strategy.”

2 Under IFRS, EBITDA is not a recognised figure. Kinepolis Group defined the concept by adding to the operating result the depreciations, write-downs and provisions booked and deducting any reversals or practices from the same headings.

3 New IFRS standard with regard to the processing of lease contracts.

4 All comparisons are with respect to the first half of 2018.

5 Press release based on unaudited figures.