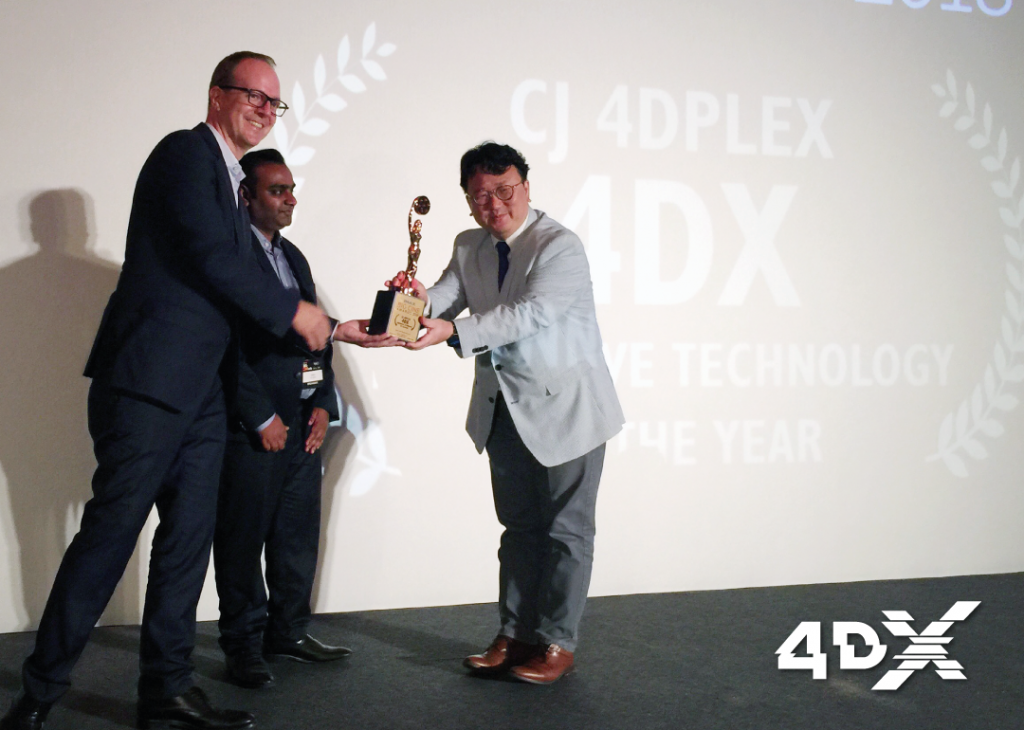 CJ 4DPLEX, the world’s first and largest 4D cinema company, has received the “Innovative Technology of the Year” award at Big Cine Expo 2018 for its industry-leading immersive cinema technology, 4DX.

First launched in 2009, 4DX has continued to grow into one of the most innovative, successful and award-winning technologies, paving the way for the future of the industry. Through the first seven months of this year, more than 15 million people experienced the motion seats and environmental effects such as rain, wind, snow, bubbles and various scents that accompany and enliven the on-screen storytelling of the world’s biggest blockbusters.

The “Innovative Technology of the Year” award is presented annually at the Big Cine Expo to honor the technical excellence of professionals in cinema exhibition industry around the globe and to applaud the innovative technologies that have successfully carved a space for themselves in this highly competitive industry.

Over the past 12 months, 4DX expansion in Asia and India has been extensive, a growth of 38 percent. This includes the addition of 92 new screens across India, China, Japan, Korea, Malaysia, Mongolia, and Thailand.

“We are honored to be recognized for our achievements bringing innovative technology to cinemas around the world,” said CJ 4DPLEX CEO Byung-Hwan Choi. “Our success is a result of hard work by a growing team, and most importantly, our strong partnerships at the studios and within the exhibition community internationally. We look forward to continuing to work together with our friends in the industry to bring even more new innovation to the movies.”

Big Cine Expo 2018 is produced in association with TheatreWorld, a trade magazine for Theatre Owners, Cinema Equipment Manufacturers, and Technology Providers, and is an innovative publication for the global Cinema and Entertainment Industry. Founded in 1999, TheatreWorld has international reach and is focused on the Single-Screen and Multiplex cinema markets, with an emphasis on the latest technological developments, market trends, and the latest news and views in the ever-changing cinema exhibition business.

CJ 4DPLEX is the world’s first 4D cinema company, headquartered in Seoul with international offices in Los Angeles and Beijing. The company created 4DX, the first and leading 4D cinema technology for feature films, providing moviegoers with an immersive cinematic experience that utilizes all five senses, allowing the audience to connect with movies through motion, vibration, water, wind, snow, lightning, scents, and other special effects that enhance the visuals on-screen. CJ 4DPLEX brings 4DX auditoriums to exhibition partners along with 4DX codes for both major Hollywood blockbusters and local titles. Each auditorium incorporates motion-based seating synchronized with more than 20 different effects and optimized by a team of skilled editors, maximizing the feeling of immersion within the movie, beyond the limits of audio and video. Since 2009, more than 550 Hollywood and local titles have been screened in 4DX. As of August 2018, more than 65,000 4DX seats operate in 552 auditoriums spanning 59 countries.